Get the app Get the app
News & Media P&E: Ownership

Two nearly identical Cessna 172S models take the runway side by side for a real-world test of whether vortex generators make a measurable performance difference. 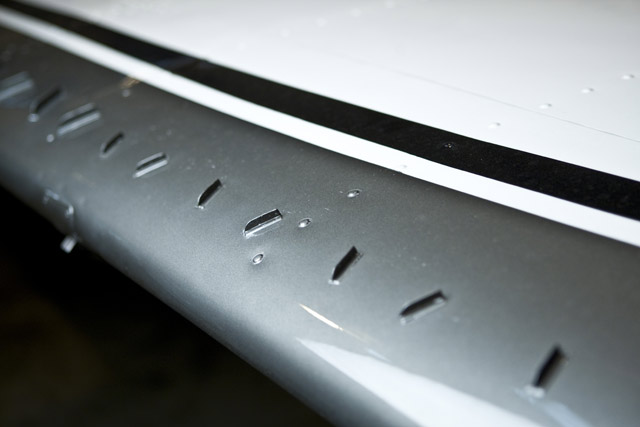 Two nearly identical Cessna 172S models take the runway side by side for a real-world test of whether vortex generators make a measurable performance difference. The pilots release the brakes together, and add full power.

Both airplanes have full fuel tanks, and the pilots each weigh about 180 pounds. The only difference: One airplane has a set of Micro Aerodynamics vortex generators (VG) installed on the wings. The other airplane has a stock “clean wing.”

The two airplanes accelerate together with wing flaps up, and after a ground roll of about 600 feet, both pilots start to pull back on the yokes, increasing the wings’ angle of attack and generating lift. The VG-equipped airplane breaks free of the pavement at about 900 feet, its stall warning horn chirping momentarily. The clean-wing airplane stays on the ground for about 150 additional feet.

Observation one: VGs provide a clear takeoff distance advantage by shortening the ground roll by about 15 percent.Climbing at best-rate airspeed, the two airplanes are well matched, and there’s no noticeable performance difference. We level off at 3,500 feet and keep the throttles wide open to measure cruise performance. The two airplanes stay even at redline rpm.

Observation two: The VGs have no discernable speed penalty at high cruise.We slow the airplanes side by side in level flight with wing flaps up. At about 50 KIAS, the clean-wing airplane stalls and the nose drops about 25 degrees. The VG-equipped airplane continues decelerating, and a stall break never happens. It simply mushes and buffets in a nose-high, wings-level descent of 1,000 to 1,500 fpm. An accurate airspeed is difficult to discern because the angle of attack is so high that the airspeed indicator reads zero.

Observation three: VGs lower the power-off stall speed and virtually eliminate a power-off stall break. At cruise power, the pilot of the VG-equipped airplane makes a series of 60-degree-bank, 2-G turns at airspeeds as low as 70 KIAS and the wing doesn’t stall. The clean-wing airplane stalls at about 74 KIAS in a 60-degree bank turn.

Observation four: VGs lower the accelerated stall speeds (and reduce turn radius).At cruise power, the VG-equipped airplane performs a series of departure stalls. The stall break is slightly right-wing down and is preceded by the stall warning horn and moderate aerodynamic buffeting. The angle of attack at which the wing stalls is so high that the airspeed indicator reads zero at the break. Also, the ailerons remain effective during and after the stall break.

Observation five: VGs reduce power-on stall speeds and keep the ailerons effective during and after the stall break. We return to the airport together for landing and set up a long, two-mile final approach at full (30 degrees) flaps. The clean-wing airplane slows to 60 KIAS with a 500-fpm rate of descent, and the VG-equipped airplane matches it.

In sum, the VG-equipped airplane delivered noticeable performance improvements and no speed penalty at cruise. But VGs also enhance handling qualities in ways that are more subjective and harder to quantify. Ailerons feel more effective at low airspeeds and high angles of attack. The elevator seems more authoritative and lighter in the landing flare. A reduced final approach speed doesn’t bring that “elevator shaft” sense that the bottom is about to drop out from beneath you.

The cost of the VG kit is $1,450 and installation at Advanced Helicopter Concepts in Frederick, Maryland, including an IA signoff, was about $700. Whether the benefits are worth the cost will vary depending on how and where you fly. If you carry heavy loads to short or rough high-altitude airstrips, the VGs could be a big plus. If you fly light loads to long, paved, low-elevation runways, you may not need them.

But when pilots get to choose between which of these 172s they want to fly, I suspect they’ll pick the VG airplane just about every time.