1. After Bob Hoover escaped during World War II from Stalag Luft 1, a German prisoner-of-war camp, he stole a Focke-Wulf Fw 190 and flew it to safety in the Netherlands. The instrument panel had only German markings and an unfamiliar assortment of switches and levers. Since he did not speak or read German, how did Hoover manage to start the engine? 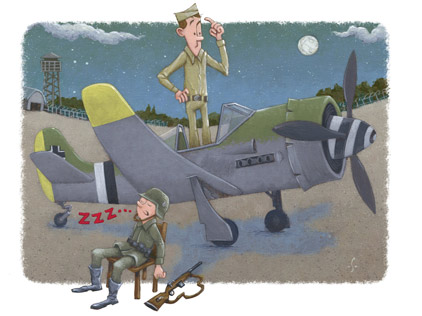 2. Which of the following does not belong?

3. From reader George Shanks: Pilots need to be familiar with a variety of V-speeds, such as VX, VY, VNE, and so forth. Why is the letter V used to designate these speeds?

4. Airframe manufacturers of yesteryear created some cryptic model designations for their aircraft. Among such aircraft were the Meyers OTW and the Howard DGA. What do these letters signify?

5. Following World War II what famous pilot and Medal of Honor recipient was frequently seen on television as a professional wrestler and referee?

6. True or False? A rapid and total loss of engine oil in flight is indicated by a loss of oil pressure and confirmed by an indication of increased oil temperature.

7. During preflight run-up, a pilot determines that his engine runs rough on one magneto and decides to taxi to a maintenance facility. Why might it be a good idea to taxi back using only the malfunctioning magneto?

8. With the exception of Rogers (dry) Lake at Edwards Air Force Base in Southern California, which is several miles long, what is the longest runway in the United States and how long is it?

1. Hoover had a pistol that he used to convince a mechanic at the airport to start the engine for him. “After that,” Hoover says, “it was just another airplane.”

2. (d.) The other answers are possible characteristics of a stall (in addition to buffeting and the activation of a stall-warning system).

3. It does not stand for velocity, which is both a speed and a direction (a vector). According to the FAA, the V used in V-speeds comes from vitesse, which is French for speed.

6. False. The indicated oil temperature might actually decrease because there will not be any oil flowing past the temperature-sensing probe in the engine.

7. Running an engine on only the malfunctioning magneto makes it easier to identify a possibly defective spark plug. After shutdown, carefully touch each rocker-arm cover with the back of a hand. The one that feels relatively cold is the cylinder with the bad plug. (This technique works best with engine cowlings that open or can be removed easily.)