Get the app Get the app
Already a member? Please login below for an enhanced experience. Not a member? Join today
News & Media Never Again: The long and winding river

I made a poor decision to attempt a flight into unfamiliar terrain, with marginal weather, and without a chart to follow. 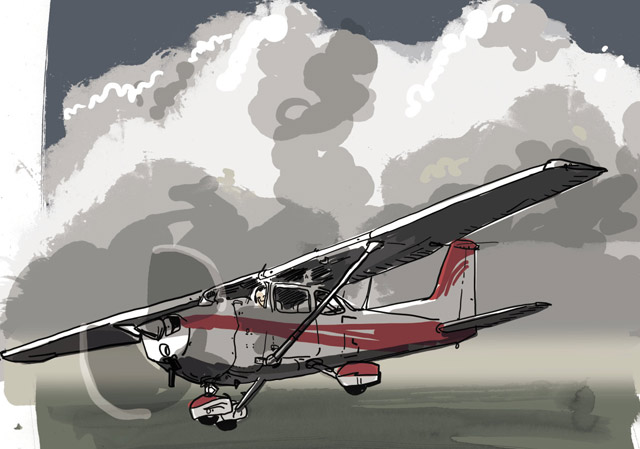 As a private pilot aspiring to earn a commercial certificate, I took every opportunity to build flight time. I was attending Utah State University in Logan, Utah, pursuing a degree in aviation while working full time. My wife and kids had driven to visit family in Slate Creek, Idaho, several days earlier. I had work and school obligations, so I planned to fly up to join them for the weekend.

I rented a Cessna 172 from the local flight school. The plan was to land at Idaho County Airport in Grangeville, but weather was moving in over the mountains, lowering ceilings with steady rain. I saw deteriorating weather a few miles ahead. The ceiling appeared to drop to the surface, so I decided to land at Slate Creek. The approach was simple yet scenic alongside the Salmon River.

When it was time to return home, the unsettled weather remained, with rainshowers in every direction. A standard briefing revealed that marginal VFR conditions prevailed for the first half of the return flight. Mountaintops were forecast to be obscured, with overcast cloud bases 2,000 to 3,000 feet agl.

I questioned the safety of departing the area for the return flight, but since I could see the cloud bases approximately 2,000 feet high up on the mountains, I decided to give it a try. Shortly after takeoff I saw clouds were obscuring the mountain pass I needed to go through. I turned around to spend the night with my family.

Upon landing, however, my father-in-law said I would be able to remain below clouds if I followed the Salmon River until it emptied into the Snake River. I could then follow the Snake River toward Boise, where I would be out of mountainous terrain with better weather. If I remained over the river, I could stay below the clouds with good visibility and plenty of separation from terrain. He had flown that area many times, and I respected his opinion. I decided to give it a try, since I needed to get back to work and school.

After my second takeoff, everything was going fine. Things were exactly as he had predicted. I had good visibility and felt very safe with my height above the terrain. Unfortunately, my sectional chart ended not too far northwest of Slate Creek. I had originally planned to return the way I had come and hadn’t purchased any additional charts. The closest chart source was 75 miles away. Without a sectional chart, I had to trust that the river would take me where I wanted to go.

When I arrived at the point where the Salmon River empties into the Snake River, I initially turned upriver, which would have taken me to Boise. I began to look closely at the river and saw that the water was running the opposite direction I thought it should. Going against my initial thinking, I turned the airplane around and followed the Snake River the wrong way. I kept telling myself (incorrectly), “I know the Snake River winds every which direction, but it will ultimately take me where I want to go.” I kept looking for a point on the sectional chart that I could identify along the route.

I started tuning various frequencies and attempted to make contact with airports that I thought I was getting close to. There was no response. The thought to use 121.5 MHz never entered my mind. I had flown approximately five hours since topping off the tanks with fuel. I remember my flight instructor had taught me to not rely solely on the indications of the fuel gauges, both of which were showing empty with only an occasional flicker. I didn’t have a lot of time left before fuel starvation would result.

I began to feel anxious and struggled to keep a clear head. I began looking for any available airport or emergency landing location. The marginal weather meant that I had to find something in the canyon alongside the river—but I saw nothing.

Just when I thought I wasn’t going to find anything, the river entered a wide valley. I spotted a larger city and thought, There has to be a runway here somewhere. As I quickly scanned for an airport I found one within a few miles of my position. I lined up with the first runway I saw and started an approach to land. Out of the corner of my eye, I saw a flash of light. I looked to my left, and from the control tower I saw a steady green light shining at me.

I had no idea where I was. All I knew was that I had landed safely. I taxied up to the nearest access gate and secured the airplane. Nearly all the cars parked in the airport terminal area had Washington state license plates. I stopped the first person I met coming out of the terminal. I asked him, “I know this might sound weird, but where am I?”

I thanked him and walked into the airport terminal. I had no idea where Tri-Cities, Washington, was. A security guard gave me the phone number for the control tower. I called the tower and let them know I was the one that had just landed using the light signals. They were very friendly. Fortunately I hadn’t caused any issues with the flow of traffic to or from the airport. They gave me the ground frequency and directed me to the GA side of the airport. Once there, I was able to purchase fuel and the necessary charts, and plan my return flight home. Everything went smoothly from that point.

I made a poor decision to attempt a flight into unfamiliar terrain, with marginal weather, and without a chart to follow. Knowing what I know now, I never would have taken off. We can’t compromise safety with poor decisions and excessive risks. Since this experience I have become a certificated flight instructor and have had many opportunities to help others learn from my mistakes.