Get the app Get the app
News & Media Pilots: 'Flight of Passage' author

His life is an open book 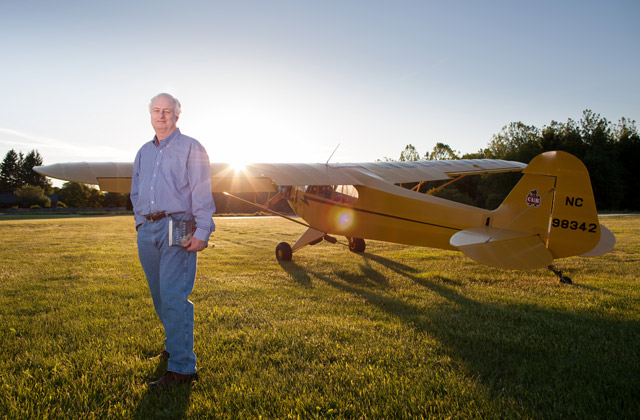 Rinker Buck’s personal aviation history is literally an open book: He wrote Flight of Passage, his 1997 memoir that recounted how he and his brother flew from New Jersey to California in a refurbished Piper Cub in 1966. The brothers, Kernahan and Rinker, were 17 and 15 and the youngest pilots to make such a trip. They flew without a radio, using pilotage and dead reckoning.

It’s also an entertaining history of their family—Buck is one of nine children—as well as of their father. Thomas Francis Buck was a media-savvy magazine publisher who, even as he encouraged his sons to make the incredible journey, lined up press appearances at several of their fuel stops.

He also passed down his love of flying. “It’s not inaccurate to say that 30 percent of people who are flying today originated in flying families,” Buck said. “[Kernahan] was a much more natural pilot than I was,” he added. “He was absolutely fearless in the airplane; turbulence didn’t bother him. I was a great navigator. I was more cautious. I found navigation and the challenge of navigation really, really fun.”

Reflecting on the trip, Buck said he’s still amazed that the brothers navigated as well as they did. “We never saw a major city. Everything we crossed was a river, a small town.”

Buck thinks Flight of Passage should be on every student pilot’s reading list. He recounts some of the specific lessons that the brothers experienced: landing too fast at a high-density-altitude airport; being battered by mountain turbulence; and feeling external pressure to be at certain places at certain times.

Flight of Passage was marketed as a male-oriented “buddy” book, said Buck, who has been a reporter for New York, Life, the Hartford Courant, and Adweek, among other publications. “I just sort of accepted that because it was my first book and I didn’t know what book marketing was about. I got huge numbers of letters and, later, emails from women who said, ‘Your screwed-up relationship is the same thing I lived through with my sister.’ A good book, if you do it right, goes beyond gender and it even goes beyond aviation.”

The biggest surprise from Flight of Passage’s publication was the response from readers who were so inspired by the story that they wanted to learn to fly. Some pilot readers made the coast-to-coast trip themselves. “I have heard from at least 35 or 40 people who have taken a coast-to-coast trip after the book came out,” Buck said. “It never occurred to me that people read books for inspiration, and get motivated and do the same thing.”

Flight of Passage still sells well—it’s now available in digital format via Amazon. Buck also wrote If We Had Wings: The Enduring Dream of Flight; First Job: A Memoir of Growing Up at Work; Shane Comes Home; and The Oregon Trail: A New American Journey. The last, published in 2015, details another kind of road trip with his younger brother Nicholas. The two traveled in a covered wagon with a team of mules, covering 2,000 miles and six states to follow the Oregon Trail. The New York Times called it an account of a “shaggy pilgrimage,” full of “transcendent moments and near disasters.”

Who | Rinker Buck, writer and journalist
Hours | Around 1,000
Favorite aircraft | Maule, Cessna 182
Extra | Researching the airports mentioned in Flight of Passage, Buck retraced much of the original route in a Cessna 182. Most of the airports visited in 1966 are still there and “look exactly the same.”