Get the app Get the app
Already a member? Please login below for an enhanced experience. Not a member? Join today
News & Media Quick Look: Pilatus PC–12

The Pilatus is ruggedly built and is just as at home on a grass runway as it would be on the ramp at the busiest airline hub. 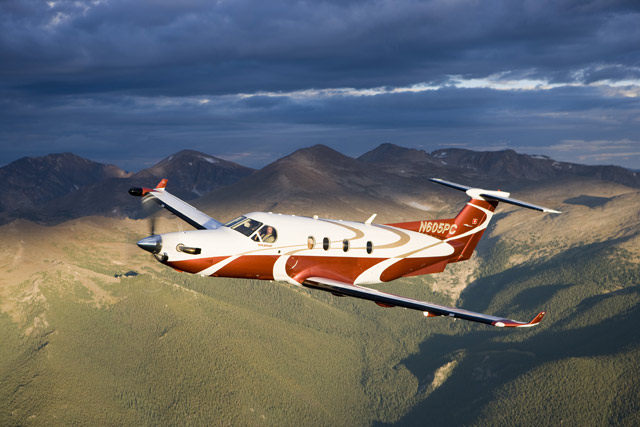 Twenty years ago, a not so widely known Swiss manufacturer burst upon the scene with a turboprop single that specifically targeted the Beechcraft King Air 200, which had been the 800-pound gorilla of the turboprop market. Pilatus’ PC–12 offered a similar-size cabin with a more fuel efficient and simple-to-fly option to the traditional twins. At the time, single-engine turboprops couldn’t be used in Part 135 charter operations, making the PC–12 a huge gamble for Pilatus. Was the gamble worth it?

A resounding “yes” would be the answer. Part 135 operations with single-engine turbines later were approved and PC–12s have been a sales success. The PC–12 offers speed within 20 knots of the King Air 200 while burning about 450 pounds per hour of Jet-A, which is about 300 pounds per hour less than the mighty 200. And unlike the Beechcraft, the PC–12 features a massive rear door that can swallow cargo as large as an ATV or personal watercraft.

The Pilatus is ruggedly built and is just as at home on a grass runway as it would be on the ramp at the busiest airline hub. In fact, the PC–12’s 67-knot stall speed means it can utilize most runways that light trainers use. Just make sure the airport can accommodate its 53-foot wingspan.

On the nose of early PC–12s is a Pratt & Whitney PT6A-67B that is flat rated to 1,200 shaft horsepower. With all the power in one engine, there are none of the complex handling characteristics of engine-out operations that make the traditional twins a bear to handle when an engine fails. But naturally, just like a light single-engine trainer, if that engine quits you’re flying a glider. If it happens at high altitude, however the PC–12 can glide as many as 80 nm in a no-wind situation.

Up front, the PC–12 has a logical cockpit layout with color-coded circuit breakers to delineate the many systems. Early PC–12 avionics are Bendix-King ED462 EADI and EHSI screens backed up with a Bendix-King KLN 90B GPS navigator (remember those?). A Bendix-King RDR 82VP radar was also available. Master warning and caution lights warn of system malfunctions, just like in modern jets.

PC–12s have heavy controls. Ailerons were modified in 2006 with servo tabs to lighten the loads on the pilot flying. Large, effective flaps make 80-knot approaches possible and a beefy trailing-link landing gear allow for smooth landings.

While the PT6 engine failure rate is statistically low, there is always a chance of failure and there are those owners for whom nothing less than two engines will do. For the rest, the PC–12 fits the bill quite nicely.