Get the app Get the app
AOPA will be closed July 4th, in observance of the Independence Day holiday. We will reopen at 8:30 am ET on Tuesday, July 5.
News & Media IFR Fix: Precisely flown nonprecision 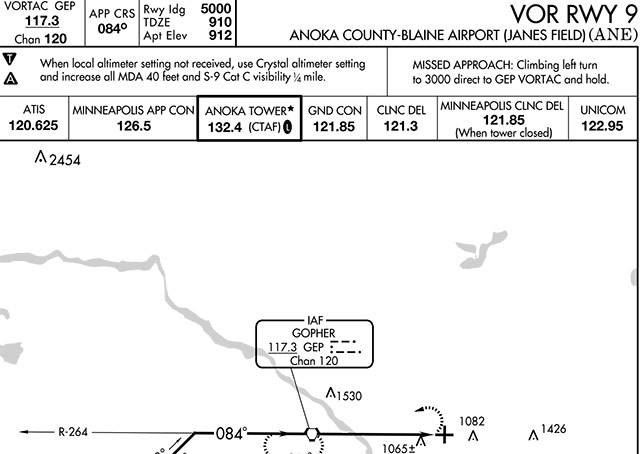 It’s a 6.5-nautical mile leg from the final approach fix at the Gopher VOR to the missed approach point on the VOR RWY 9 approach to the Anoka County-Blaine Airport in Minneapolis, Minnesota. With a groundspeed of 90 knots, you cover the distance in four minutes and 20 seconds, while losing 1,620 feet of altitude.

Not an uncomfortable scenario for descending to the minimum descent altitude—assuming an accurate groundspeed estimate—and using an approximate 400-foot-per-minute descent rate that would satisfy instrument-rating practical test language requiring the pilot to establish "a stabilized approach profile with a rate of descent and track that will ensure arrival at the MDA prior to reaching the MAP."

Proficiency demands a second calculation, however: Don’t overlook the 5.1-nm leg from Gopher to the visual descent point (VDP) published for the approach. (To review, the VDP is "a defined point on the final approach course of a nonprecision straight-in approach procedure from which normal descent from the MDA to the runway touchdown point may be commenced, provided the runway environment is clearly visible to the pilot.")

At the stated groundspeed, the pilot would have three minutes, 24 seconds to make the MDA—still quite manageable at about 500 feet per minute, but less leisurely than the previous calculation.

Then be sure to level off smartly at the MDA, recognizing that distraction or imprecision could place you perilously close to the ground, just 470 feet below the MDA in the vicinity of the airport.

Now it turns out the groundspeed estimate on which this all hinges was way too slow, and it won’t be possible to reach minimums before the MAP on this low-weather day. So while still flying between Gopher and the VDP, you decide to miss the approach and try again.

Will you perform the miss—it’s a climbing left turn to 3,000 feet, direct Gopher—from your present position? That’s uncomfortably close to the VOR for a successful climbing, turning return to the navaid for entry to a hold.

Here is the general, simplifying guidance from the Instrument Flying Handbook that may have slipped from your memory since the checkride: "The pilot may execute the MAP early, but pilots should, unless otherwise cleared by ATC, fly the IAP as specified on the approach plate to the MAP at or above the MDA or DA/DH before executing a turning maneuver."

Dan Namowitz has been writing for AOPA in a variety of capacities since 1991. He has been a flight instructor since 1990 and is a 35-year AOPA member.
Go to Dan Namowitz's Profile
Topics: IFR, IFR, Technique