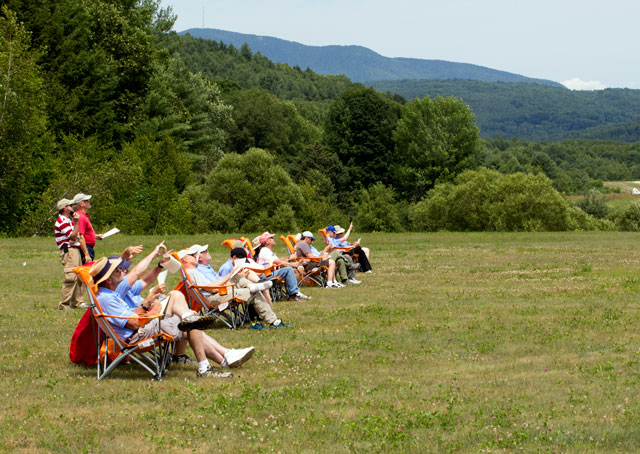 Heads tilted skyward, judges watch each contest flight closely, seeking the subtle imperfections in each maneuver, while their assistants announce each line, loop, and roll in turn and scribes record the damage done to every potential perfect score. At the Kathy Jaffe Challenge in Lumberton, New Jersey, this contest pilot didn’t just struggle in the sky: Deciphering and vocalizing the complex routines of pilots flying in the Advanced category required a bit more mental dexterity than I could muster at times, though Wes Liu, the judge (and a fellow competitor) I was assisting was kind while urging me to stay ahead of the sequence. Between groups, he opened his laptop and let me preview an online course he’s developing for the International Aerobatic Club on just this topic.

As soon as each flight finished and the final scores written, the papers were whisked away to the chief judge’s table for another report, then inside the FBO building where another volunteer waited at the computer to digitize the results and transmit them to IAC for worldwide distribution. The good, the bad, and the ugly results (like mine) become part of a permanent record housed in easy reach of anyone curious how a particular pilot performed. What joy!

The organization that makes all of that happen starts long before each contest begins, and depends on the teamwork of pilots and many nonflying volunteers who devote hours of effort (and travel) to support regional competitions around the country. Spouses and significant others cover many of the jobs, along with pilots who no longer compete but devote their time to making it possible for others.

“I love the people who fly aerobatics, I love the airplanes, I love the whole contest situation,” said Miriam Levin, a former competition pilot who has for nearly two decades since volunteered her expertise in organization, contest operation, and judging at contests around the Northeast. “It’s really neat how the guys will help each other.”

There are many different jobs to be done at each contest, and Levin has handled all of them at one time or another, and sometimes, at smaller events, all at once. “I find it very fulfilling,” she said. In recent years, Levin has been teaching Terri Nathanson (whose husband, Marc, is a competition pilot and instructor) the fine points of the logistics and the sequence of events on the ground that make the aerial sequences possible. 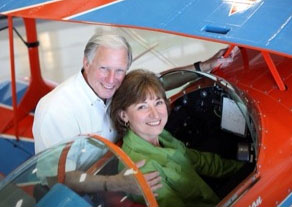 “Flying, instructing, and participating is a passion for my husband,” Nathanson said. “I think any time that we can share activities like that it sure makes things a lot more fun.”

Though Nathanson does not fly herself, she said the camaraderie extends to all who participate.

“We have a good time, as you know,” Nathanson said. “It’s very nice to be a part of that community rather than stay at home.”

Nathanson and fellow volunteers start working a week before the contest, printing, collating and filing dozens of pages per pilot, including registration and technical inspection forms, score sheets, and many copies of the sequences to be flown, depicted on pages known as “flimsies” in the pictographic language of aerobatics developed by José Luis Aresti Aguirre that is standard throughout international competition. As many as five judging stations will need three pages per pilot per flight, and another set for the chief judge. With contests drawing three dozen pilots or more who make up to three flights each, it adds up to a lot of paper.

“Staying organized and having a good printer helps,” Nathanson said.

Among the judges who scored my aerobatic Waterloo over South Jersey Regional Airport (a flight with four figures flown in the wrong direction) was Rick Runnels, an accomplished competition pilot in the 1980s who recently returned to the aerobatic world to lend his expertise as a judge. Runnels is a highly prized volunteer with the expertise to grade and no plans to fly himself, leaving him free to judge any and all categories. Runnels said he returned to the sport to pay it forward.

“There’s been a lot of people who don’t fly who come and become judges, and volunteer in various other capacities,” Runnels said. “That’s another reason why I got re-involved. I enjoy helping other people, especially in a sport that I love … (judging is) kind of an adrenaline rush.” 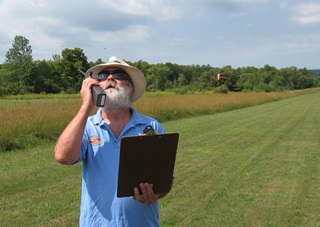 Runnels, who operates an upstate New York bed and breakfast with his wife, Lorrie, said returning to the judges’ line has given him a vicarious flash of nostalgia.

“I know what they’re going through,” Runnels said, though he was unable resist adding that “I have never ever, ever flown a maneuver backwards.” (Ahem. He did soon thereafter admit that this was not, in fact, the case.)

Levin takes special care when first-time pilots arrive at a contest, making sure to introduce them to the contest director (often, though not always, a participating pilot), chief judge, and an experienced competitor who can show the new pilot the ropes, particularly when it comes to where to be and when.

She also will put them to work (along with anyone else available who has the requisite skills and experience for a given job). Many positions on the judging line require in-depth knowledge of Aresti, IAC rules and contest procedures, though not all. Levin can get someone ready to act as a recorder in about 10 minutes, she said. Runners need do nothing but run (or walk, or drive) between the judges’ line and the scoring room, where the finished forms are handed off to other volunteers. By the time a contestant lands, the bad news (or good, as the case may be) is often waiting for them, a stack of score sheets neatly clipped together. (What joy!)

Even with every pilot pitching in, except during the flights of his or her category, important jobs often go unfilled, requiring volunteers like Levin to wear multiple hats (as she has done more than once in countless contests since the late 1990s). She noted that it requires around two dozen people to staff a single contest flight, and nonflying participants are absolutely essential to filling those ranks.

“I think that’s an important perspective,” Levin said. “It wouldn’t be much of a sport if we never had a contest.”

IAC maintains an online list of contests around the country and welcomes pilots and enthusiasts willing to join the ranks of volunteers. Contact information for each contest director is included in the listings, and you can rest assured of a warm welcome—and the gratitude of all participants. And usually a free lunch.