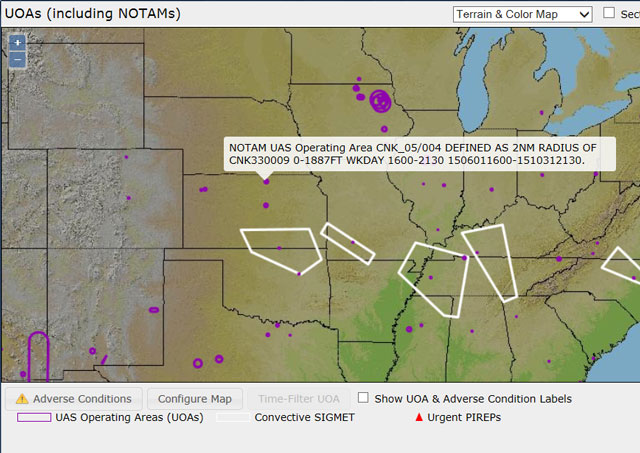 The first components of a comprehensive unmanned aircraft traffic management system have been deployed, giving pilots who receive briefings online graphic representations of authorized unmanned aircraft operating areas, time-coded to depict if a given unmanned operating area will be active at the estimated time the planned flight will be in the vicinity. The new tool presents information long available in notams filed by commercial unmanned aircraft operators in a more easily understood format, focusing attention on unmanned operations with potential to affect a planned flight based on location and altitude.

The new feature is part of Lockheed’s Next Generation Briefings, an enhancement of Lockheed's online flight planning tool that presents information about weather and notams in both graphic and text form. The idea, company officials said, is to enhance safety and situational awareness by making the information more easily understood, converting TAFs, METARs, weather advisories, and now, unmanned flight plans from text to graphics displayed on a single image. 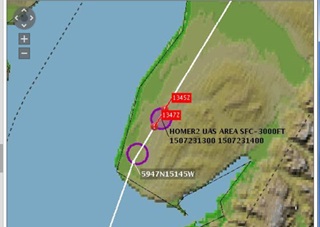 The dramatic increase in approved UAS operations in the National Airspace System is already adding to the long list of notams pilots must sort through in a typical briefing, and as the number of unmanned operations within the system increases, the method of documenting unmanned operations may also change. Mike Glasgow, fellow and aviation services chief architect at Lockheed Martin Transportation Solutions, said a new system has been developed that could replace the existing notam system for reporting unmanned flights with something more analogous to traditional aircraft flight plans, which could be submitted directly through unmanned aircraft ground stations and distributed to pilots and others who need to know. Currently, unmanned operators phone in the details of their planned operations to a briefer, who types the information and submits it into the notam system.

“Having to do a phone call is not good … it is not going to scale up,” Glasgow said in a telephone interview. “There are concerns with eventually overwhelming the notam system with the volume” of unmanned flights.

UAS Operating Areas, or UOAs, could eventually replace notams, though for now the information will continue to be distributed through the notam system. Operators will submit a unique (unmanned) aircraft identifier, operating times and altitudes, and the shape (geographic limits) of the operating area online, and eventually be able to do so through their ground station. Glasgow said unmanned operators may gain the ability to file notams in addition to UOAs in the near future.

“That is sitting in the lab” awaiting completion of an FAA safety review, he said. Once deployed, users will be able to click a button to simultaneously submit a notam with their UOA “as long as that’s required."

Glasgow said the UOA system is designed to integrate with third-party flight planning providers. UOAs also would be able to trigger the adverse condition alerting service that transmits alerts to pilots via texts, emails, or satellite communications when weather or other adverse conditions develop after a briefing is complete but before or during the actual flight.

Allowing unmanned flight plans to be filed directly from ground stations is a feature that is expected to enhance compliance with required reporting.

“The desire is to make it very easy for people to file,” Glasgow said. “Even in the case of hobbyists, for example.”

Lockheed is collaborating with the FAA and various stakeholders including NASA on the UAS Traffic Management system that will eventually support beyond-line-of-sight operations. The federally funded effort will deploy standards-based software platforms and other tools allowing ground stations to interact directly with a centralized system that will monitor individual flights to ensure they remain within their designated operating areas, and alert air traffic controllers if there are deviations. Ground-based detect- and-avoid technology is also under development. 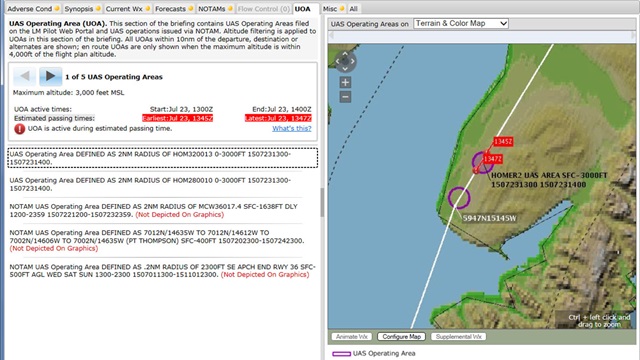