Get the app Get the app
News & Media Energy management

Whether he realized it or not, the first time Orville eased aft on the yoke of the Wright Flyer and took to the air, he became a pilot—and an energy manager. Managing energy in the form of altitude and airspeed is a fundamental skill required of anyone who flies an airplane. Without it, a pilot is less capable of maneuvering an airplane safely, but more capable of bending one accidentally. 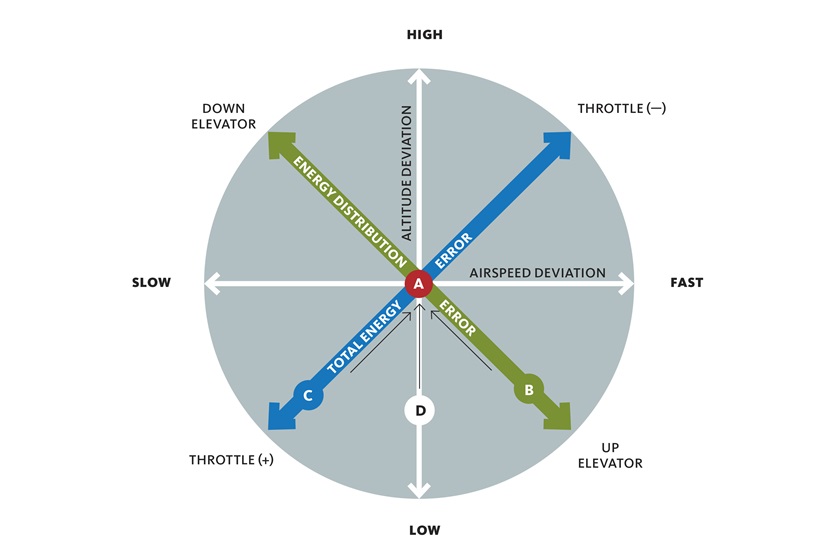 An energy management approach can help new pilots understand how the controls work. Unfortunately, energy principles of motion control have not found their way into flight education. To bridge the gap, here are four simple rules of energy management.

But there is more. Altitude and speed are not only inseparable—they are also interchangeable. You can increase one at the expense of the other without changing the airplane’s total mechanical energy. Given the energy coupling between altitude and speed, it’s no wonder that any attempt to change one independently of the other by using a single control always fails.

Rule 2: Energy is like money—you earn it, spend it, and save it. Use wisely!
In our money analogy, an airplane has two “savings accounts" for storing energy. One is labeled “altitude” and the other “airspeed.” The combined amount of energy saved in both accounts represents total mechanical energy. Once airborne, the airplane earns energy from engine thrust (T) and spends energy on aerodynamic drag (D). The difference between energy earned and spent determines whether total mechanical energy increases, decreases, or remains the same.

When energy gained exceeds that spent, a net flow of energy into the airplane increases its total energy. Since energy income exceeds that needed to pay for drag, you can redistribute that surplus and save it as additional altitude or speed. When energy gained is less than energy spent, a net flow of energy out of the airplane decreases its total energy. Here, the airplane does not have enough energy income to pay for drag, but that’s OK—you can dip into the savings accounts. It’s your choice whether you descend or slow down as you transfer energy out of the savings accounts to help pay for drag. Finally, when energy gained matches energy spent, there is no net gain or loss—all thrust is spent on drag, as the airplane maintains constant altitude and airspeed.

Because energy cannot be created or destroyed, a change in total energy resulting from the difference between thrust and drag always matches the change in energy redistributed over altitude and airspeed.

Rule 3: Use the throttle to control total energy and the elevator to control the distribution of energy between altitude and airspeed.
The throttle, by increasing or decreasing thrust, regulates the rate of change of total mechanical energy. The latter is a function of both thrust (energy gain) and drag (energy loss); however, drag varies mainly because of long-term changes in airspeed or deployment of high lift/drag devices that can only increase drag. Therefore, changes in total energy—demanded by new or corrective maneuvers—normally are initiated by changing thrust, not drag. In the long term, thrust can be retrimmed to compensate for changes in drag.

What about the elevator? It’s an energy exchanger, used for trading altitude for airspeed and vice versa. Thus the elevator, which per se does not contribute to energy gain or loss, is an energy distribution device whose primary job is to correctly allocate changes in total energy between altitude and speed.

Rule 4: When managing your airplane’s energy your goal is to detect, correct, and prevent altitude and airspeed deviations.
Energy management is about making desired changes in vertical flight path and airspeed—when initiating a new maneuver (e.g., leveling off from a climb) or correcting deviations from the desired path/speed. Since most in-flight “energy crises” start as undetected or ignored path/speed deviations, it is important to recognize, correct, and prevent such deviations.

Suppose you have slipped below the glidepath on final. Do you pull up, add power, or both? It depends. You know you are low, but you’ve got to check your airspeed as well. Relative to the target airspeed, your actual speed may be faster, slower, or on target. In all three cases your job is to bring your airplane back to its correct energy state (“A” in the diagram).

Low and fast (B) is fundamentally different from low and slow (C). The former calls for pulling back on the yoke to null the energy distribution error, while the latter calls for adding power to increase total energy.

However, adding power to increase energy only works if excess thrust is available. What if you mismanage your airplane’s energy and slow down to a stall—where induced drag is so high that applying full power would give you no surplus energy? Your only recourse is to first trade altitude for speed by pushing forward on the yoke, reducing angle of attack and induced drag, and then add power to regain energy.

That is why a low-altitude stall is so dangerous: Your airplane has lost almost all its stored mechanical energy and lacks the excess thrust needed to replenish it. Clearly, total energy errors demand prompt correction and awareness of your airplane’s capability to gain (or lose) energy within its entire altitude-speed envelope.

Now look at D in the diagram. You are lower than desired but at the correct speed. Here, you actually have a combination of total energy and distribution errors. Regaining altitude without changing speed calls for adding power while easing aft on the yoke. In other words, decoupling altitude and speed (i.e., changing one without changing the other) requires simultaneous use of both controls.

In all cases, watch your altitude/path and airspeed carefully as you correct them, adjusting pitch and power as appropriate. Once deviations are corrected, trim the airplane and continue to monitor its energy state to prevent any further deviations.

The bottom line? As a pilot, you are an energy manager. Understanding energy management will help you master the coordination of the throttle and elevator for safe and effective control of altitude and airspeed. Following the above four rules will give you a head start.

For an in-depth story on energy management, check out the Journal of Aviation Technology and Engineering.