Get the app Get the app
Already a member? Please login below for an enhanced experience. Not a member? Join today
News & Media Cropduster fights Luftwaffe

The time is 1945, the war in Europe is over. A tiny town in Texas is looking forward to welcoming back its heroes. Instead, visitors of a different kind descend on Morton. 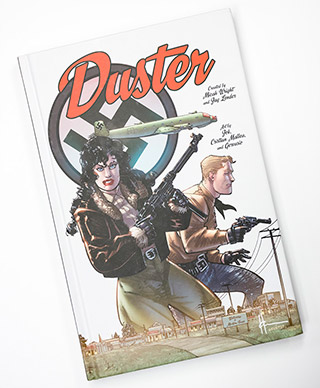 “Nazis! In America!!” gasps crop duster pilot Joanna Baker, when she encounters them in her Stearman Kaydet mid-air, their aircraft conveniently marked with a swastika.

Micah Wright’s and Jay Lender’s Duster was originally conceived as a movie, but with careers in comics, animation, and video games, the authors settled on publishing it as a graphic novel instead. Several years and a Kickstarter campaign later, Duster was introduced in 2015. The female lead is feisty Joanna Baker, a single parent and passionate pilot, proud of her independence and with the heart of a lion. She’s also a dream come true. Literally. In their foreword the authors describe the conception of their creation: “One night Micah dreamt of a female pilot who shoots down a German plane over her Texas farm. After landing she spots a Nazi crawling away, and (…) it’s Hitler.”

Hitler didn’t make it into the book after all, but that doesn’t mean there’s a shortage of villains or heroes. Besides the valiant Joanna, there’s Morton’s sheriff, who harbors a dark secret about his time in the war. In a modern twist for the era, Joanna’s father takes care of household duties. The local pretty-boy is a draft dodger. One of the Germans can’t abide the war. In short, characters are not black or white, which makes the story excitingly unpredictable.

In spite of its lighthearted tone and humorous asides—Germans follow scheduled bathroom breaks and their pilot has an attitude—this book is not for the faint-hearted. But then graphic novels rarely are. The Nazis are suitably cruel, some Americans collaborate, people die, and aircraft crash. The important thing is that at the end of the day Joanna Baker, pilot, is a welcome addition to the universe of comic-book characters.