Get the app Get the app
AOPA Members DO more LEARN more SAVE more - Get MORE out of being a pilot - CLICK HERE
News & Media Eighteen rotors, pilot optional 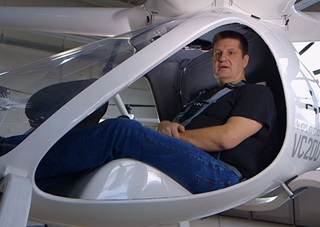 ot every chief executive of an aircraft company would take personal control of a prototype test flight, but Alex Zosel was making a point.

Zosel, CEO of the German firm e-volo GmbH, grabbed the joystick to demonstrate how easy it is to fly the 18-rotor craft he conceived in 2011, inspired by the advent of small, unmanned aircraft that are now ubiquitous. Unlike traditional (or miniature radio-controlled) helicopters, these multirotor machines are controlled solely by varying the speed of each electric motor independently, with a digital flight controller at the heart of the system that can detect motion and translate pilot inputs to smooth motion in the desired direction. The computer can compensate for the loss of more than one motor simultaneously, and allows the pilot to stop flying at any moment.

“You can feel free to let go of the joystick when you wish to gaze at something in wonderment, the Volocopter retains your altitude and position,” the company website reports, cheerfully dispensing with the challenges associated with piloting helicopters as if they were already in the past.

Zosel was not personally along for the ride when he took command of the pre-production prototype during a series of test flights in November, the company noted in a press release. The flight, documented in a YouTube video shown above, was made with both seats of the Volocopter VC200 filled with ballast, simulating the weight of the absent pilot.

Zosel climbs aboard, though he does not fly, in another video explaining the origin of his creation.

“So we saw small toys for kids to play with,” Zosel said, recalling the quadcopters that caught his eye a few years ago. “So we are thinking about why not scale it up to an aircraft, and that was the beginning of the idea.”

Zosel said the current prototype is built for testing, though it is finished “like a luxury car. It’s not only a technical prototype, it’s really, really nice.”

The test program is underway and the next prototype the company assembles will be the production prototype, Zosel said. The company is developing concepts for versions with zero to four seats, including heavy-lift unmanned aircraft and four-seat “commercial” versions. The unmanned versions are rendered in digital animation in another company video, shown spraying crops.

The Volocopter two-seat prototype first flew in 2013. Battery technology has advanced since, but not yet enough to significantly add to the 20 minutes of flight time possible on battery power alone. The company is working on a hybrid power system that would augment the battery array with a combustion engine generator to extend range, adding a bit to the carbon footprint of an aircraft that starts with a very small one (or none, if the batteries are charged with electricity produced from carbon-free sources).

The design comes with several safety features, including e-volo’s version of an “easy” button that causes the computer to bring the aircraft to a controlled, stable hover, after which it slowly descends to land. (The company uses the phrase “slowly glides to the ground” to describe this maneuver, though that is almost certainly a translation of the word “glide” that is not precisely what they mean in English.)

If all else fails, it also has a parachute.

Ease of operation is highlighted throughout the sales pitch: The Volocopter’s “handling is child’s play,” the company (and Zosel himself) reports.

The first manned flights will be made “as soon as all requirements of the responsible aviation authorities are fulfilled,” the company reports. 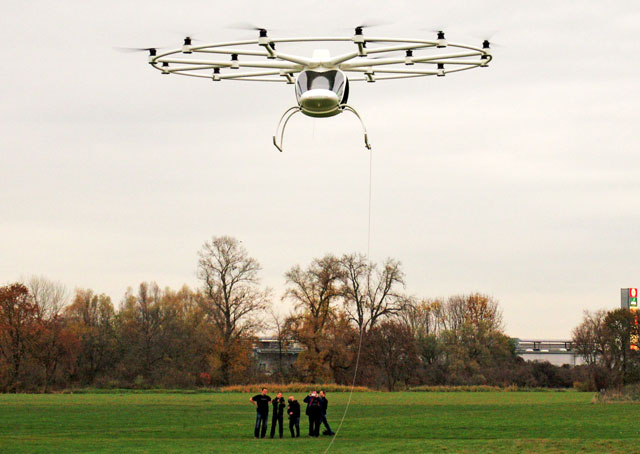