Get the app Get the app
AOPA will be closed July 4th, in observance of the Independence Day holiday. We will reopen at 8:30 am ET on Tuesday, July 5.
News & Media Training Tip: Weather in transition 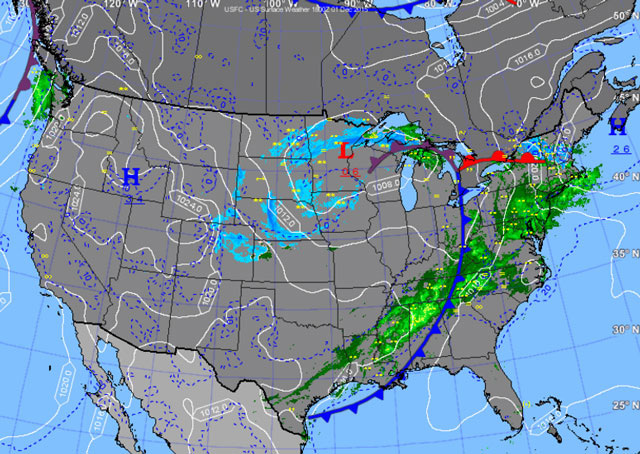 That's a serene weather picture. But if a pilot made the mistake of launching for a prolonged VFR flight based only on this information, a rude surprise would await, because conditions will soon deteriorate.

A more thorough weather briefing, commenced with a check of the current surface analysis chart, would raise the alarm. That chart depicts high pressure east of New England and a low pressure area west of the Great Lakes, with a warm front extending east, a cold front curving south, and in between, the extensive zone of bad weather typical of such systems.

Even a careful look at the station METAR summarized above would raise skepticism in a weather-wise pilot, because the southerly wind and three cloud levels, reported as “FEW120 SCT180 BKN250,” suggest that the weather is in a state of transition.

At an airport 100 miles to the southwest, the warm front is already knocking at the door. There, the visibility and barometric pressure are similar, but already light rain is falling, the multiple broken cloud decks are much lower, and there is a 9,000-foot overcast. By 11 p.m., instrument conditions will prevail there, according to this TAF excerpt: “FM020400 VRB02KT 2SM -DZ BR OVC005.”

None of this would come as a surprise to a wary pilot.

“Generally, prior to the passage of a warm front, cirriform or stratiform clouds, along with fog, can be expected to form along the frontal boundary,” notes the discussion of warm fronts in the Pilot’s Handbook of Aeronautical Knowledge. (See page 11-19.) “Light to moderate precipitation is probable, usually in the form of rain, sleet, snow, or drizzle,” it adds, describing conditions that match well with both stations’ near-term forecasts.