Get the app Get the app
AOPA will be closed July 4th, in observance of the Independence Day holiday. We will reopen at 8:30 am ET on Tuesday, July 5.
News & Media Pilot Briefing: Fly-Ins

A reason to fly 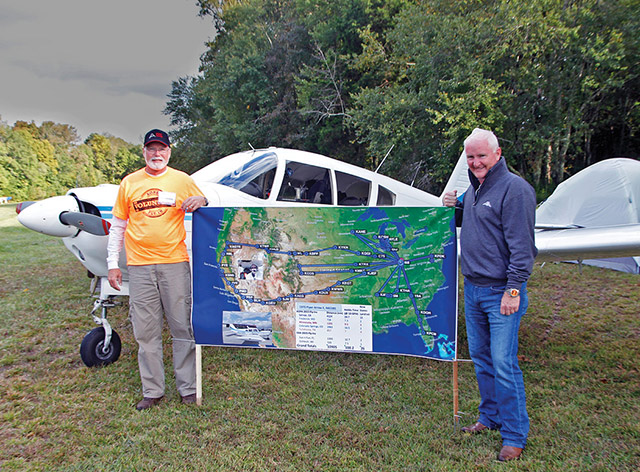 Ed Loxterkamp had a lot of explaining to do in 2015. The Ohio pilot needed to explain to his wife why flying to every AOPA regional fly-in was so important. He told her: “Mark Baker made me do it.”

In his 1970 Piper Arrow II, Loxterkamp flew 10,905 nautical miles, put 100.2 hours on the Hobbs meter, and flew in 26 states to attend every AOPA Fly-In in 2015. Meeting the association’s fifth president at the final fly-in, in Tullahoma, Tennessee, he told Baker, “It’s your fault!” He said, “As soon as I heard Mark mention the change to regional fly-ins I was already planning to go to one—it was a reason to fly.” In 2014 he attended the Indianapolis; Frederick, Maryland; and St. Simons, Georgia fly-ins.

Loxterkamp not only flew to each of the five 2015 fly-ins but also volunteered. He created a map of his travels that he displayed on his Arrow at each fly-in. “When I saw the locations for 2015, I realized most were close enough and since I have fond memories of Colorado Springs from my Air Force days, I had to do that one,” he said. “Salinas was the only one that didn’t initially have an obvious reason for me, but it was a perfect reason to take my Arrow coast to coast, cross the Rockies, and see parts of the U.S. in a way that most people never see.” It was the longest flight, and it took him four days. He covered 4,124 nm, landed in 15 states, used about 400 gallons of 100 LL, and put 39.7 hours on the Hobbs. “That was the best trip for the sheer variety of experiences,” he said.

Loxterkamp plans to fly to AOPA Fly-Ins in 2016. He’ll just need to explain to his wife why he needs to go to Beaufort, North Carolina (MRH) May 21; Bremerton, Washington (PWT) August 20; Battle Creek, Michigan (BTL) September 17; and Prescott, Arizona (PRC) October 1. He won’t miss them if he can help it: “The fly-ins were more than I hoped for.”