Get the app Get the app
AOPA will be closing at 2:30pm ET Wednesday, November 23rd, and will remain closed Thursday and Friday in observance of the Thanksgiving holiday. We will reopen Monday November 28th at 8:30am ET.
AOPA Members DO more LEARN more SAVE more - Get MORE out of being a pilot - CLICK HERE
News & Media Pilot Briefing: Musings 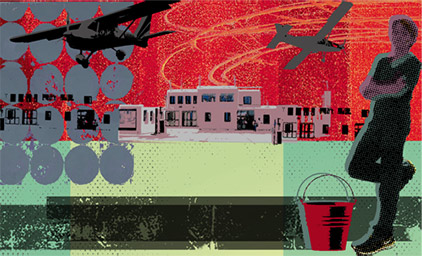 You know those kids who hang around the smaller, friendlier airports? Most people call them “ramp rats.” You seldom hear about those kids anymore, maybe because they’re an endangered species, locked away from general aviation behind a 12-foot-high chain-link fence topped with razor wire.

As opposed to “airport bums”—who wash down an FBO’s stale doughnuts with lukewarm coffee cut with store-brand powdered creamer and sit around critiquing landings—ramp rats are kids, sometimes too young to drive, who will wash airplanes, brush off snow and scrape off ice, wash windows, clean and vacuum the interior, wipe oil off the cowling and fuel off the wing, help push it or pull it or tie it down, sweep the hangar, mow the grass, knock down weeds, and generally perform any menial task asked for or even implied. They are adopted by pilots and the FBO—although pilots are more important, and pilots who own airplanes most important of all. And while they’ll work for cash, ramp rats do it largely for the possibility of a ride. Right seat is more important than backseat, and yoke time most important of all.

The original ramp rat dates back before there were airports or ramps, to New York City on the eve of the big 1909 Hudson-Fulton Celebration. A young Grover Loening snuck inside a makeshift hangar on Governors Island and stood there silently watching Wilbur Wright prepare his biplane. After three hours Wright finally looked at Loening, tossed him a rag, and told him to wipe up some oil under the wing. Loening kept showing up to perform odd jobs for Wright, and by the time the celebration ended Wright had turned almost gregarious. “[He] patiently answered all my questions and clarified discussions,” Loening wrote. Although he never flew with Wilbur, Loening corresponded with the brothers, designed an aeronautics master’s program at Columbia University and then graduated from it, and within a few years he ran the Wright Co. factory.

Being a ramp rat can lead to great things.

One-time ramp rat Joe Castanza was 15 when his father drove him to Essex County Airport in Caldwell, New Jersey, so he could talk to the airport manager about any open jobs. The manager told him to keep checking back, but on the way out the young man saw a hangar where an older man was inside fixing radios. Castanza was good with electronics, so he asked the guy if he had work. The man said he needed an assistant and offered to pay him under the table, so it was a deal.

When it turned cold, a customer brought in his Cessna 172, and after the job was finished Castanza helped him push it out on the ramp. A couple of weeks later it snowed, and he spotted the man brushing off the wing of his 172. “I was worried because here was this older guy up on the forward step, so I ran out to help him brush the snow off,” Castanza says. “He says, ‘You want to take a ride with me?’ and I said, ‘Let me go ask my boss.’ I had flown on airliners, and I had flown Microsoft [Flight] Simulator, but it was my first time flying. He took me up for a ride, and we hit it off.” His name was Lee Davenport, and he was a flight instructor. Castanza began ramp-ratting for Davenport. “I was 16 and I was learning to take off, land, and fly cross-country, and stalls and turns. He was a Korean War vet, and when he made a steep turn he made a steep turn—60 degrees.”

Although they eventually lost touch, Castanza’s fond memories are blended with basic aviation knowledge. “I would ask questions. I would say ‘Hey, what’s this do, what’s that for?’” Castanza is a physicist working in New Jersey.

Gary Meeker learned aeronautical engineering by washing airplanes. He started out as an Aviation Explorer at Stewart Air Force Base in New York, sponsored by the Metropolitan Transportation Authority. When another kid got tired of his under-the-table job washing airplanes, he asked Meeker if he wanted to take over.

“I bought a bucket, soap, and wax and by word of mouth I washed airplanes for a year and half,” he says. “I got a chance to look at the structure close up, along with trying to not ice up the static ports, but also the way it was designed from the aerodynamic standpoint.” Meeker retired from a career in the U.S. Air Force.

Samuel Perez was a 10-year-old model airplane fanatic when he struck up a conversation with the line guys at Idaho Falls Regional Airport and FBO owner Bob Hoff took a liking to him. “I’d bug my mom to take me there,” he says, and she’d drop him off and head to work. “Somebody would say ‘Hey, come help me with the airplane and we’ll go fly,” he says, “and that was what I did to get rides. I was a go-getter. I had more jobs here and there that paid me under the table. I detailed Bob’s Twin Beech to go with him to an airshow.”

Ramp-ratting taught him a lot about flying. “By watching airplanes land and take off, I learned to quickly identify make and model, which was really helpful in the cockpit. Listening to ATC radio transmissions between pilots and the tower, I learned basic procedure for departing and arrival communications,” he says. “When I volunteered to wash airplanes in exchange for a ride, I learned that washing a plane was a task that required attention to detail.”

Hoff told him about a local aviation maintenance program, and Perez graduated from there in 2012. Today he’s an employee at Pacific Fighters, an aircraft restoration shop, where he’s worked on such warbirds as a North American P–51B, a Messerschmitt Bf 109, a Hawker Sea Fury, and a Grumman TBM. “It’s pretty cool stuff and my boss is great,” he says. “The FBO allowed me to grow. It’s my emotional and financial aid. If I ever need to cheer up, I go out to the airport.”