Get the app Get the app
News & Media Pilot Briefing

In cold weather, you may not be where you think you are

In cold weather, you may not be where you think you are 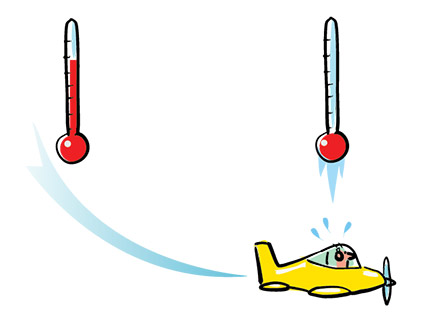 The FAA has released an updated list of airports where temperatures can fall so low in cold weather that your altimeter may deceive you.

When the recorded temperature at a listed airport drops to—or below—the published cold-temperature restriction, aircraft on approach may be flying lower than the altitude indicated on a barometric altimeter. Under those conditions, pilots “must make an altitude correction to the published ‘at’ or ‘at or above’ and ‘at or below’ altitudes as shown on the list. Instrument approach procedures for airports with a cold-temperature restriction are published with a snowflake symbol.

The updated list of cold-temperature-restricted airports is available online and includes examples of how pilots should make the necessary corrections—a procedure that became mandatory in 2015.

So how cold can it get at some of the nation’s airports? Alaska takes the chilly lead with some airports in the minus 45 degrees Fahrenheit level such as Ambler, Kobuk, Deadhorse (no wonder), and Fort Yukon. But it gets surprisingly cold at airports such as Steamboat Springs, Colorado (minus 24 degrees F); Ames Municipal, Iowa (minus 17 degrees F); Biddeford Municipal, Maine (minus 24 degrees F); Dodge Center, Minnesota (minus 44 degrees F); and Watertown, New York (minus 33 degrees F).

Rune Duke, AOPA director of government affairs for airspace and air traffic, recommends pilots become familiar with the altitude-adjustment process and check the temperature of the destination airport during flight planning, when the adjustment should be computed. “That is far easier and safer than trying to do it once airborne,” he said.

There were dozens of breakout sessions and learning opportunities. Previous conferences’ focus on primary training was largely absent this year. Hartzell Propeller President Joe Brown signaled the shift in his conference-opening comments. Brown has a passion for regular proficiency training, which he says can be accomplished in simulators both to increase quality and to decrease cost. Brown and other industry partners ran a successful pilot proficiency center at EAA AirVenture 2015, and he said the extensive scenario-based training that occurred can be emulated at flight schools around the country.

FAA Administrator Michael Huerta’s keynote remarks followed a similar theme. Although we are in a period of phenomenal air carrier safety, he said, general aviation safety continues to be an area waiting for improvement. The FAA plans to push that agenda in a number of ways, including with its Part 23 rewrite and a regulatory enforcement policy that seeks to provide pilots with training rather than punish them after a regulation bust.

It’s clear this is a year of transition for Redbird. As the company shifts focus away from the flight school, it’s directing its attention to collecting flight training data on a broader scale. On the ground, this will happen with its new operating platform called Redbird Navigator. Navigator is a single point of interaction for operators, enabling what Redbird says will be more seamless customer support and easier training operation. Simulators with Navigator installed can be driven with a laptop, phone, or tablet. In the air, data collection will happen with the previously announced Sidekick. Combined, Sidekick and Navigator will be able to track everything from student performance in simulators to how long it takes students to solo in the aircraft. What ultimately will be done with the data isn’t yet known.

Cessna Aircraft officials have answered the question, “What’s next?” at the 2015 National Business Aviation Association convention in Las Vegas. The answer is a large business jet called Hemisphere that can fly 4,500 nautical miles. The clean-sheet design is scheduled to fly in four years, but first Cessna engineers are gathering customer input on the interior using an interactive cabin concept on display at the show in Las Vegas.

• GE Aviation gave another clue to the future at Cessna when it announced its 1,300-shaft-horsepower engine will power Cessna’s upcoming single-engine turboprop.

• Aerion, after many years of effort to build a supersonic business jet, is getting additional help from Airbus and is looking for a factory site.

• Wheels Up, the New York-based charter company using mostly King Airs and a few small Cessna jets, has partnered with a medical jet company for its customers.

• One Aviation CEO Alan Klapmeier said the next step in the Eclipse 550’s development is global expansion.

• Bombardier and NetJets celebrated the entry into service of the $32.35 million Challenger 650.

• Sandel has developed a complete avionics suite for the King Air 200 that sells for $175,000, including installation.

• Pilatus has smoothed the PC–12 NG’s airframe for speed and added a five-blade propeller for better takeoff and climb performance.

At AOPA’s request, aircraft purchase advisor Conklin & de Decker estimated the hourly operating costs for 45 jets at the recent NBAA convention. These are variable costs and include fuel, maintenance (parts and labor), engine reserves, auxiliary power units if applicable, and miscellaneous expenses to include crew travel, catering and cabin supplies, landing and parking fees—all boiled down to a single number. David Wyndham, president and co-owner of Conklin & de Decker, made the comparisons.

As a quick summary, the least expensive to operate is a Cirrus Vision SF50 jet at $661.53 per hour. The most expensive is a private airliner. The Airbus ACJ320 ultra-long-range, large-cabin business jet comes in at $7,964.69 per hour.

See the full list of hourly operating costs for the 45 jets online. 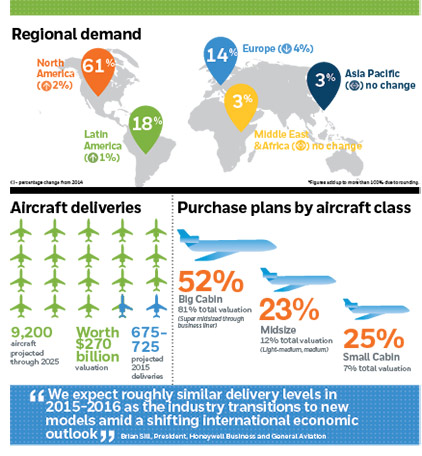 First flight of the Sikorsky R–4, an American two-place helicopter designed by Igor Sikorsky with a single, three-blade main rotor and powered by a radial engine. Originally the Vought-Sikorsky VS–300, Sikorsky modified the aircraft, which became the world’s first mass-produced helicopter. Of his invention, Sikorsky said:

“The helicopter is probably the most versatile instrument ever invented by man. It approaches closer than any other to fulfillment of mankind’s ancient dreams of the flying horse and the magic carpet.”