Get the app Get the app
News & Media P&E: Dogfight

The most useless certificate 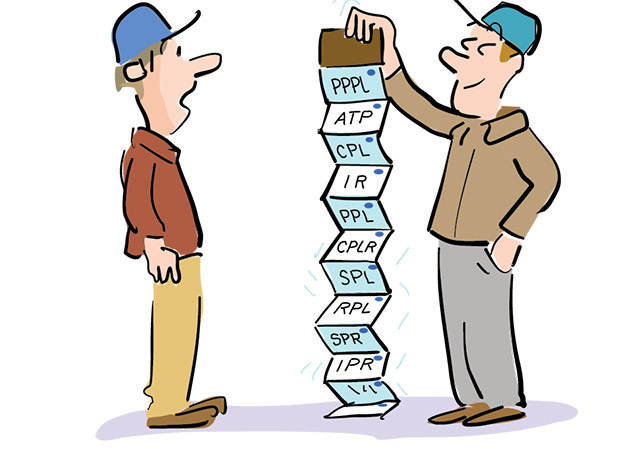 Of all the certificates and ratings a pilot can accumulate, which just doesn’t make sense? Contributor Chip Wright and Editor Ian J. Twombly debate which certificate isn’t worth its weight in plastic.

While the total number of FAA-certificated pilots has declined over the past decade, some classes of certificates have bucked the trend. Sport pilots grew from 134 in 2005, when the certificate was introduced, to 5,157 in 2014. The ranks of pilots certified to fly only rotorcraft swelled from 9,518 to 15,511 over the same period—an increase of 63 percent.

Nothing but a novelty

If the Wright brothers were alive today and had a modern, working model of the Flyer, they would probably need to get a new pilot certificate—or at least a new rating, approved by the agency they soon would wish they had never begotten.

The FAA has kept itself employed over the years with decisions both good and bad. Among those decisions are the creation of ratings and certificates that have no real, practical value. Much has been made of the sport pilot certificate, and for good reason. What many forget is that its precursor was the recreational certificate, which was so unwieldy that you can probably count the total number issued on the fingers of a one-armed Tyrannosaurus rex. But, the recreational certificate did at least have a noble purpose: to bring people into general aviation in a way that allowed them to work up to being a private pilot, much like the later, more popular sport certificate.

On the other end of the spectrum is the airline transport pilot certificate, essentially a graduate degree in flying. In between are a slew of tickets that all serve a purpose: The commercial certificate allows one to get paid to fly; the instrument rating allows one to find more ways to scare oneself in bad weather than the VFR pilot; and the multiengine rating is self-explanatory. The ATP itself is useful to pilots seeking a type rating on any jet and a few turboprops that weigh more than 12,500 pounds. The ATP has slightly tighter performance tolerances than the commercial certificate, and a pilot’s academic knowledge is expected to be more polished.

But there is one certificate that is totally useless: the single-engine ATP.

In the new airline world, the multiengine ATP is required to fly as a first officer. But the ATP in a single-engine airplane achieves nothing. It isn’t necessary to fly professionally, and in the Part 135 air taxi world, where single-engine airplanes such as the Cirrus and Pilatus are common, it isn’t necessary—a commercial certificate will do just fine. Part 135 operators are required to provide pretty rigorous training, so the performance of the pilot won’t be in question, and the aircraft do not require type ratings.

Pilots who get a single-engine ATP do so just because it’s there. It gives them bragging rights. It’s the pocket-protector nerd of the aviation world who has the single-engine ATP. I have two friends who have the certificate. Each chuckles when the topic comes up. My buddy Jay only got it because it was free (the typical mindset of a pilot who has already shelled out thousands over the years for training). My friend Ed has one, too. Both tell me that there is nothing that they can do with the single-engine ATP for which a single-engine commercial certificate won’t work just as well. But, they win the bar bet on having something that does them no good and that nobody else has—just because it’s there.

Chip Wright is an airline pilot and frequent contributor to AOPA publications.

A certificate in search of an aircraft

With all due respect to my colleague on the left, this one isn’t even close. The all-time lamest pilot rating is private pilot powered lift.

What is powered lift, you ask? It’s an excellent question, primarily because no certificated civilian versions yet exist! If AgustaWestland has its way, we’ll see the first in 2017 when the AW609 TiltRotor hits the market.

In the interest of fairness and full disclosure, the FAA has granted powered lift certificates. It’s so few they don’t say how many, but the first was presented in 1997 to a Bell-Boeing test pilot working on the V–22 Osprey program. Presumably a few other veterans have received the certificate based on their military equivalency. But why?

Why didn’t the FAA just issue special authorizations for these few pilots? What was so pressing that the agency had to go through rulemaking, create an additional category, and change all our federal aviation regulation books—for the 10 pilots in the test program? It’s the definition of government waste. The mere existence of the certificate defies logic. No insurance company is going to let a low-time private pilot fly a TiltRotor. So even a commercial powered-lift rating has more relevance.

Moreover, it’s an example of a complete miscalculation. There is probably a drone flying near your house right now—maybe by a well-trained pilot, or maybe by your neighbor Bobby. The FAA has no rules on these pilots, and it’s quickly losing its authority to develop them. Yet we all can rest easy knowing the powered-lift rating is ready to go for the pilots who will fly the few dozen TiltRotors on order. And it’s been ready for almost 20 years!

The single-engine ATP, on the other hand, is a point of pride, the doctorate degree of aviation. It signifies that a pilot has superior skills and judgment, which is something we all strive for.

The private pilot powered lift is even more useless than the FAA’s most statistically useless piece of paper. Recreational helicopter is the FAA’s least popular certificate. There are none in the database right now. But I’d argue that certificate is more useful, probably smarter than even a private helicopter, because—let’s face it—few helicopter pilots are taking up lots of buddies and doing long cross-countries to busy airports.

At least they would have an aircraft to fly.