Get the app Get the app
News & Media P&E: Proficiency

Flying blind, even in good weather 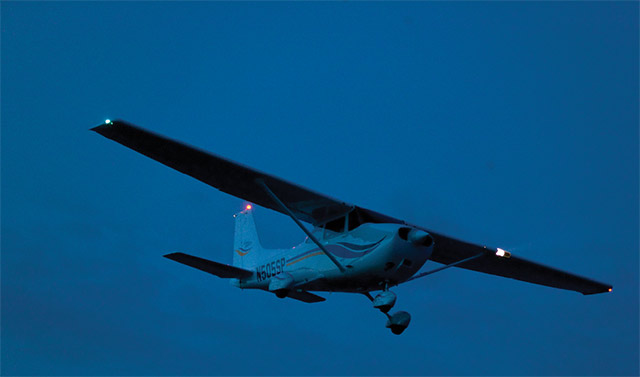 Flying blind, even in good weather

Flying VFR at night can be exhilarating. The view of the lights is magnificent. There is usually much less turbulence. Sometimes afternoon thunderstorms have died down.

There is less traffic at night. Communication is usually more casual. On one occasion at about 3 a.m., I recall the center controller and pilots enjoying a conversation about the partial eclipse of the moon.

Except over large cities, other aircraft are much easier to see at night. And if you’re actually in the clouds, it is sometimes possible to determine in what direction the lightning (and hence turbulence) is occurring and avoid it, although Stormscope and Doppler radar are the incomparably better way to do this.

Takeoffs and landings at night are a little different than those during daylight hours, but with a little practice with a CFI, they should not be a problem. Even locating the airport usually is not much of a problem. If there are a lot of lights around, it’s probably the area with fewer lights. If there are very few lights around, it’s the area that has lights. Just make sure you don’t try to land on lighted highway construction or a long factory roof that has a string of lights along the edge of the building—or anything else that could sucker you into landing on something you shouldn’t.

All in all, VFR night flying is enjoyable if you have a means of assuring that you will stay awake. (If you are flying VFR under the hood with a safety pilot, occasionally verify that your safety pilot hasn’t fallen asleep. Been there, done that—at below minimum en route altitude in mountainous terrain!) However, there are very good reasons to have an instrument rating, or at least considerable instrument flying capability, for VFR night flying—especially cross-country flights.

On several occasions I have flown a VFR flight plan at night when suddenly the whole world disappeared because I had flown into a cloud I couldn’t see. This has occurred when the visibility was far in excess of 15 miles and there was a nearby city full of lights. You have to be prepared for this. You can be instantly in instrument conditions without a clue in advance.

Visual illusions also can render a pilot effectively on instruments. On one occasion, I was flying on an IFR flight plan but in excellent VFR conditions with little moonlight, in west Texas where there are few ground lights. A light on the ground ahead in the foothills of the mountains seemed to me to be a star, meaning the aircraft was aimed at an extreme angle toward vertical. This, of course, would be disastrous if continued for even a short time. Yet when I looked over my left wing, I could see Van Horn, Texas, more than 50 miles away. This was somewhat disorienting. I rechecked my instruments several times, yet it still seemed to be a star. After cross-checking the instruments I knew they were correct, so I just followed them until that confounding light was no longer visible.

A night takeoff can present a problem you wouldn’t encounter during daylight. A short time after acquiring our Piper Apache, I took off at night from Pecos, Texas. There were no runway lights, but this was not a problem because the landing light on the Piper Apache was adequate. Visibility was probably greater than 50 miles.

The takeoff went fine, using a little higher airspeed than usual to assure that there would be no inadvertent descent after liftoff. As I was climbing, I could see the reassuring glow of the powerful landing light in the atmosphere ahead of me. There were no other lights in that direction. The glow was the only thing visible.

Then I suddenly realized that the glow would look exactly the same whether I was right-side up, upside down, or anywhere in between. I immediately went on instruments, and then I turned off the landing light.

Turning off the landing light made no difference. I was still on instruments because it was a dark night. There were no lights on the ground ahead; there was nothing to see! I was in full IFR mode with 50-plus miles of visibility.

There are multiple situations in which you need to be immediately IFR-capable when flying cross-country at night, even in excellent visibility, and this necessity may occur with no warning. If you wish to fly at night VFR, other than close to your airport with high ceilings and good visibility, instrument capability should be very high on your priority list.

Dr. Sherwood Kaip is an anesthesiologist and commercial pilot with more than 3,000 hours.

At night, lights along a road or even a factory building may look a lot like approach lights. Once, the tower controller at Willow Run Airport in Ypsilanti, Michigan, casually glanced to see the progress of a passenger airliner that had been cleared to land. The aircraft appeared just above the bottom of the tower window. Because he lived in the area, the controller realized that the pilot had mistaken the row of lights at a freeway repair site for airport lights and was about to land on road construction. He informed the pilot, who afterward came directly to the tower to thank him.

To avoid this, use your navigation radios to double-check that what you are about to land on is what you planned to land on. An airline pilot lost his job because he landed at Biggs Air Force Base instead of flying the ILS to Runway 22 at nearby El Paso International Airport. The runways are similarly aligned. The pilot had expensive electronics he could have used to confirm his location, but he never used them. And the incident was in daylight VFR, with more than 15 miles visibility.—SK