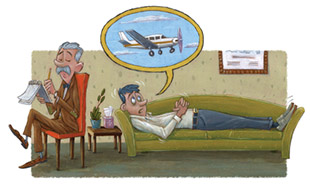 1. You are taking off or landing at an international airport in the United States and notice a few grave markers embedded in and flush with the surface of the runway. Where are you?

3. Piper named 11 types of aircraft after Native American tribes. How many of them can you name, and which was the first such aircraft to be introduced?

4. Why does it appear to the casual observer (standing abeam and some distance away) that a departing Airbus A380 or Boeing 747 climbs at a lower airspeed than a smaller jet departing at the same speed and climb angle?

5. What World War II airplane was known as “Whistling Death”?

8. Name a well-known type of aircraft in which the pilot could extend (lower) the landing gear from the wheel wells but could not retract it.

1. One can only wonder how those buried beneath Runway 10 at the Savannah/Hilton Head International Airport in Georgia can be resting in peace.

2. It is a back-course marker that indicates the location of the final approach fix of a back-course ILS approach. It is the point at which the final-approach descent should begin.

3. The Piper Apache was the first (1954). The other 10 (in alphabetical order) are the Aztec, Cherokee, Cheyenne, Comanche, Dakota, Mojave, Navajo, Pawnee, Seminole, and Seneca. Piper also developed the Arapaho and the Pocono, but these never entered production.

4. Large airplanes appear to move slower because it takes longer for them to travel a distance equal to their own length, and this is the subconscious reference that an observer uses to estimate speed.

5. The Chance-Vought F4U Corsair also was known as “Old Bent Wing” and “Hose Nose.” Its high-pitched whistling sound terrorized Japanese on the ground and was caused by the whistling sound of air entering its inlet ducts.

6. (d) Medical assistance is required. The complete ground-to-air visual code is presented in Chapter 6 of the Aeronautical Information Manual.

7. Aviophobia is a fear of flying. It is not aerophobia, which is a fear of drafts of air, gasses, or airborne matter.

8. Any of the five space-shuttle orbiters: Atlantis, Challenger, Columbia, Discovery, and Endeavor. The same was true of the research vehicle, Enterprise, but it was not capable of orbital flight.