Get the app Get the app
Already a member? Please login below for an enhanced experience. Not a member? Join today
News & Media Training Tip:'Exercise extreme caution' 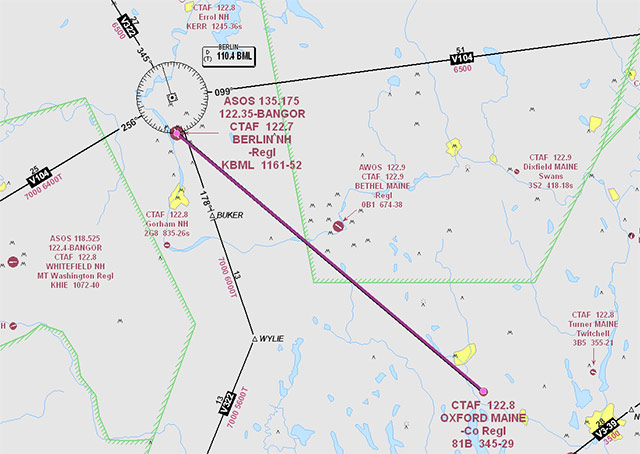 A student pilot and flight instructor are planning a flight between two airports in a mountainous area of northern New England. Although the route will not penetrate any highly controlled airspace, it is not without its own brand of procedural and decision-making challenges.

Terrain rises and real-time weather information will be scarce on most of the route from Maine’s Oxford County Regional Airport to Berlin Regional Airport in New Hampshire’s White Mountains. Strong winds aloft could create turbulence near the ridges—especially if the forecast ceiling requires overflying the peaks at a lower-than-ideal altitude.

That scenario would require taking care to avoid overflying the Caribou-Speckled Mountain Wilderness Area less than 2,000 feet agl. Surface features approach 2,900 feet msl in the area, according to the Montreal Sectional Chart valid through March 3, 2016.

Staying east of the wilderness area should avoid that concern. However, the flight might nick the corner of a complex of military operations areas (MOAs) that occupy airspace in both states.

“What action should a pilot take when operating under VFR in an MOA?” the CFI asks.

The student recognizes the wording as coming from a question on his private pilot knowledge test. There were three possible answers:

A clearance is not required before entering an MOA, the student explains. It would be impractical to have to fly to the only nearby airway traversing the MOA. “Exercise extreme caution” is the answer.

Beyond keeping constant watch for opposing traffic, what does “extreme caution” entail?

It starts with researching the MOAs in the table printed in the chart margin, which notes that the Condor 1 and Condor 2 MOAs are used “intermittently by notam.” Check their status with flight service before flight, and again en route using the frequency published on the chart.

Extreme caution means knowing the MOA’s altitude of use: 7,000 feet msl. (An asterisk below the table explains that this is the floor of the MOA.)

It means landing light on, and maintaining VFR conditions at all times.

Note also, in case of emergency, that the Bethel Regional Airport sits adjacent to the route, inside the MOA. Obtain the local altimeter setting on Bethel’s AWOS-A weather station.