Get the app Get the app
Already a member? Please login below for an enhanced experience. Not a member? Join today
News & Media Perlan 2 glider begins test flights 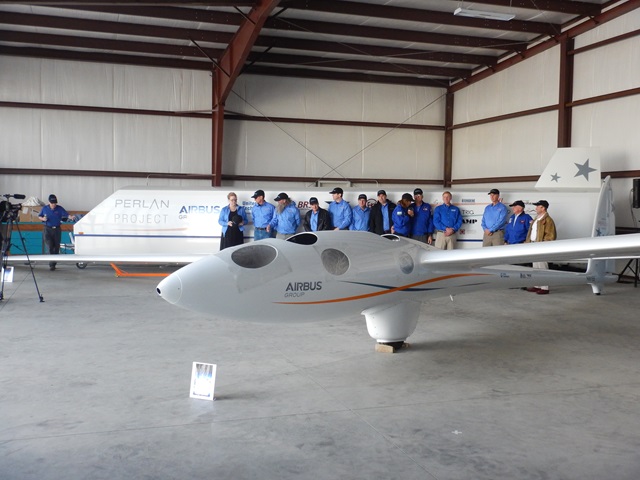 The Airbus Perlan Mission II team recently held a ribbon-cutting ceremony at Minden-Tahoe Airport to welcome the historic Perlan 2 glider to one of America’s premier soaring locations and to open flight testing in preparation to fly the glider to an unprecedented 90,000 feet next summer.

Perlan 2 chief pilot Jim Payne and sponsor Dennis Tito, the owner of the hangar and the first person to travel commercially in space, performed the ribbon cutting. Einar Enevoldson, the Perlan Project founder and Perlan 1 pilot, and Allan McArtor, Airbus Group Inc. CEO, were among other team members present.

“The unique aspect of this effort is that we are using the energy in the atmosphere to climb,” said Payne when asked about the dangers of soaring to the edge of space in an unpowered aircraft. “I suppose that with a much larger budget than ours we could develop a sailplane that could soar autonomously or soar with a remote pilot. However, soaring is as much art as science.”

The Perlan 2 is a pressurized sailplane built of composite materials that will carry two crewmembers, an oxygen rebreather system, scientific instruments, and triple-redundant safety and recovery systems. After test flights over the Sierra Nevada near Minden, Nevada, the Perlan 2 will be sent to southern Argentina for the record-setting flight. It will use the polar vortex (a cyclone of air near Earth’s polar regions) and mountain wave (high-speed winds on the lee side of a natural barrier such as the Sierra that can help gliders climb) to soar to more than 17 miles’ altitude, higher than any other aircraft can attain. The glider is named after a type of shimmering cloud found over polar regions.

“We have an education component to our project,” Payne said when asked about combining the Civil Air Patrol’s core missions of aerospace education and cadet programs with the Airbus Perlan II mission. “We hope to inspire young people to become interested in science, technology, engineering, and math. CAP cadets have already shown that they are interested in aviation. It would be a natural fit to get cadets interested.”