Get the app Get the app
AOPA will be closing at 3:15pm ET Thursday, December 1st. We will reopen Friday morning at 8:30am ET.
AOPA Members DO more LEARN more SAVE more - Get MORE out of being a pilot - CLICK HERE
News & Media Chipmunk reinvention

Their considered professional opinion was clear and direct: Don’t buy this airplane.

But Mark Meredith, a retired United States Navy A–6 Intruder bombardier/navigator, disregarded the conclusion of the prepurchase inspection and bought the airplane anyway. He flew it with an instructor from Florida to his home in Maryland and earned a tailwheel endorsement along the way.

The 1951 de Havilland Super Chipmunk in question had been involved in at least two landing mishaps over the years. It had served as a military trainer, crop duster, glider tow, and airshow performer, and it had been extensively altered. The airplane had flown on three continents (Europe, Australia, and North America), had seven coats of paint, and—although airworthy—was ragged and worn.

“The mechanics that inspected the airplane all told the same scary stories,” said Meredith, a 1979 U.S. Naval Academy graduate. “This was an airplane that had worked hard its whole life, and now it needed a thorough restoration. I wasn’t deterred by that. I was looking for a project, and now I had one.”

When Meredith got back to his Lee Airport home base in Annapolis in 2009, he started what would become a five-year restoration. The one-of-a-kind finished product has since won prestigious aircraft workmanship awards.

“I had been an aircraft maintenance officer for most of my Navy career, and I’m a hands-on guy,” Meredith said. “But I’m not an A&P mechanic, and I’d never personally worked on airplanes. I was really no different from any other first-time airplane builder.”

Meredith sent the airplane’s Lycoming IO-540 engine out for disassembly and inspection. Under the supervision of A&P mechanics, he fabricated new windshields and rebuilt the top skins. He built molds for a carbon-fiber cowling of his own design.

When the airplane emerged from Meredith’s hangar, it was a gleaming, open-cockpit aerobat that easily converts (88 screws) between single- and two-seat configurations. Although it still resembled the classic de Havilland military trainer, you had to look for the specific similarities. The engine and cowling are almost identical to those of a Pitts S–2C, and the open cockpit and turtle deck are reminiscent of a Ryan STA or a Golden Age racer.

“The most common question I get is, ‘What is it?’” Meredith said.

Meredith’s father, a U.S. Air Force pilot, introduced his son to general aviation early. As a youth, Meredith would ride his bicycle to Flabob Airport in Southern California where legendary airshow and movie pilot Art Scholl kept his Super Chipmunk and operated an aerobatic flying school.

Meredith began his military career as a crewmember in Navy combat jets, but he didn’t learn to fly himself until he was set to retire 25 years later. “Flying was my sanity during a time of big changes in my professional life,” he said. “When I started flying, I figured I had to make up for lost time, so I really devoted a lot of time and effort.”

Meredith obtained private, instrument, commercial, and flight instructor certificates and ratings. He was particularly drawn to aerobatic flying and took lessons from Bill Finagin, also a former Navy officer, in Annapolis. Meredith said he had the advantage of many hours in the right seat of military jets, but he struggled to learn the more subtle, intuitive aspects of stick-and-rudder flying.

“Navigating with a GPS in a 172 is a lot easier than trying to find a target at 360 knots and 500 feet above the ground as we used to do in A–6s,” he said. “But becoming a pilot was a transition. It’s not like everything came easily for me.”

Now Meredith is a full-time flight instructor at Navy Annapolis Flight Center, a Part 141 school, and he has 10 private, instrument, and commercial students. “I’m the old guy among the instructors, so I often get the students who, like me, are learning to fly later in life,” he said. “But I love teaching young pilots, too.”

He also participates in International Aerobatic Club contests in his Super Chipmunk at the Sportsman level. “I try to be easy on the airplane by not pulling more than four Gs,” he said. “It’s an active flier—not just a showpiece.”

There’s a reason for each change Meredith made to the Super Chipmunk. The turtle deck, for example, does more than look good. It’s got a beefy rollover structure inside, as well as a baggage area. The fuselage is all metal, as are the wings; only the control surfaces are fabric. The wings have been shortened and the ailerons extended for a higher roll rate. The flaps have been shortened to make room for the larger ailerons. The wide main landing gear are one of the few things that haven’t been altered.

Two wing tanks hold just 22 gallons of avgas—so this Super Chipmunk’s range and endurance are limited. The engine consumes 24 gallons of fuel an hour at full power and 12.5 at economy cruise, so most flights are no more than one hour from takeoff to landing. High-speed cruise at 135 knots consumes 17 gallons an hour.

The airplane weighs about 1,600 pounds empty; its aerobatic weight is 1,800 pounds, and max gross is 2,100. Each seat has a ratcheting, four-point Hooker harness system with double lap belts. The rosewood instrument panels contain VFR gauges—and a fuel totalizer.

Startup is standard for a fuel-injected engine; taxi requires S-turns to clear the area ahead; and the wide main landing gear provide lots of stability. Takeoff is in about 600 feet, and acceleration is brisk and invigorating. The authoritative rudder keeps the airplane tracking straight with minimal input, and control harmony is delightful—just like stock Chipmunks.

The roll rate with full aileron deflection is about 100 degrees per second, so it takes about 3.5 seconds to complete an aileron roll entered at 130 knots. The relatively short stick has lots of throw, so getting full deflection requires keeping your knees wide apart.

The airplane has positive dynamic stability, and stick forces are moderate. There’s very little elevator trim change from stall speed to VNE on the airspeed indicator.

Loops are particularly graceful, and the sounds and sensations of coming over the top in an open-cockpit airplane on a crisp fall day are sublime. We didn’t do any spins, but Meredith performs them regularly as part of his aerobatic routine, and he says the airplane accomplishes them with grace and consistency.

We approach at 60 knots with full flaps; the airplane touches down smoothly on the forgiving main landing gear. The oversized rudder provides lots of control down to taxi speed. Meredith says crosswinds are no problem, but the airplane weathervanes and requires constant differential braking while taxiing in strong winds.

Meredith has done a great deal of research into the history of N7DW, and he said it’s put him in touch with a variety of characters connected to it from England, Tasmania, Texas, Louisiana, and Florida. He even set up a Facebook page, Super Chipmunk Restoration, that tells its story.

N7DW was built in England in 1951 and was a primary trainer for the Royal Air Force from 1951 until Chipmunks were phased out, beginning in 1955. At that time it was shipped to Australia, where it was used as a trainer by the Royal Tasmanian Aero Club.

In 1965 it was converted to an agricultural Spraymaster, and the front seat was removed and replaced with a chemical hopper. The airplane was involved in a landing accident, and when it was repaired began a new life as a glider towplane.

It was involved in another landing mishap that required totally replacing one wing. During the repair, it next was converted to a clipped-wing aerobatic airplane. The conversion hadn’t been completed when a Texan bought the project, along with two other Chipmunks, and brought them to the United States.

The three were assembled in Texas, and N7DW was flown on the U.S. airshow circuit by several pilots, including legendary showman Duane Cole. Doug Warren and Howard Davenport also flew it in a two-Chipmunk aerobatic routine developed by Chuck Stockdale.

In 1988, it was converted to a two-seat, open-cockpit configuration for media and VIP rides on the airshow circuit. The airplane had logged about 3,500 eventful hours when Meredith bought it, and it was overdue for some tender loving care.

“It had been a working airplane its entire life,” he said. “It was never a Sunday cruiser. It was always making money for someone, or trying to.”

The FAA registry shows a total of 38 de Havilland Chipmunks in the United States, and Meredith’s airplane has become well known in vintage circles since its restoration. But Meredith says he knows little about how it compares to other airplanes with the same heritage.

“This is the first and only Chipmunk I’ve ever flown, so I really don’t know how its flying characteristics compare to others,” he said. “I enjoyed every bit of the renovation. It’s never perfect, so I’ll always have something more to do.” 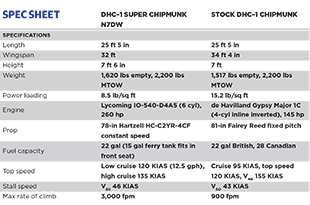