Get the app Get the app
AOPA will be closed on Friday, July 3, 2020, in observance of Independence Day.
Already a member? Please login below for an enhanced experience. Not a member? Join today
News & Videos Safety Pilot Landmark Accident 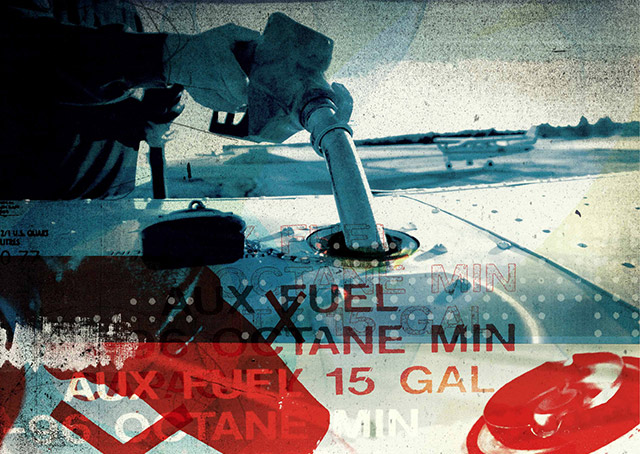 Jet A in an avgas engine spells trouble

Love the smell of jet fuel in the morning? You’d better be flying a turbine or a diesel aircraft, because Jet A in a conventional aircraft piston engine will cause a lot of trouble. This would seem like a simple problem to fix, but it’s a perfect example of Murphy’s Law. This month’s Landmark will be short on analysis because the accident chain and decision tree is generally short in these accidents. I will invest more time on prevention and what possibly could go wrong.

On August 27, 2014, a Cessna 421C arrived at Las Cruces, New Mexico (LRU), around 6:30 p.m. Mountain Daylight Time to pick up a medevac patient. While still seated in the cockpit, the pilot asked the line service technician to put 20 gallons in each tank. The tech drove up in the jet fuel truck and upon completion, the pilot assisted in securing the fuel caps. The pilot then walked to the line office and signed the fuel ticket, which showed that Jet A had been dispensed.

The flight departed shortly afterward with the pilot, the patient, and two medical crewmembers. An IFR flight plan was filed, although the weather was good day VFR. Shortly after takeoff one of the medical techs called their dispatcher to advise that they were returning to Las Cruces because of smoke coming from the right engine.

According to the National Transportation Safety Board’s preliminary report, “A witness driving westbound on the interstate highway reported the airplane was westbound and about 200 feet above ground level (agl) when he saw smoke begin to appear from the right engine. The airplane then began descending and started a left turn to the east. Another witness, driving eastbound on the interstate highway, reported the airplane was trailing smoke when it passed over him about 100 feet agl. He saw the descending airplane continue its left turn to the east and then lost sight of it. Several witnesses reported seeing the impact or hearing the sound of impact and they then immediately saw smoke or flames.”

The Cessna hit terrain upright and came to rest inverted about 100 feet from the point of initial ground contact. Fire consumed much of the wreckage, and there were no survivors. Investigators who arrived the day following the accident noted the smell of jet fuel.

The preliminary report notes, “A post-accident review of refueling records and interviews with line service technicians showed that the airplane had been mis-fueled with 40 gallons of Jet A fuel instead of the required 100LL aviation gasoline.” There may be a good reason why this accident is still shown in preliminary status at this writing more than a year later, but the probable cause seems evident.

In April 2015, a Cessna 421B was misfueled in Texas after the pilot asked the FBO to fuel the aircraft for a flight the following day. The report doesn’t say if he was present during the fueling. A preflight inspection showed no water in the sample and the fuel appeared blue in color. Nothing unusual was noted during runup but on the climbout, the airplane vibrated slightly, and climb performance degraded. After reaching 2,100 feet agl, both engines failed in quick succession, and a forced landing was made on a highway median. The smell of Jet A fuel was prominent at the accident scene. The pilot and his two passengers survived with injuries. The pilot had about 3,000 hours total time and 500 hours in type.

Both engines exhibited signs of detonation, consistent with having been operated on Jet A. The fueling records and the signed credit card receipt revealed that the aircraft had been serviced with 53 gallons of Jet A, although placards next to the filler ports indicated only 100LL fuel was to be used.

The FBO line service technician noted that the nozzle on the Jet A fuel truck was “small and round like the nozzle on the aviation gas fuel truck.” He had completed required training and testing. According to the airport manager, the larger Jet A nozzle—with an opening of 2 3/4 inches—had recently been switched to a smaller fuel nozzle to facilitate fueling military helicopters that frequented the airport.

The FAA had issued an airworthiness directive 26 years before the accident requiring that the filler ports be equipped with restrictors that reduce the fuel filler diameter to 1 5/8 inches to preclude misfueling. Despite the fact the aircraft’s maintenance records indicated the AD had been accomplished, it was found to have not been equipped with the required restrictors.

The NTSB determines the probable cause(s) of this accident as follows: “The total loss of engine power due to the use of an improper fuel type. Contributing to the accident were the servicing of the airplane with the improper fuel, noncompliance with an airworthiness directive, and the fuel nozzle installed on the fueling truck.”

There typically are only two fuel choices, not counting mogas—Jet A and 100LL avgas. Turbine engines can tolerate a little avgas, but pistons cannot tolerate any Jet A. Adding diesel power to a traditionally avgas-powered airframe such as the Cessna 172 or 182 opens up yet another can of worms: Diesels need Jet A and cannot tolerate 100LL.

Misfueling mishaps and accidents apparently follow a generational cycle as younger pilots and line service technicians join the workforce. That said, they also have happened to experienced personnel as complacency sneaks in. There have been at least four periods of misfueling emphasis: the late 1970s, early 1990s, 2005, and now we’re beginning round four. History does indeed repeat itself.

Manufacturers learned in the 1970s not to put “Turbocharged” or “Turbo” decals on cowlings because they could be misconstrued as “Turbine.” Today, some pilots and aftermarket engine suppliers still advertise that a deep breather lives under the hood. This is inviting trouble!

NASA-conducted research in the early 1980s showed that Jet A-induced detonation would rapidly destroy a piston engine. The agency discovered that anything above 2-percent contamination would result in detonation, so a Piper Matrix with 120-gallon fuel capacity could begin to detonate with as few as three gallons of Jet A.

Over an 11-year period there were some 54 misfueling-related accidents, but it was noted that many more incidents likely were caught before an accident. I spoke to a pilot at EAA AirVenture whose Cessna 414 was misfueled en route to the show, but they caught it during takeoff. The aftermath, even without an accident, is complex and expensive. The FBO’s insurance company likely will replace both engines and pay for a complete flushing of the fuel system. There is some difference of opinion over loss of use and how to deal with proration of engine time. There are no winners in this situation.

The National Air Transport Association (NATA) strongly encouraged its member FBOs to use large “duckbill” or J nozzles for jet fuel that would not fit into smaller avgas ports. Alas, not all turbine aircraft have large fueling ports, so there is an adapter. This is often used with helicopters, and is designed to be switched out in less than a minute to preclude piston misfueling. Apparently, not everyone follows the procedure to switch back to the duckbill after rotary-wing refueling. This is inviting trouble, as well.

NATA has offered line service training courses for decades and the latest version was just published online. The AOPA Air Safety Institute also has addressed the topic over the years.

If you fly a piston aircraft that appears to use jet fuel, watch out! In our small sample here, Cessna 400-series twins are vulnerable. Piper M-class airplanes such as the Malibu, Mirage, and Matrix can—and have—repeatedly been mistaken for PT6-powered Meridians or Jetprops, with fatal results. Certain Piper Navajos can be confused with Cheyennes, and there’s even a turbine conversion of the Beech Bonanza.

Now that diesel power is being introduced into the piston fleet, including such models as Cessna 172s, 182s, and the Diamond DA42, it can get very confusing as to which is which. Putting avgas into a diesel is a potential accident and guaranteed engine damage. Line service, customer service reps, and pilots must support each other and make instructions clear.

While line service has ample responsibility, pilots need to trust but verify. Sometimes that’s difficult, but here are a few suggestions: Emphasize the type and quantity of fuel you want to the line service technician or the customer service rep at the counter. I always point out that nice, clean 100LL is desired—not any of the nasty, smelly, greasy stuff. That usually elicits a chuckle, and gets them thinking about the task at hand.

If possible, try to be around when the truck pulls up to the aircraft. Look for the red 100LL placard or the black Jet A placard, as appropriate. At least look out the window. That works most of the time, but once in a great while a truck is misfueled or the fuel is contaminated—that’s really bad luck.

If you’re flying a “look-alike” as noted before, be paranoid about your fuel. Try to be present when fueling takes place, and personally secure the caps. Sump the tanks after the fuel has settled, look at the sample, and smell and touch it. Jet A has a golden, pale straw color; a greasy, oily feel; and that awful telltale smell.

Depending on the proportion of the fuel added, however, the foregoing may not be apparent. While it requires quite a bit of Jet A to be evident, it takes only 2 percent to ruin the day, and the engine(s). This also applies for diesel-powered aircraft serviced with avgas.

The ugly truth is that there is often just enough good fuel in the lines to taxi out, run up, and take off before the bad stuff reaches the engine. Things deteriorate very quickly after that.

If you weren’t there to watch the refueling, perhaps the best way to check is to look at the fuel ticket. It all comes back to economics, and everybody wants to get paid appropriately. In nearly every case reviewed, the fuel ticket reflects what was put in the tank. Caveat emptor.

> Putting Jet A into a piston-powered aircraft is bad news.

> Misfueling has been with us ever since Jet A was introduced. The industry has tried many different education programs and technologies over the years to prevent putting the wrong juice in the tank.

> With look-alike aircraft and diesel aircraft coming into the market, it’s essential to pay close attention to this seemingly routine operation. The accident record is very clear.