Get the app Get the app
AOPA Members DO more LEARN more SAVE more - Get MORE out of being a pilot - CLICK HERE
News & Media Oops!

Out of sight and out of mind

I was instructing my friend and high-school classmate, Griff Hoerner, in a 1946 Aeronca 7AC Champion.

Last month in this column I mentioned that I have had three engine failures in single-engine airplanes, but that one of them had been of my own making (“Proficient Pilot: Splash!” February 2015 AOPA Pilot). Apparently that concession of fallibility piqued the interest of some readers who requested elaboration. 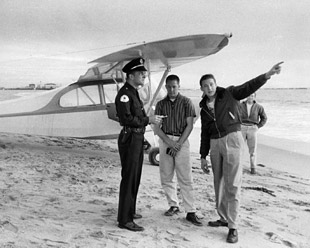 I was instructing my friend and high-school classmate, Griff Hoerner, in a 1946 Aeronca 7AC Champion. This was in January 1956 when we were 18 years old (we were born on the same day). We were practicing stalls 3,000 feet over the beach, not far from the Santa Monica Airport. We didn’t climb much higher because an Aeronca Champ doesn’t climb very well. Every 1,000 feet takes an eternity.

One of Griff’s ongoing problems was forgetting to apply carburetor heat prior to retarding the throttle in preparation for executing a power-off stall. And every time he forgot, I whacked him on the back of his head with a rolled-up aeronautical chart as a reminder not to do that again. I had learned this teaching technique from my first instructor, Mike Walters, who had whacked me mercilessly while teaching me to fly.

The Airknocker has tandem seats; the instructor sits in the rear, which facilitates said whacking. There was no intercom in those days, and whacking was an effective means of communicating displeasure without having to yell.

Because of the tandem seats, the carburetor-heat control was on the cockpit sidewall so that each pilot would have access to it. The problem with this scheme is that the front-seat pilot has to twist in his seat and reach behind himself to grab the carb-heat control. It was out of sight, and to Griff, often out of mind.

After a series of steep turns, I asked him to demonstrate another power-off stall. He retarded the throttle and slowly raised the nose. He had again failed to apply carburetor heat. I was beside myself. Nothing I could do or say seemed to have any effect. Just as the airplane was about to stall, I decided to teach Griff a lesson he would not forget. It also was one that I would not forget. I surreptitiously turned off the magnetos. He could not see me doing this because this switch also was behind him and next to the carburetor-heat control. The little wooden propeller abruptly came to a halt.

“Look what you’ve done,” I yelled in mock surprise. “You forgot to turn on the heat. We’ve got carburetor ice!”

I had turned off the 65-horsepower engine several times before this. It was no big deal. Even though the Champ did not have a starter, all that was needed to get the prop windmilling was to lower the nose and pick up some airspeed. The engine would restart easily.

After turning on the magnetos, I grabbed the control stick and yelled, “I’ve got it, Griff. I’ve got the controls!”

I began a shallow dive but the propeller was hung up on a compression stroke. With more airspeed the propeller only quivered. As we approached the redline of 129 mph (112 knots), the noise level rose and the side windows rattled in their tracks, but the propeller remained stubbornly still. Waning altitude was becoming critical, and it was obvious that the engine was not going to start. At 1,000 feet msl, I leveled off, reduced airspeed, and surveyed the beach. Fortunately, it was a cold winter day. There were no sunbathers. Equally fortunate was that the receding low tide revealed a long band of hard-packed sand upon which to land.

The touchdown and rollout were uneventful, and a policeman arrived almost as soon as we had come to a stop. Despite my explanation of this having been an emergency landing, the officer handed me a ticket for illegally parking a motor vehicle on a public beach. (A municipal court judge later dismissed the ticket.) The CAA inspector also arrived, accepted my explanation of carburetor ice, and allowed me to take off from the beach after we had determined that the “ice” had melted. Griff never knew otherwise—nor did he ever again forget the use of carburetor heat.

In picture: The author explains how he and friend Griff Hoerner (center) landed on the beach in Southern California.

Barry schiff has been writing for AOPA Pilot for 51 years.