The Lancair IV-PT is one of the highest-performance kitbuilt aircraft ever conceived. 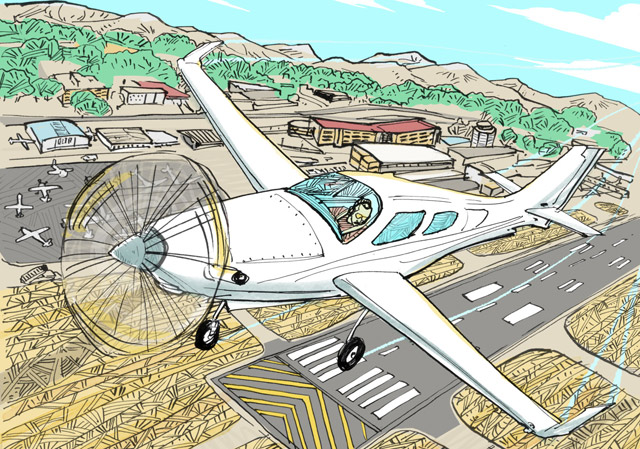 A CEO loses control in a high-performance aircraft

> The Lancair IV-PT is one of the highest-performance kitbuilt aircraft ever conceived. While the pilot had considerable experience in high-performance jets, including vintage fighters, he had received no instruction in this amateur-built speedster.

> Pilot either reduces power or suffers an unknown power reduction on takeoff and attempts a return, resulting in a spin.

A rejected takeoff is a relatively high-risk endeavor, and turning back to a departure runway usually is a bad idea. Until maneuvering altitude is reached—whatever that might be—it’s best to find something soft and cheap to hit off-airport. Stall recognition and recovery proficiency are basic airmanship for all pilots.

Low-speed aircraft handling characteristics also play a critical role in forced landings immediately after takeoffs. Experimental machines can vary widely in those parameters. Amateur builders are rightly given much latitude in design performance and construction. Some designs emphasize high-speed cruise performance, to the possible detriment of other handling qualities. A highly modified Lancair IV-PT fits that description.

This accident qualifies as a landmark because the pilot, Steve Appleton, was a celebrity CEO running the Fortune 500 Micron Corporation, a major manufacturer of semiconductors. His notoriety resulted in media discussion and considerable backlash regarding the safety of general aviation and whether CEOs should be allowed to participate.

And 2015 is the year that the NTSB has chosen to focus on stalls and loss of control. While it seems so basic, it remains elusive for too many pilots. This scenario, in some form, could happen to any of us. Will you be ready?

February 3, 2012, dawned bright and clear with light winds in Boise, Idaho. At 8:46 a.m. the Experimental Lancair IV-PT began its takeoff roll on the 9,763-foot runway. It climbed to about 60 feet before touching back down. The pilot stated he was going to “land here and stop. We got a problem.” The controller asked if he needed any assistance. The pilot responded, “Negative, I’m going to taxi back and see if I can figure it out.”

The pilot returned to his hangar area and performed some run-up activities. About nine minutes later, he asked to stay in the traffic pattern for a “couple laps.” The aircraft departed Runway 10R again, climbing to about 300 feet. Witnesses saw the aircraft roll left while rapidly losing altitude. The airplane completed about one revolution and hit terrain in a nose-low attitude.

The NTSB report stated: “At 08:55:44, the pilot made his last intelligible transmission when he requested that he would “like to turn back in and, uh, land, coming back in, uh, three.” There was a subsequent fire, which the pilot did not survive.

Based on simulations of the accident flight and witness statements, it is likely that the pilot was attempting to return to a runway and did not lower the nose to maintain flying speed. The crash signature showed the airplane was spinning on impact.

Steve Appleton could be described as a risk taker. He participated in motocross, skydiving, racecar driving, and flying high-performance airplanes—including the Extra 300, Aero Vodochody L29 (Soviet-era jet trainer), Hawker Hunter (a British 1950s single-seat fighter), and the Cessna Citation. He also was involved in an aerobatic accident in July 2004 and, according to the NTSB, “did not allow adequate clearance from the ground.”

Appleton served on the national semiconductor technology council and was a leader in that industry.

His total flight time was estimated at about 3,500 hours, and flight time in the IV-PT at less than 14 hours. There was no evidence that Appleton had received any formal instruction in the Lancair, although his insurance company had requested it.

This Lancair IV-PT, a composite, pressurized turboprop, received its Experimental airworthiness certificate in 2007. (The -PT stands for pressurized, turbine. Lancair marketed the airplane as a Jetprop, and it has erroneously been called a IV-TP, most notably in the NTSB report.) It had been significantly modified from the original design, including a higher-horsepower engine and larger fuel system.

The pilot purchased the aircraft fewer than two months before the accident. He had noted to a lineman that he liked the speed but described the handling as “squirrelly.” It’s not an uncommon scenario for the subsequent buyer of an amateur-built machine to crash shortly after taking ownership. The builder generally knows the quirks and has spent much time learning the aircraft.

The aircraft was equipped with electronic flight instrumentation, which survived the post-crash fire and was able to provide much detail regarding engine and flight performance.

A former engineer and general manager of the manufacturer stated that if the engine failed during takeoff, airspeed decayed rapidly and the nose had to be lowered quickly to maintain flying speed. If no action is taken, the aircraft would remain in a nose-up attitude and would stall in about five seconds, resulting in a simultaneous wing drop, and stall recovery was considered unlikely below 1,500 feet agl.

According to the NTSB, “A former [Lancair] employee further stated that a pilot could not use full engine power during takeoff because the IV-PT was not designed for such a high-horsepower engine and did not have enough rudder authority to compensate for the P-factor at full power. He noted that having fuel in the baggage area [the aft fuel tank] greatly affects the airplane’s center of gravity, and the airplane will be extremely sensitive in pitch.”

The NTSB found no evidence of preimpact mechanical malfunction or failure that would have precluded normal operation.

“The National Transportation Safety Board determines the probable cause(s) of this accident as follows: A loss or commanded reduction of engine power during the initial climb for reasons that could not be determined because of post-accident impact damage and fire destruction to engine systems and components. Also causal were the pilot’s failure to maintain adequate airspeed and airplane control while attempting to return to the runway despite unpopulated, flat terrain immediately ahead that was suitable for an emergency landing; his decision to take off again with a known problem; and his lack of training in the make and model airplane.”

Engines are extremely reliable but when they show any signs of indigestion it’s best not to let wishful thinking intrude. Flight data monitoring shows a fuel flow/power fluctuation on both attempted takeoffs. The cause was not discovered. Appleton correctly rejected the first takeoff but apparently thought that since he had resolved a similar problem days before, it was transient and could be dealt with. Sometimes there aren’t three strikes but only one.

However, there is no evidence of engine malfunction. The engine could have been misbehaving—or it could have been a power/controllability factor at work. Perhaps the pilot reduced power in response to the aircraft’s starting to become uncontrollable. In certificated aircraft this is taken into account, tested, and retested to ensure that there is enough aerodynamic control and time to sort through things. In a highly modified kit aircraft, the “box of chocolates” theory is in play—you’re never quite sure what you might get.

Rejecting a takeoff for any reason, once airborne, is one of aviation’s biggest challenges: there’s not much altitude, airspeed, or time. There’s a strong natural tendency to turn back to the airport, to safety, and yet that may be lethal. It’s called “the impossible turn” but sometimes it works—which is why pilots keep trying.

Every aircraft has a maneuvering altitude below which an attempt to return has much higher risk than landing off airport. Be very careful in training this maneuver. The record shows too many stall/spin accidents have resulted from training for an unlikely event—possibly more than from the event itself.

Aircraft design played a role here, as well. The Lancair IV-PT is one of the highest-performance amateur-built machines out there. As the NTSB experts noted, stall recovery at low altitude takes at least 1,500 feet. Experimental aircraft are not required to meet the FAA’s requirements relative to certificated wing performance. By comparison the TBM 900, a certificated single-engine turboprop with similar cruise performance, will recover from stalls in several hundred feet.

Wings are designed for different objectives. Some are gentle, while others will bite if given the opportunity. It’s the difference between a friendly house cat and a hungry tiger. When flying with tigers it’s best to appreciate their behavior—completely.

The Lancair Owners and Builders Organization has an active training program, as do many type clubs. Despite whatever experience a pilot may have in other models, it just makes sense to invest time and money in learning everything possible about a new-to-you aircraft—especially one with unique flight characteristics.

Steve Appleton was by any measure a hugely successful risk taker and accomplished pilot. We need people like him to move society forward. But overachievers must recognize that gravity and physics are absolute and unforgiving—as are some aircraft.

Bruce Landsberg is an aviation safety advisor for the AOPA Foundation and Air Safety Institute. He is the former president of both.