What well-known U.S. manufacturer of general aviation aircraft was founded by three brothers? 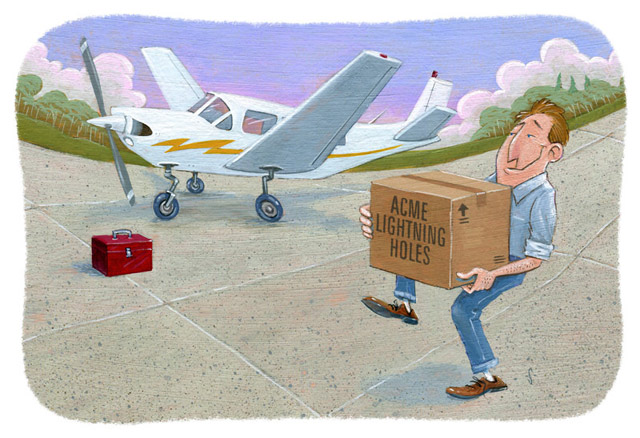 1. From reader Brian Schiff: Pilots of aircraft operating VFR typically set their transponders to squawk 1200 and sometimes 1201 (in special flight rules areas). Under what conditions are they encouraged to squawk 1202?

2. True or False? A pilot is maintaining altitude at the absolute ceiling of his airplane. The airplane, therefore, is on the verge of stalling.

3. What well-known U.S. manufacturer of general aviation aircraft was founded by three brothers?

4. Lightening holes in an airplane are related to

5. The following light twins were the first to be introduced by major U.S. airframe manufacturers following World War II. Arrange them in the order in which they were introduced (based on the dates of their maiden flights):

6. Meteorology is the science that deals with atmospheric phenomena, especially weather and weather conditions. It has nothing whatever to do with meteors, so why is this field of study so named?

7. True or false? The WASP were members of the Women’s Airforce Service Pilots during World War II and flew all 77 types of military aircraft assigned to the Army Air Force. They ferried these aircraft, tested them after maintenance, used them to tow targets for live ammunition gunnery practice, and so forth. These women, however, were civilian pilots, not military pilots.

1. When the pilots are operating gliders and are not in contact with an air traffic control facility.

2. False. The only airspeed that allows a pilot to maintain this altitude is either VX or VY (which are the same at the absolute altitude). Holding any other airspeed would result in descent.

3. In 1939, Paul, William, and Ernest Schweizer founded the Schweizer Aircraft Corporation, a sailplane manufacturer. The company later produced
agricultural aircraft and helicopters. It was acquired by Sikorsky Aircraft in 2004.

4. (d) These holes are made in aircraft parts to reduce or lighten aircraft empty weight. Metal is removed in locations where the holes would not cause any decrease in structural integrity.

6. Ancient Greeks used the word meteorologik to refer to any object appearing in the sky, including clouds and shooting stars. Eventually, flaming rocks falling through the atmosphere became a part of astronomy, while weather-related phenomena continued to be classified meteorological.

7. True. The 38 WASP killed during their service were not allowed to have an American flag placed on their coffin and could not be buried in a military cemetery. Their families were not
allowed to place a star in their windows.