Get the app Get the app
AOPA will be closed July 4th, in observance of the Independence Day holiday. We will reopen at 8:30 am ET on Tuesday, July 5.
News & Media Aircraft maintenance: Removing snow and ice 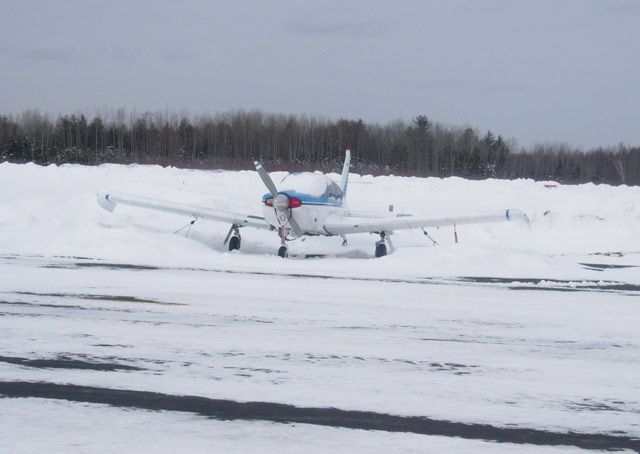 Winter can be a frustrating time for pilots across the northern latitudes, especially this particular New England winter where instead of saying “blizzard,” we now simply say “Monday.”

Much has been written about the dangers of frost, snow, and ice contamination on aircraft, and we’ll cover that here too.  But, let’s start with a few basics for those pilots measuring their snow-clearing tasks in feet.

Assuming that you’ve now excavated the basic aircraft structure, we can move on to the more traditional tasks of clearing snow and ice to aid in a safe departure. That starts with a basic acceptance that no amount of contamination of the exterior of the aircraft is acceptable prior to flight. What may seem like a light coating of frost of residual ice can have a dramatic effect on the lifting ability of the wings and handling qualities of the aircraft.

Without doubt, the safest and most thorough method of clearing the aircraft is to move it into a heated hangar long enough to melt all snow and ice, then drying the residual water before moving the aircraft back out into the cold.  This last step is critical. The resulting melted water can migrate into hinges, spinners, control surface interiors, brakes, etc.  If allowed to “flash freeze” in place when the aircraft is moved back out into the cold, it can create dangerous imbalances or even block the full range of motion for control surfaces.

If you don’t have access to a heater hangar, the next best option is to use some form of deicing fluid. One reasonably-priced option is the pink RV plumbing antifreeze available at most hardware stores. There are a variety of variations available, most made from a blend of propylene glycol, alcohol, and anti-corrosion additives. Most are environmentally friendly, but be careful to test for staining on an inconspicuous part of the aircraft prior to use (especially on composites). Using a garden pump-style sprayer is an easy application method. Don’t forget to manually dry the aircraft prior to flight.

Avoid using chemicals of any kind on aircraft windows. Warm water is the best solution, taking care not to “shock cool” the plastic. Dumping a bucket of hot water on a freezing windshield is a sure way to crack it.

One last note, avoid scraping ice and snow at all costs. Credit cards, scrapers, and even brooms can scratch the paint and windows. Take your time to do it right so you don’t regret your actions come springtime.

Few pilots are fortunate enough to pamper their aircraft in a heated hangar through the winter months.  For the rest of the pilot community, it takes some planning and diligence to get out to the airport on a regular basis and properly clean your aircraft. But, then again, every airport visit is another opportunity to go flying as well. So, get out there, clean it right, and enjoy the winter landscape from the air as it was meant to be seen. Happy flying!

Jeff Simon is an A&P mechanic, pilot, and aircraft owner. He has spent the last 14 years promoting owner-assisted aircraft maintenance as a columnist for several major aviation publications and through his how-to DVD series: The Educated Owner. Jeff is also the creator of SocialFlight, the FREE mobile app and website that maps over 15,000 aviation events. Free apps available for iPhone, iPad and Android, and on the Web at www.SocialFlight.com.