Get the app Get the app
News & Media Father, son solo on same day 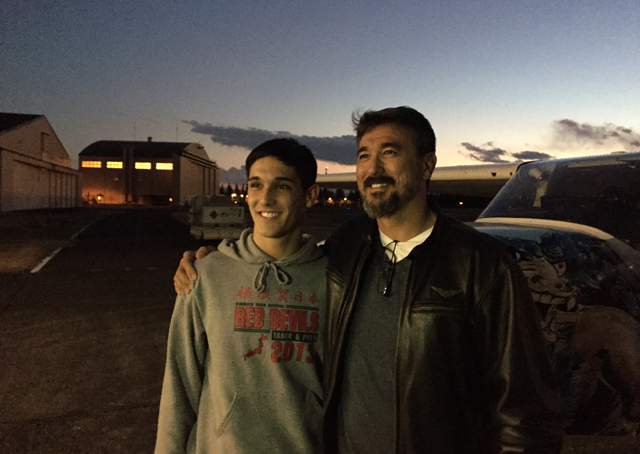 A five-hour round-trip drive to the airfield makes scheduling lessons difficult, but the payoffs include an unobstructed view of Mt. Fuji and the satisfaction of father and son accomplishing goals together.

Jimmy Brown and his son Connor soloed on the same day in December at Yokota Air Base in Japan, where the two are training for their private pilot certificates through the Yokota Aero Club. The club offers American flight training with a Japanese twist, but the satisfaction of a first solo transcends nationalities.

Connor, 17, said he originally wanted to fly as a career in the military, but found he is unable to for medical reasons. Yet plenty of people learn to fly without ever joining the military, his father pointed out. Jimmy, who retired from the Navy and now works for Missile Defense Agency in Yokosuka, Japan, said he called around and discovered the Yokota Aero Club. The Browns visited the club and took a flight.

“I could tell Connor was hooked and so was I,” said Jimmy. “Connor is going off to college soon and saw this as another father-son activity that we could both reflect on. I’m glad we did it. We both love it.”

On Dec. 6, Jimmy took off solo in one of the club’s Cessna 172s in perfect conditions, he said. After his third takeoff, however, an overcast moved in pretty quickly at about 2,000 feet agl and he encountered bumpy air, he added. “During the downwind that was followed by snow…..SNOW! I’ve never seen that in flight during my training,” he said.

Connor was in the air during his father’s solo, and he went for his second flight of the day—his solo flight—after the sky had cleared and the air was smooth, he said. Jimmy said he thought, “Is he really doing this?” as Brenden Shower, both students’ instructor, got out of the aircraft and Connor taxied away.

“I watched him throughout his flight in the pattern all the way to the runway,” he said. “All I can tell you, is a hundred things ran through my mind. Despite it all, I was overwhelmed with pride. That was my boy in that airplane.”

Connor said he couldn’t believe that it was happening when he took off solo. “I do remember looking over right after my takeoff before turning to downwind and forgetting my instructor wasn’t there. I was shaking up until I landed.” He said he talked through everything that should be happening throughout the process. Since it was close to sunset, he did just one takeoff and landing, he said.

Jimmy said that earlier in the day Connor had told him he didn’t intend to solo that day, and Jimmy didn’t want to force him. But he trusted Shower, who had instilled the confidence in him for his solo, and was also confident that Shower would make the right call about Connor’s solo decision, he said.

“Your solo is memorable to begin with… to do it on the same day with your son, priceless,” Jimmy said.

The first Cessna 150 for the Yokota Aero Club arrived in Yokota on Feb. 5, 1971, Yokota Flight Training Center/Aero Club Director Victor Arzuaga said. Club aircraft were flown to Japan as space was available on a Georgia Air National Guard C-124 Globemaster, he added. “The first paying flight was 7 February 1971 and by 21 February 1971, the club had flown 136 hours on Cessna 150 aircraft,” he told AOPA in an email.

Today the club, which is open to U.S. military and their immediate families, retirees, and other U.S. government personnel stationed overseas, maintains a fleet of four Cessna 172s. The two T-41As (a military version of the 172) and two 172Ms range in model years from 1965 to 1975 and have been upgraded to technically advanced aircraft; Jimmy noted that the aircraft are “Not just well maintained. Pristine and advanced…. All glass cockpit, auto pilot, and IFR certified. Not too shabby as I understand it.”

Arzuaga said the club has 10 instructors. One is pretty much full time, while the others are “weekend warriors,” he said—but none are there just to build time. “Our instructors are military, local nationals, flight attendants, attorneys, doctors, etc.; all professionals. They're here because of their passion for aviation is second to none,” he said in an email. The club has only two full-time employees to keep expenses down, Arzuaga said; membership is $35 for a one-time initiation fee and $30 monthly dues. Ground and flight instruction are $35 an hour, and the 180-horsepower 172s rent for $129 an hour, he said. Membership waxes and wanes because of changeover at the air base, Arzuaga said, but it currently stands at 94, with 25 inactive because of deployments, work schedule, leave, or other factors.

Training in the Land of the Rising Sun

The club has 43 students, Arzuaga said, but it has seen dwindling numbers because of a lack of an examiner in the area for checkrides. Until November 2013, he said, the club would bring in a designated pilot examiner from Okinawa, 900 miles away, at the applicant’s expense; with that option now gone, the club tries to bunch students together for checkrides and bring in a stateside examiner for a group while it requests a better option from the FAA. 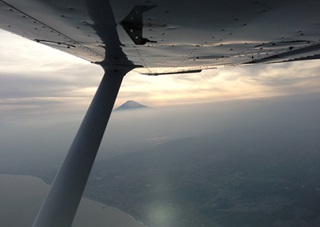 Everyone flying out of the aero club has to abide by FAA, U.S. Air Force, International Civil Aviation Organization, and Japanese Civil Aviation Bureau regulations, Arzuaga said. Shower, Yokota Flight Training Center’s chief instructor, said that flying in U.S.-registered technically advanced aircraft from an Air Force base in busy Japanese airspace poses many challenges to new pilots, and that the average instructional time before one’s solo reflects that fact. The Browns each had about 30 hours before their solo, he said. While the Browns noted that airspace in Japan is not much different from in the United States, they said they’ll be exposed to more of the airspace and communications as they progress in their training. And with the challenges of foreign airspace come rewards.

“My favorite part about training in Japan is being able to see Mt. Fuji on a clear sunny day,” wrote Connor. “It’s so much different seeing the mountain at 4000 ft rather than from the ground with multiple buildings or other land masses blocking the way.”

Each of the aero club’s aircraft bear vivid vinyl designs that show appreciation for its host country, Arzuaga explained. The tails of all the aircraft feature the iconic Great Wave at Kanagawa, a famous example of Japanese art. The Cessna 172M that Connor soloed also has Shisa, a traditional Ryukyuan decoration resembling a cross between a lion and a dog that often appears in pairs to ward off evil spirits and keep good spirits in, and the other aircraft also pay tribute to Japanese traditions.

As the Browns continue their training, Connor is looking forward to a familiar aviation tradition, the $100 hamburger, with a Japanese twist. He said he’s looking forward to his cross-country to Oshima Island; “I’m really excited to see if the curry they sell is as good as the instructors make it seem.”

Jimmy said he hopes he and Connor can earn their private pilot certificate before Connor goes off to school in August or September. “I want Connor to look back on this and cherish all the fun we had together setting goals, helping each-other, a little father son competition to boot,” he said. “I know I will.”