The fact that Sailor Gutzler had to walk away from her parents, sister, and cousin, believing all of them to be dead in the wreckage, and set out in the cold Kentucky night toward uncertain rescue is the stuff of nightmares. The young girl’s courage and determination have earned her tremendous respect. It will be some time before enough is known to draw conclusions about the Jan. 2 crash of the Piper Seneca carrying Gutzler, the lone survivor, and her family from Florida home to Illinois, or find lessons that can be learned from this particular incident, but surviving a forced landing, crash, or ditching is a subject long studied by aviators, and there is a great deal all pilots can do to improve the chances of survival for themselves and passengers alike.

Pilots who learn about wilderness survival, and share the basics of communication, emergency equipment, and emergency procedures with passengers certainly improve everyone’s odds of surviving after an accident.

Those chances, broadly speaking, are very good—more than 82 percent of general aviation accidents between 2007 and 2009 resulted in no fatalities, according to NTSB data. General aviation during that period averaged seven accidents for every 100,000 hours flown (an approximation based on flight hours estimated by the FAA). The fatal accident rate was (and remains) much lower—about 1.2 for every 100,000 hours. That equates to an individual pilot flying 100 hours a year for 142 years before an accident, and more than 800 years before a fatal accident. That is cold comfort for the unfortunate few, including the Gutzlers—and other grieving families—but also food for thought.

“No matter how unlikely this might be, we’re all well-served to be prepared,” said George Perry, senior vice president of the AOPA Air Safety Institute.

Many of the same skills required for aviation come into play after a flight ends unexpectedly for whatever reason, and the Air Safety Institute Safety Advisor “Survive: Beyond the Forced Landing” published in December (part of an education project funded by the Canadian Owners and Pilots Association) offers some basic guidance. Gear and supplies, appropriate clothing, and ability to communicate through emergency beacons, radios, cell phones, signal mirrors (or even a simple chemical light) have saved lives. Pilots should ensure their passengers know how to use emergency equipment in the event the pilot is incapacitated, and the Air Safety Institute also offers guidance on briefing passengers, including a briefing checklist, customizable briefing card, and a video on that topic.

Family members told NBC News that 7-year-old Sailor learned basic survival skills from her father, Marty Gutzler, a certificated flight instructor with more than 4,000 hours of experience. While unusual, her story is not unique: Other children of the same or similar age have survived being lost in the wilderness thanks to a combination of survival skills, mental fortitude, and practical thinking, the Christian Science Monitor noted, citing examples not connected to aviation.

Pilots can learn life-saving skills from many sources, including the Air Safety Institute. The FAA and private providers also offer wilderness survival training and practical experience. 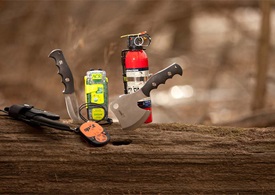 Experts agree a basic working knowledge of survival techniques combined with clear thinking in a crisis are the most important factors determining the outcome. Survival gear can be important, depending on the situation, but whatever equipment can be salvaged from a damaged aircraft, the most important asset in a survival situation is always the human mind.

“If there is a fire, your only reliable survival gear may be what you are wearing,” the Air Safety Institute Safety Advisor notes. “Dress for the terrain and weather conditions you will be flying over rather than your departure or destination.”

Experts note that time is of the essence, and flight plans significantly improve the odds for those who survive the first moments on the ground. According to U.S. Air Force statistics cited by the FAA in a text for the agency’s basic survival course, rescue crews on average are notified of a missing IFR flight 1.1 hours after the incident, with rescue completed in 11.5 hours. The time to notification increases to 4 hours for VFR flights with a VFR flight plan on file, with rescue following in an average of 18 hours. For VFR flights flown without a flight plan, it takes, on average, 18.5 hours for rescue crew notification, and 62.5 hours for actual rescue—beyond the average survival time for even uninjured passengers and crew exposed to the elements. A 2007 study published in a journal of wilderness emergency medicine found a 99-percent exposure mortality rate for uninjured victims whose rescue was delayed beyond 51 hours. Odds of survival increase to 60 percent if pilots and passengers are found within eight hours, according to another study.

Perry said the Air Safety Institute has developed many educational resources over years of effort (made possible by AOPA Foundation supporters).

“We encourage all general aviation pilots to take a look at that,” Perry said.

'Beyond the Forced Landing'

Long before the latest aircraft search and rescue made headlines, AOPA’s Air Safety Institute began developing a new video that introduces viewers to key strategies and techniques for improving chances of survival in case of a forced landing or other incident. That video, “Survive: Beyond the Forced Landing,” has just been added to an online collection of educational resources on the topic, and was developed in conjunction with the Safety Advisor with the same title, a project made possible by a donation from the Canadian Owners and Pilots Association.

The Air Safety Institute will also present live seminars on the topic in various locations throughout the year.