Get the app Get the app
News & Media Letters: From our December 2014 issue

Letters: From our December 2014 issue

Author Barry Schiff’s story on the Reagan Library and how Air Force One landed on a California mountainside elicited memories—and some criticism from our members.

“The article on Air Force One was quite interesting except for the laudatory tone towards Reagan. He was only one of seven presidents who used this aircraft. Yet in this piece he got most of the publicity. Except as they directly affect aviation, it is better to keep politics out of this magazine.”

That was a nice article about President Reagan’s Air Force One, SAM 26000. Your story, however, is incomplete. This was not the first jet-powered presidential aircraft, nor was it the first 707. The first presidential jet plane was a specially built Boeing 707-120 known as SAM 970 delivered in 1959. SAM 970 replaced President Eisenhower’s Super Constellation, the Columbine II, and flew presidents Eisenhower, Kennedy, Johnson, and Nixon. While the newer Boeing VC–137C aircraft described in the article entered service in 1962, SAM 970 continued service in the presidential fleet until June 1996. SAM 970 is now on permanent display at the Museum of Flight at Seattle’s Boeing Field.

Barry Schiff responds: I never said that the B-model 707s were the first or only 707s used in presidential service. It was not my intent to discuss or mention all aircraft that served as Air Force One. SAM 970, of course, was a shorter, domestic model with straight (non-fan) turbines.

“Affecting the Course of History” was a very good article except for the error about the “anomaly that occurred on August 8, 1974, when Air Force One departed Andrews Air Force Base with President Nixon on board.” This occurred August 9, 1974, and was also the date my wife, Catherine, and I were married. We were probably taking our wedding vows at the time President Nixon was flying back to Southern California 40 years ago.

The fact that the crew of Colgan 3407 flew an airworthy aircraft into the ground cannot be disputed; however, Bruce Landsberg’s commentary misses on many of the issues with the regional industry (“Safety Pilot Landmark Accident”). I know; I have worked in the regional airlines for the past 14 years.

Small communities did not lose service because of a lack of qualified pilots; Comair and Colgan dumped thousands of qualified pilots on the market when they went out of business, and many of these pilots went overseas or chose to leave the industry. Low wages—that do not allow for a quality of life in many of the high-cost cities crews are based—lead to commuting. Creating an efficient commutable schedule is not in the interest of the company, so many regional pilots spend half of their 11 days off a month traveling to and from work.

FAR 117 did nothing to address this, nor does it change regional pilots’ obligations to family and community. Look for the regional industry to offer ATP training to lure new pilots to the industry, and a new indentured servitude to those that accept. They won’t attract the best talent until they address wages and quality of life—and the risk of another 3407 is still with us. 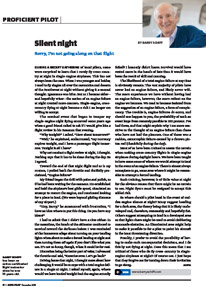 Night flying is perfectly safe and has been for 20 years. Nearly every night of the week there is a National Guard aircrew out flying at night with absolute confidence of making a suitable forced landing area in the event of an in-flight emergency. Using night vision goggles (NVG) we can operate in near total darkness and see details as small as deer eyes at 100 yards. Flying NVG-aided is frankly safer than daytime VFR because strobes really stand out and you see them for miles. Instead of thinking that night is not a time for aviating, it seems to me that AOPA should be advocating for civilian NVG standards among GA pilots. Once you fly with them you won’t want to fly without them.

“I think you have forgotten the purpose of AOPA in your article ‘Silent Night.’ The purpose at AOPA is to promote safe aviation, not stifle it. With the logic employed in your article you may as well never take a bath, either. You may slip and hurt yourself getting into the tub. Any flying involves risks.”

For more than 50 years I have been looking forward to each issue of AOPA Pilot. The articles by Barry Schiff are the first I read and “Proficient Pilot: Silent Night” was no exception. I always find at least one pearl from his well-thought-out and well-written articles.Flying at night in single-engine airplanes has had much discussion and his thoughts bear serious consideration. I also will add another flying adage to my collection: “Turn on your landing lights when about to make a forced landing at night and then turn them off again if you don’t like what you see.” Funny, possibly, but food for thought.

I enjoyed Tom Haines’ “Waypoints” column, and I agree fully with the importance of continual aviation challenges to foster aircrew development. I do, however, disagree with the statement that differences between photo formation flying and military formation make the latter less difficult than the former. Military formation flying encompasses more than the basic parade position often seen at airshows, in photos, and during departure and recovery. Take for instance, a four-ship night IMC tanker join and NVG refuel. That is military formation flying, conducted close aboard, culminating by touching another airplane. This does not compare to a day, VFR, “good deal” photo op. I assume Haines was comparing a military-style parade position to the photo op evolution. This makes the most sense. A more specific or detailed comparison would have prevented misinterpretation.

How often do you fly cross-country at night in single-engine airplanes?

The results from the poll questions in Aviation eBrief do not necessarily represent the views of pilots, aircraft owners, or AOPA members and therefore should not be used for research purposes.

Adventure and exploration are intrinsic in flying, but when you add seaplanes, tropical islands, friends, sunshine, a deep blue ocean (and some really big fish) the excitement factor goes through the roof. Senior Editor Dave Hirschman and Photographer Chris Rose joined a group offellow pilots on a dive trip to theBahamas (see “Fresh Catch,” page 50). And even though they didn’t come back with any lobster tails, they brought an aviation tale. “Flying over the Bahamas is a joy at any altitude,” Hirschman says. “But from the up-close perspective of a seaplane, it overloads your senses.” Thanks to Gary Lickle for taking AOPA along on a trip that’s well within reach for GA aircraft.