Get the app Get the app
News & Media Pilot Briefing: No secret sauce

Paragon Flight is living up to its name. 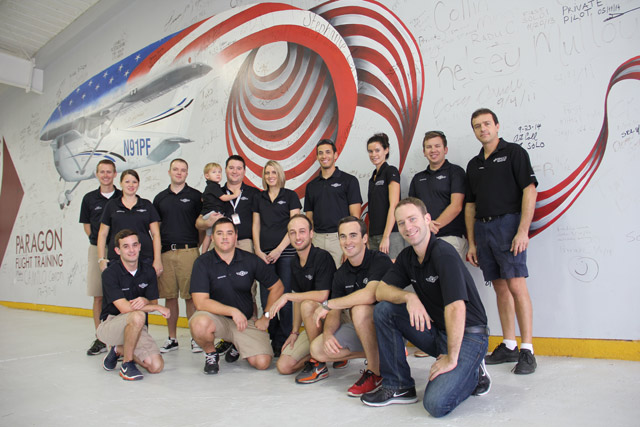 Paragon Flight is living up to its name. The Ft. Myers, Florida-based flight school was recently named best in the country in AOPA’s annual Flight Training Excellence Awards.

The school’s mix of great flight instructors, nice airplanes, excellent leadership, and focus on the customer made it the top scorer in the association’s customer-feedback award program.

Now in its third year, the AOPA Flight Training Excellence Awards recognize the best in flight instruction, the results of which are based on responses to an extensive poll filled out by the school’s own customers. In the case of Paragon, dozens of students gave glowing reviews of the school, noting the school’s customer focus, friendly atmosphere, approachable staff, professional instructors, and fun events.

Co-owners Jeffrey Wolf and Chris Schoensee say they don’t do anything secret. It starts with good people. “We spend a tremendous amount of money and time recruiting the best instructors we can,” Schoensee says. The process includes a number of phone interviews, and an in-person interview—even if the candidate is across the country. That’s a rare practice in flight training.

Mix in fly-outs to the Bahamas, a good syllabus, and a focus on celebrating success, and you have the ingredients of a great school. Ultimately it comes to making sure the customer is having a good experience. “These are people’s dreams,” Schoensee says. “It’s our duty to make sure the client is afforded that opportunity.”

Read over Spencer Watson’s AOPA Flight Training Excellence Award poll results and it’s clear why he was named best flight instructor of 2014. As a Bonanza specialist for Aviation Adventures, a flight school in Manassas, Virginia, Watson gets to share his passion for flight and in-depth knowledge with his students. One student said Watson had researched topics for him at length, and another said he was fully vested in his success. Others said Watson increased their confidence or got them over a fear of flying. A trained air traffic controller, Watson brings a unique skill set to instruction that his students fondly noted.

Cirrus Aircraft has a second Vision jet flying for certification tests. The seven-seat personal jet is expected to sell for $1.96 million.

The first Vision SF50 jet used for FAA certification testing began flying in March 2014, and has logged nearly 220 hours over 150 flights. A third flight test model was expected to join the fleet soon.

Cirrus hopes to have certification complete and begin deliveries by the end of 2015. Cirrus said it has more than 500 orders for the jet and expects to build 90 in 2016, ramping up at a rate of 125 aircraft per year in 2017.

The company is setting up a flight training and mentorship program for pilots, promising an intuitive transition for those familiar with piston aircraft—including the Cirrus SR20 and SR22 models, which have logged more than 6 million flight hours among a fleet of 5,000 aircraft.

The SF50 is expected to cruise at 300 knots at 28,000 feet with a 1,000-nautical-mile range. It will seat up to five adults and two smaller passengers, and will be fitted with the same type of ballistic parachute system standard on all Cirrus aircraft and credited by Cirrus with saving nearly 100 lives in the SR-series fleet.

Stall speed, with flaps mid-60-knot range (not yet calculated) 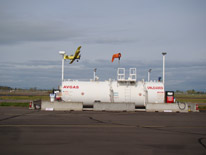 Turns out it takes only a dollar to get the nonflying owner of an older aircraft to pull the airplane out of the hangar and return to the skies. Larry Graves manages airports for Josephine County, Oregon, and has promoted the sale of ethanol-free, 92-octane mogas at Grants Pass Airport. It is best suited for low-compression engines found in smaller, older aircraft. It was enough to return pilots to the skies.

Available mogas—sales started in August 2014 and amount to 1,000 gallons a month—has encouraged a return to flying by owners of Piper Cubs as well as Cessna 140 and 170 aircraft, Graves said. 100LL was $5.89 at the self-service pump while mogas from a dedicated tank was $4.99.

At Lebanon State Airport, the only other airport in Oregon offering mogas, 100LL was $5.60 a gallon while mogas was $4.70.

Large refineries remain largely uninterested in supplying mogas to airports, but the two Oregon airports have found smaller refineries willing to deliver up to 2,500 gallons per sale. The Carson Oil Company supplies mogas to Lebanon State Airport while Colvin Oil delivers it to Grants Pass. At Grants Pass, Graves stores the fuel in a vintage 1965 Chevrolet fuel truck restored by the local Experimental Aircraft Association chapter and a restoration company. It passed state inspections. In addition, fuel is tested for ethanol, particulates, and other quality measures, as any fuel is tested. —AKM 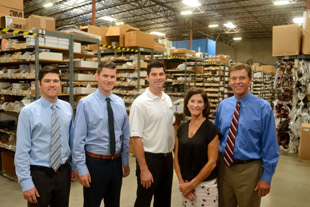 When aviation supply company Aircraft Spruce and Specialty was launched 50 years ago June 2015, it sold only one product: aircraft-grade spruce lumber. “It was much like we do today—we get it in large pieces and cut it into small pieces, whatever the customer wants,” explained Jim Irwin, company president and oldest son of its founders, Flo and Bob Irwin. They started Fullerton Air Parts at Fullerton Municipal Airport in 1956, grew the business, and sold it in 1965—when they started Aircraft Spruce.

Today, the company publishes a catalog with nearly 1,000 pages. “We have about 75,000 different products,” he said. “I think we’ll hit 1,000 pages with our fiftieth anniversary catalog.” Its headquarters in Corona, California, is near Corona Municipal Airport—a shuttle van picks up fly-in customers—and there are facilities in Peachtree City, Georgia, and Brantford, Ontario, Canada. Employment has grown from two to about 150.

Irwin’s wife, Nanci, is vice president of the company, and their three sons are involved in the business as well—Mike is purchasing manager, Jeff is operations manager, and Rob is brand development manager. “It’s been a family tradition for some time,” Jim Irwin said.

Aircraft Spruce’s expansive inventory, combined with the multiple locations, dictates a sophisticated order management system that’s normally invisible to the customer. About half of Aircraft Spruce’s orders are made online; the rest are placed by phone. “That phone call will ring to any available agent,” whether in California or Georgia, Irwin said. “The computer system tries to ship from the closest warehouse.”

The completed order is sent to the printer in the warehouse closest to the aisle where the parts are located. Merchandise is pulled, checked, packaged, and shipped—usually the same day it’s ordered. Aircraft Spruce places many special orders, as well. “Many times, we will drop ship that directly to the customer,” Irwin said.

A wiring harness department was recently created, offering standard and custom harnesses; each is bench tested before shipment. The Corona store has been rearranged, with more apparel and an interactive headset display featuring 20 different models. The company offers about 45 video product reviews on its own YouTube channel. They have received more than 300,000 views, Irwin noted. Each October, Aircraft Spruce holds a customer appreciation day at all three locations. “It gives us a great opportunity to meet and greet our customers,” Irwin said.

Softex-Aero, located in north-central Ukraine, received Ukrainian certification for a pusher-prop four-seat twin last fall and plans to bring it to market soon. The price of the V–24 aircraft—aimed at the training, small business, and utility markets—has not been announced. The four-year-old company must seek certification in Europe and follow that with certification by the FAA before sales can begin in the United States. The company also plans a five-passenger, 145-knot gas-turbine helicopter, the V–51.

The V–24 can be powered by Rotax 912 or 160-horsepower Lycoming IO-320 engines, with future plans to fit turboprop engines. With Rotax engines the aircraft can cruise at 118 to 135 knots true airspeed, depending on power setting, while a cruise speed of 160 knots is claimed when powered by the Lycomings. The turboprop is proposed to cruise at 220 knot true airspeed.

Stall speeds for the V–24, which has a 36.7-foot wingspan, are 53 knots with flaps down and 70 knots indicated airspeed with flaps and gear retracted.

A variety of avionics are promised, including a glass cockpit from MGL Avionics in South Africa. A specification list shows the aircraft can withstand plus 4Gs and minus 2Gs, unusual for a utility trainer.

The aircraft first flew in 2012 and was shown at Aero Friedrichshafen in Germany in 2014, as well as the Middle East Business Aviation show in December 2014.

The V–51 helicopter will use the 370-shaft-horsepower Rolls-Royce M250 engine, and has a maximum gross weight of 3,196 pounds, with an empty weight of 1,653 pounds. The company provided no information on pricing or certification dates. —AKM

The Breitling Jet Team is coming to America in 2015, with an itinerary of North American appearances that will begin at the Sun ’n Fun International Fly-In and Expo April 20 through 26 in Lakeland, Florida.

The team, sponsored by Swiss watchmaker Breitling since 2003—when it grew from four to seven Aero L–39 Albatros jets—is making its first North American foray, appearing at major airshows across the United States and Canada, including the biggest of them all: EAA AirVenture. The itinerary was announced in December at the International Council of Air Shows convention in Las Vegas.

The team performs a 25-minute routine of precision formation aerobatics similar to a military jet team, and the pilots bring military training and experience to bear, with at least 5,500 flight hours apiece.

Team leader and founder Jacques “Speedy” Bothelin has more than 10,000 hours, and has led the team under its various names and iterations since 1980, when Patrouille Martini hit the airshow circuit with a formation of Mudry CAP 10s.

“We are so excited to share our performances with North American fans and show them what we can do,” Bothelin said in a news release.

Bothelin and his fellow Breitling pilots pride themselves on polish, precision, and safety. The team toured Europe and Asia in recent years.

A North American F–86 Sabre jet once flown by multi-war ace Robin Olds has returned from England, where it was on the airshow circuit following restoration. It is claimed to be the only Model A Sabre in the world, and the oldest flying jet.

In the United States its duties included defending the Los Alamos laboratories from the threat of Soviet bombers during the Cold War.

The supersonic fighter was purchased by Dr. John Swartz and shipped to Rockford, Illinois. Aircraft Restoration Company of Duxford, England, disassembled the aircraft for shipment to the U.S. Heritage Aero will reassemble it to flying condition.

During 24 years of operations it is claimed to have missed only five shows because of maintenance problems. —AKM 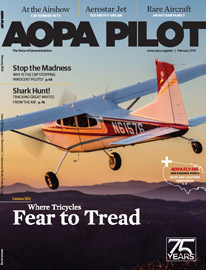 Mike Fizer’s image on the February cover of a Cessna 180 Skywagon flying in California was the reader-favorite AOPA Pilot cover in 2014 according to a recent online poll. Second favorite was June’s Stearman “Above the Everglades” photographed by Chris Rose. Third was April’s Beech 18 on floats “Timeless Traveler,” also by Chris Rose.

This month in aviation

February 3, 1995. Eileen Collins is first woman to pilot a spacecraft.