Get the app Get the app
AOPA will be closed July 4th, in observance of the Independence Day holiday. We will reopen at 8:30 am ET on Tuesday, July 5.
News & Media Pilot Briefing: Milestones

Geraldine “Jerrie” Mock accomplished the feat that Amelia Earhart set out to achieve in 1937. 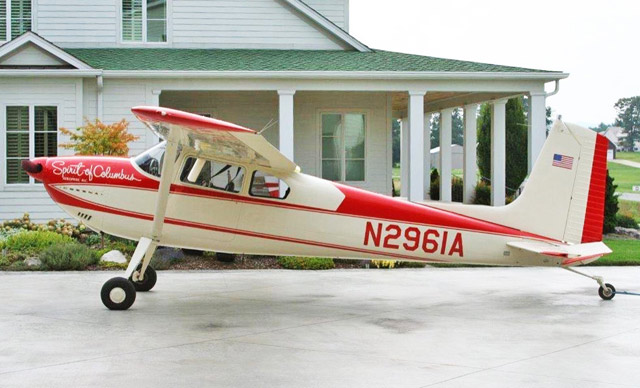 Geraldine “Jerrie” Mock accomplished the feat that Amelia Earhart set out to achieve in 1937. She flew solo around the world in 1964 after planning the 29-day flight in the basement of her home in Port Columbus, Ohio. The aviator died in September 2014 at her home in Quincy, Florida, at the age of 88. Mock flew the route in a Cessna 180, The Spirit of Columbus, which had a new 225-horsepower engine and was modified to carry 178 gallons of fuel.

Dick Merrill was a geology student at Ohio State University in 1964 when Mock made national news with her solo flight around the world in a single-engine airplane. He was also a pilot (and the son of a pilot) who had read about Mock in Flying and AOPA Pilot magazines.

Fifty years later, Merrill has paid tribute to Mock and her beloved Cessna 180 by duplicating its paint scheme on the 1953 Cessna 180 he owns.

“I called her to ask permission” in January or February 2014, Merrill said. “She answered the phone and said she thought it was a great idea.” He planned to fly it to Florida to show her when the paint job was complete.

Unfortunately, Mock didn’t get to see the airplane that now sports her Cessna 180’s livery. She did see photos that Merrill had sent to her grandson. “He showed it to her and she thought it was her airplane. When she saw that picture, she said, ‘That’s a picture of Charlie!’” he said. Charlie refers to her airplane’s N number, 1538C.