The problem with moonshine

Without a word he reached up and buried his entire little finger in a hole in the aluminum skin. 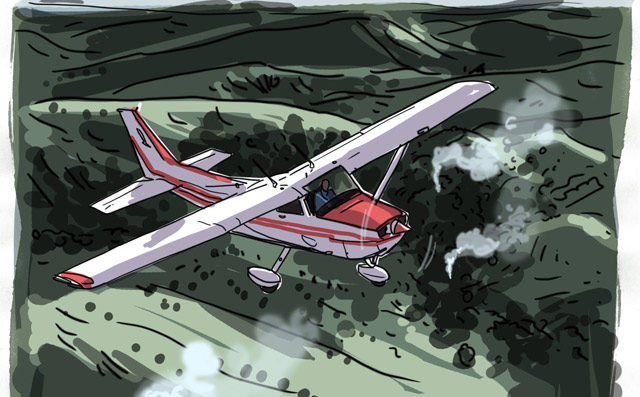 The rugged mountains of East Tennessee are gorgeous, but also isolated and remote in some places. As a student pilot on cross-country flights, I often marveled at the beauty of those hills, especially the wispy fog rising from the valleys on cool days.

On an October morning at our flying club near Knoxville, I did my standard overly thorough preflight inspection on an aging Cessna 172 and launched out to the foothills of the Smoky Mountains on a practice cross-country flight. I spent an uneventful hour tracking VORs and calculating fuel consumption and groundspeeds. The wind was calm, the air was cool, the engine was humming along, and I had a wonderful flight.

I landed back home and wondered if I should top off the fuel tanks before tying down. But the next renter, a friend of mine, walked out to meet me and motioned me toward the tiedown spot. As I shut down the engine, he walked up and opened my door with a cheery, “I’ll fill her up. How’s she flyin’ this mornin’?” (We talk like that in the South.) This is a customary pilot-to-pilot exchange, and the responder is expected to mention any maintenance discrepancies noted during the flight. You’ll make extra points with the other pilot if you add a summary of the weather where you flew, and add details of any good on-airport cafés you have found recently.

Before I could answer, something caught his eye on the underside of the wing, beside his head. Without a word he reached up and buried his entire little finger in a hole in the aluminum skin.

“Was that there before you left?” he asked.

I replied that it most certainly was not. We reached the same conclusion simultaneously—and even said it at the same time: bullet hole. Somebody had shot at me! I had a fleeting image of a steely-eyed fighter pilot (me) hearing the airplane take a round in the wing, seeing where the shot originated on the ground, then rolling into a steep dive and, in this case, opening the window of the 172 and whipping out an M1911 .45 caliber pistol and returning fire. And I might have done that (no, I wouldn’t have. OK, I might have). But I had no idea when the shot had occurred.

On the top skin of the wing, directly above this hole, there was a bump raised up where the bullet lacked enough force to penetrate the second sheet of aluminum. We tried to locate and retrieve the bullet from within the wing (what a great trophy). We extended the flaps and looked through holes stamped into the wing ribs, but we could not locate that lump of lead.

Not sure if anyone should fly an airplane with a bullet rolling around in the wing, my friend and I walked inside the clubhouse to ask the three more senior pilots what they thought. One grizzled old gent walked with us back out to the airplane, examined the wing, and, with a couple of hummms, said the bullet had probably rolled out of the wing.

Astonished, I asked how he could possibly have known that. He answered my question with another question: “Did you see little wisps of smoke down in the valleys of those mountains?”

I said I had seen those quite often.

“Those weren’t barbeque grills, son, they were moonshine stills,” he said. “Those moonshiners saw your airplane, figured you were a federal revenue agent, and took a shot at you! I knew you were between 3,000 and 5,000 feet because if you were lower than 3,000 feet the bullet would have clipped through the entire wing; and if you had been above 5,000 feet nobody with a pistol would have tried to hit you.

“And it was a pistol, a .45 or .357 from the looks of the hole, and the bullet was tumbling when it hit you. See here [pointing to the hole], it isn’t a round hole, more like an oval. And it missed your fuel tank in this wing by less than a foot.”

I had been just mildly intrigued up until the part about a speeding bullet barely missing the fuel tank. Now the mental image of a flaming Cessna ripping into the trees in the middle of nowhere, with me in it, really got my attention. The older pilot said, “Boys, always cross those mountains above 5,000 feet agl. Not everybody around here likes airplanes as much as we do.”

My friend and I talked about this incident with lots of other pilots over the next few years. The best idea on how to avoid future ventilations of Cessnas came from my wife, Cindy, who suggested we put big, black tape letters on the bottom of the fuselages, about two feet across, so people could read them clearly from the ground. They should spell “NOT A FED.”

Lessons learned: Before you fly from a new airport, tell the local guys where you plan to go and get the local scoop on the locations of hazards such as busy airspace and routes, towers, tricky winds, and high-speed lead. Do thorough pre-and post-flight walkarounds and look for anything unusual, such as oil seeping from joints in engine cowlings (something has let go), brake fluid on a tire (bad O-rings on the pistons), fresh bird remains (a bird strike), and one more item that I have added to my own personal checklist—newly arrived, large-caliber bullet holes.

Mack McKinney teaches and speaks professionally on decision making, in aviation and business.