It’s hardly a sweat-inducing event, but sometimes that is the nature of practicing an emergency scenario.

Going beyond the ‘surprise’ throttle close 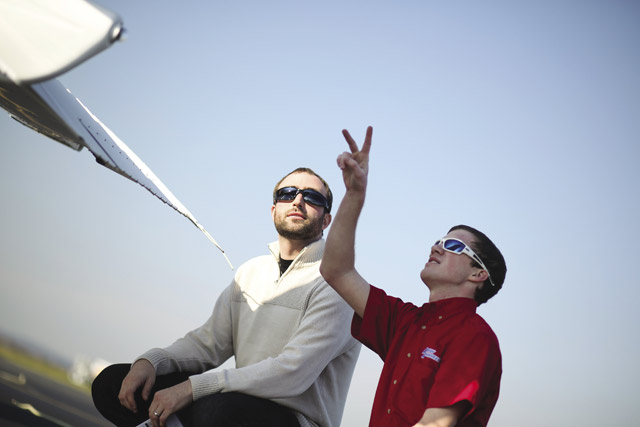 Two miles from the airport on an otherwise uneventful flight review, it happens: Your flight instructor closes the throttle, makes a radio call, and waits to see what you will do. What you do is sigh inwardly, trim for best glide speed, and see if you can make an acceptable approach and landing.

It’s hardly a sweat-inducing event, but sometimes that is the nature of practicing an emergency scenario. It can’t be too realistic, because we don’t want to turn a simulated emergency into a real one. (Just ask the NTSB how those situations turn out.)

Still, there are ways to enhance the emergency training scenario to give it—and you—greater benefit.

“The only engine failure a solo student of mine ever had was a partial engine failure,” said Laboda, who is an FAA Safety Team representative. “In fact, most problems result in partial-power situations. [Pilots] need to recognize that and deal with it, and it can be much more insidious than a complete engine failure.”

Conor Dancy, an instructor with Aviation Adventures in Leesburg, Virginia, said he will briefly click off the alternator side of the airplane’s master switch so that a pilot can see what an alternator failure looks like.

In a simulator, you can muddle through any number of emergency scenarios. “I like to use our simulator to demonstrate what to do with engine failures on takeoff, inadvertent VFR into IMC, and various systems failures,” Dancy said. “I’ll give them vacuum system and electrical system failures, engine failures in various phases of flight, and I will demo why the ‘impossible turn’ is generally a bad idea. I also like to take [pilots] to high altitude airports to demonstrate density altitude.

“Practicing these procedures in a sim is a lot more realistic than practicing in the airplane, because you can surprise the student and not have to worry about safety of flight,” Dancy said. A vacuum failure in the sim also looks more authentic than covering the attitude and heading indicator with Post-It notes, he said.

Speaking of covering the instruments, CFI Dan Namowitz believes that you should practice handling a blocked airspeed indicator on takeoff.

“People feel like they’re at rotation speed, and they look at the airspeed indicator and it’s showing 10, and they get all confused,” said Namowitz, who is a contributing writer for AOPA publications. “Sometimes there’s not enough runway to abort, so they run off the end screeching the tires, but if they stay calm and fly around the pattern using familiar power/pitch combinations, they’re fine.”

Namowitz recalled a flight instructor who would quiz him on various emergency scenarios while they were flying. “What would you do if—the first answer was always to ‘fly the airplane.’”

Just getting yourself into the emergency mindset can help. When flying over inhospitable terrain—or any terrain, for that matter—ask yourself, “Where would I land right now?” This is particularly important if your engine “failures” generally only occur midfield on the downwind leg when there’s no traffic around.

Extend that “what-if” scenario thinking to every phase of flight. For example, if your airplane’s engine were to fail on takeoff, where would you land? Pick a site that will not tempt you to try a low-altitude 180-degree turn.

What would you do if the airplane’s engine caught on fire while on the ground? Robert Riggin, CEO of Flying High Coffee and a CFII, saw this happen to a pilot in another aircraft. “It was interesting and a little harrowing to address the issue—and one that can happen fairly easily by flooding a normally aspirated engine,” he said.

“I was in a running airplane watching another start up,” he said. “Fuel was coming out under the cowl [because of a] cold/flooded start. I shut down, got out, and waved my arms at the pilot.” Too late; “the pilot and passengers then abandoned the airplane and we all ran around looking for an extinguisher,” he said.

That type of emergency is something you can practice for—emergency shutdown, securing the aircraft, and emergency egress, Riggen said. He stressed that an engine fire would be difficult to see from inside the aircraft, so you should have a friend give the signal for fire from outside. Practice just after reviewing the airplane’s flooded start procedure for maximum benefit.

While you’re at it, you could emulate a Part 135 operator’s egress drill, provided your airplane has two doors. Namowitz recalled a supervisor covering the front windows of a Cessna 172 with newspaper so that the pilots couldn’t see outside. To simulate a post-crash scenario, he would bang on the right or left door, and the pilots had to scramble out as quickly as possible.