Get the app Get the app
Already a member? Please login below for an enhanced experience. Not a member? Join today
News & Media P&E Technique

“Simulated electrical fire,” I said. “What are you going to do?”

When a portable becomes primary 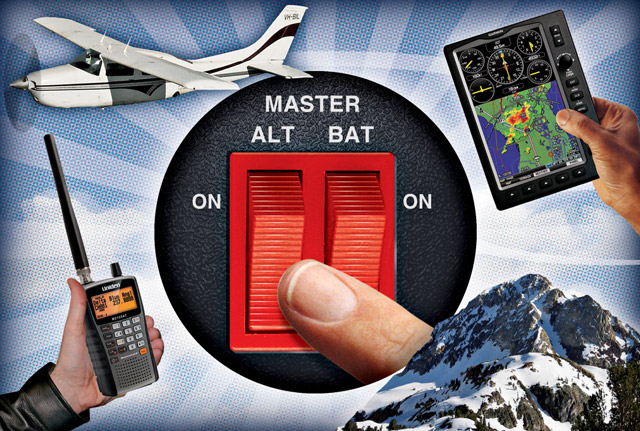 Cessna 210 pilot David Churchill wanted to do more with his regular instrument proficiency check than simply shoot approaches, so we came up with a plan that required him to use the portable GPS and handheld radio he carries as backups—but has never had to rely on it in a pinch.

The scenario we came up with was centered on a simulated electrical fire that required turning off the electrical master switch in flight, and leaving it off. We’d plug in a hand-held radio for communication and use Churchill’s portable Garmin 696 for GPS guidance.

To make our practice session even more demanding, we’d do it over West Virginia, where jagged terrain adds another layer of complexity. As it turned out, there were some surprises for both pilot and instructor.

We began at Greater Cumberland Regional Airport in western Maryland with a localizer approach to Runway 23. Churchill was under the hood and the airplane and its instruments were operating normally. After a missed approach, we entered a hold at the Kessel VOR (ESL), and implemented our scenario.

“Simulated electrical fire,” I said. “What are you going to do?”

Churchill clicked off the big red electrical master switch and, as expected, the panel went dark, the radios and intercom fell silent—and if you’re using a noise-cancelling headset with ship’s power—this is where it gets really noisy. The 696 was plugged into the panel, and it began a 30-second countdown to turn itself off. By simply touching any button, however, Churchill kept it alive on its internal battery. “What next?” I asked, loudly, thanks to the dead intercom.

Churchill reached behind his seat for his flight bag, took out a handheld radio, and connected it to the external antenna attachment on the right side of the instrument panel. Before doing so, he started to engage the autopilot, but quickly realized it wasn’t an option anymore.

With the handheld radio functioning normally (Churchill could hear it, I couldn’t), I asked him to take us to the nearest airport, Grant County (W99). He dialed in the approach frequency so that he could call ATC and ask for vectors to the final approach course, but he needn’t have bothered.

“You’re too low for their radar coverage,” I told him. “And your transponder isn’t working anyway.”

Churchill dialed in the CTAF frequency for Grant County, then he loaded the GPS-C approach on his 696 and switched back and forth between the geo-referenced Chart and Map pages. He hand-flew the airplane using the vacuum attitude indicator and pitot-static altimeter and vertical speed indicator, which operated normally.

He flew to the initial approach fix and had no trouble tracking the final approach course inbound. But there were additional complications. Most obvious, the electrically actuated flaps would have to remain in the Up position, and he’d have to lower the landing gear manually.

With those things situated, Churchill began the approach. But there was one more potential gotcha, a big one. The GPS Map page in the panel configuration contains a digital HSI that gives vertical guidance to traffic pattern altitude, and it was programmed to lead the pilot down on a shallow 500-fpm descent. In this mountainous area, however, that would have led us into a mountainside.

Instead, Churchill ignored the siren song of the HSI and followed the published step-downs on the GPS Chart page.

Flying the actual approach on the portable GPS, even without flaps, was a relatively easy task. We arrived at the published minimums well-positioned for a normal landing.

For me, the takeaways from this flight were: 1) Even when you know a simulated emergency scenario is coming, finding the backup gear and getting it in place and tuned takes practice; 2) EFBs such as the Garmin 696 (or tablet computers) are nothing short of amazing in their ability to provide timely and critical flight safety information; and 3) Ignore the temptation (and habit) of GPS-derived vertical guidance unless you are absolutely positive it will keep you well clear of obstructions.

This flight also showed me that IPCs don’t have to cover the same material every time, and that they can and should be customized for individual pilots. Almost all of us carry portable GPS devices, tablet computers, or handheld radios—and we should practice using the backup gear we might someday rely upon.

Know in advance what capabilities your airplane will lose when the master switch goes off.

Make sure your portable backup equipment is fully charged and within easy reach.

Turn off the avionics master and/or individual instruments before turning the master switch back on again.

Realize that some glass-panel EFIS systems may not be able to initialize in flight.

Understand that a handheld radio transceiver operates much better with an external antenna and headset plug-in.