Mistakes we’ve all made

After thousands of hours of instruction given to new jet pilots, certain patterns in errors and knowledge gaps become apparent. 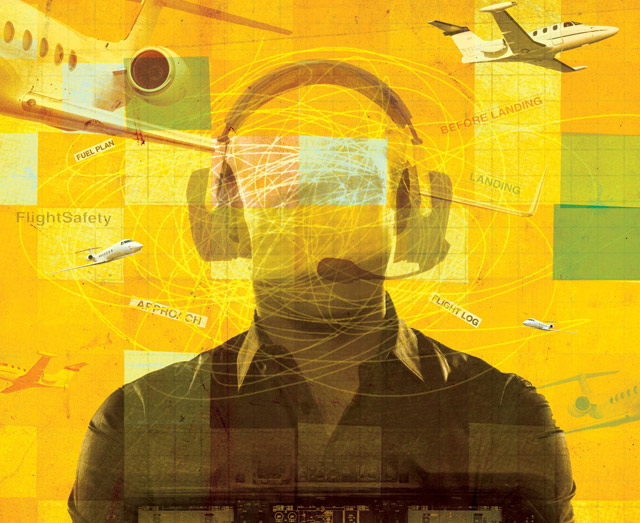 After thousands of hours of instruction given to new jet pilots, certain patterns in errors and knowledge gaps become apparent. Consultation with other designated pilot examiners (DPEs) who conduct mostly jet initial and recurrent checkrides confirms that these errors are widespread, and often are the reasons for checkride busts. I think it’s a valuable exercise for new and experienced pilots alike to carefully consider these “most wanted” items, and ask whether their own flying might have room for improvement in any—or all—areas.

Status bar. Ah, the status bar. Speak with nearly any light jet instructor or examiner, and lack of attention to the status bar inevitably will top their list of pet peeves. The status bar is arguably the second most important piece of real estate on a jet’s primary flight display (PFD), behind only the attitude indicator in importance of scan.

The status bar allows the pilot to confirm what the autoflight system is doing at the current moment, as well as determine what—if anything—it plans to do next, when certain conditions are met. No change to the aircraft’s autoflight system or navigation display should ever be made without immediate confirmation that the status bar exactly reflects the pilot’s expectations. This is the first, and most common, type of error made relative to the status bar—pressing an autopilot button and moving on to another task without consulting the status bar first.

Nearly as common is giving the status bar only a cursory glance and falling prone to the expectation bias, causing the pilot to miss that an annunciation on the status bar is not as it should be.

Checklist discipline. Something that simply should not be a problem for the pilot of a high-performance aircraft too often is applying a disciplined approach to checklists. Often seen with pilots who have spent just enough time in their aircraft to start feeling dangerously confident, two errors are commonly displayed—not using a checklist for all phases of flight, and not actually confirming each checklist item.

Many pilots in a training environment start to get lax after the umpteenth instrument approach, and skip a particular phase of a flight’s checklist. There may be a critical prompt on this checklist—properly setting landings speeds, for example, which change considerably when conducting a normal two-engine approach right after a single-engine practice approach. Every phase of flight requires a checklist every time, no matter how repetitive it may seem.

Profile discipline. Twin to a lack of checklist discipline is poor profile discipline. Whereas checklists should not be performed from memory, profiles need to be hyper-memorized if they are to be properly executed in conjunction with a difficult maneuver.

The worst profile discipline is displayed during maneuvers that are infrequently performed and/or procedurally complex: think engine failures after V1 on takeoff, and go-arounds of both the all-engine and engine-out flavors. The only way to get good at profile recall is relentless drilling—far past the point at which the pilot initially thinks the profile steps are memorized. It’s easier to recall what comes after “gear up” when sitting in an easy chair at home than it is to recall, and execute, the necessary steps in the airplane with associated control inputs, ATC chatter, et cetera.

Profile recall is a highly perishable skill; a pilot who performs a single-engine go-around flawlessly during his type rating checkride often is chagrinned to find himself leaving the gear down, retracting flaps and gear out of order, or misprogramming autoflight modes during the same maneuver just a few months later.

Engine starts. Given that an owner/pilot will be the one writing the check to overhaul an engine should a start go seriously awry, it’s surprising to see the cavalier attitude many display toward the process. Even experienced pilots need to keep a hand on the fuel cutoff control until the start is completely stabilized; too may pilots drop their hand once fuel is introduced, potentially adding a critical second or two should a start abort be needed. Worse is when pilots divert their attention from the engine displays during start. While it’s a natural reflex to acknowledge a line person’s signal that the chocks have been pulled, for example, midway through N2 acceleration is not the time to do so.

Less egregious but more common is the lack of an orderly scan for engine start. Considering all the events that must occur for a proper engine start—adequate fuel pressure and flow, ignition activation, rising oil pressure, acceleration off all engine stages—it is essential to have an organized scan of these critical parameters. The specific method used is far less important than using the same method every time.

Priorities. “Aviate, navigate, communicate” unfortunately has been said so often that it has passed into cliché status, and the fundamental wisdom it speaks is often missed. Too many pilots hurry to read back ATC clearances while letting the fundamental job of maintaining the energy state and vector of the aircraft slip to the back burner. One of my all-time pet peeves is the common omission of activating the autopilot’s approach mode because of the pilot’s focus on perfectly parroting ATC’s approach clearance. After a flawless 10-second-long readback, the pilot happily sits back—only to miss that the aircraft soon will be flying directly through the final approach course.

Go-arounds are another time the ANC hierarchy often is inverted. Changing a low-energy, draggy descent into a maximum-performance climb is no trivial task, yet pilots are too happy to interrupt the aircraft reconfiguration to change frequency and check in with approach control, sometimes before even completely cleaning up the airplane. ATC can wait five more seconds to know you’re going around.

Energy management. Improper energy management can be divided into two categories: letting the aircraft acquire too much energy (usually a problem in the final segments of approach and landing), and letting the aircraft reach an excessively low energy state (never a good idea). Faced with a surplus of energy, pilots are prone to exacerbating the problem by not acting aggressively. Faced with an excess of energy in the form of height and speed, there is simply no good reason to add energy to the system by burning more Jet A than is required to keep the engine at idle.

Likewise, using sources of drag such as speed brakes and flap or gear extension should not be approached reluctantly. Unless faced with a dual engine flame-out, it’s always possible to add energy back into the system if a pilot errs on the side of excessively early energy reduction; the converse is not true, because every airplane has a maximum rate at which energy can be taken out of the system. Too often pilots err toward the wrong side, and cannot safely remedy the situation without a go-around.

The accident records are replete with examples of turbine aircraft, from the lightest single-pilot jets to the heaviest of widebody airliners, coming to fatal ends when energy is allowed to decay excessively. The best step a pilot can take to avoid becoming one of these statistics is to always have in mind a specific speed to fly—and, just as important (if the aircraft’s avionics allow), bug said speed on the PFD. Too many pilots take a “que sera, sera” approach to airspeed management during approach, without having a specific target speed in mind.

Every jet has official guidance published by the manufacturer regarding the minimum acceptable speed for each possible step of gear and flap extension. While these speeds are published as recommendations, they should be treated as hard and fast limits, because they provide protection from stall during maneuvering.

Basic IFR skills. Many pilots of light jets have progressed from their first flight into the left seat of a 450-knot aircraft exclusively behind glass panels. Glass cockpits do an excellent job of automating terminal procedures, and the proliferation of RNAV approaches means many pilots haven’t had to manually think through a procedure turn or hold entry since initial IFR training (if ever). Yet things can and do go wrong with automation, GPS signals can be blocked, and GPS receivers do fail.

Faced with flying a full VOR approach with procedure turn and missed approach solely in “green needles,” many pilots—especially those who have come through the ranks exclusively in glass-cockpit aircraft—cannot maintain a safe level of situational awareness. A pilot must be confident of his ability to properly complete an approach with impaired automation. As with profiles, there is no shortcut to IFR mastery; a pilot must have the discipline to regularly practice difficult approaches with reduced levels of automation.

Lazy feet. A minor but common error relates to flying twin-engine aircraft in a simulated one-engine-inoperative (OEI) configuration. When flying OEI, any change in speed or thrust will necessitate a change in rudder input: more speed equals less rudder, more thrust equals more rudder. Many simulator-trained pilots have never flown their real-life airplane with one engine at idle, and do not properly adjust rudder force and trim with speed and thrust changes. Unless combined with a dangerous speed decay, this error is not likely in and of itself to cause any serious harm, but sliding sideways in the seat as thrust in brought up and down without adequate rudder correction does make for a grumpy instructor.

VNAV. If there is one element of automation that is the most poorly understood by new and experienced jet pilots alike, it likely is vertical navigation (VNAV). Even pilots who have all the proper “book knowledge” of their VNAV system often do not trust that the system won’t surprise them in actual use.

VNAV in modern light jets is a straightforward system, with only a handful of rules that govern all the possible situations one could experience. As “climb via” and “descend via” procedures proliferate, it will become more important that pilots are comfortable with VNAV and its interface with their aircraft’s automation. A short training session in a simulator or aircraft usually is enough for pilots to understand that the VNAV system isn’t so mysterious, after all.

No flow. Flow patterns are generally misunderstood and underutilized by pilots. It’s important to understand that a flow pattern is not a vague “flow” of attention across the cockpit. Rather, it is a specific sequence of specific steps that are committed to memory. After engine start, for example, most jets have between a half dozen and dozen steps to be taken—setting flaps, testing trim, et cetera—before taxi can be commenced.

Many pilots step through these required actions by consulting their checklist line by line turning the checklist into a “to-do” list. Rather, if the pilot has a flow memorized, the flow is performed first, all at once, and then the checklist is run as a true checklist.

If the checklist is used as a to-do list, there will only be once chance to catch a critical item, such as the flight control check. If the flight controls are checked as part of the after-start flow, and the “flight controls free and correct” line of the after-start checklist later is read and confirmed, the pilot has greatly decreased the chance that item will be overlooked. As icing on the cake, it’s a lot faster to do a flow check, followed by a read-through of the checklist, than it is to divert attention back and forth between checklist and cockpit, using the to-do list method. Mastering the techniques that will avoid these common errors will take the apprehension out of your next turbojet checkride—and make you a better pilot for every flight.

Neil singer is a Master CFI and jet mentor with more than 8,400 flight hours.