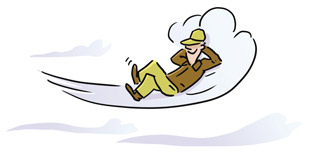 1. Arrange the following airplanes in order of their length, longest first and shortest last.

2. Why did all trans-Atlantic air service terminate in May 1937?

3.  From reader Paul Reinman: What well-known production airplane never flew out of or into the U.S. airport at which it was manufactured?

4. The expression “he or she is on cloud nine” describes a feeling of elation and joy. What is the meteorological origin of this expression?

5. From reader John Schmidt: During a parade on August 7, 1919, along the Champs-Élysées that celebrated the end of World War I, French pilots were ordered to join the infantry and participate on foot. This provoked the pilots, who considered themselves “heroes of the air.” What did pilot Charles Godefroy do in protest?

6. A pilot is performing an on-pylon (not an around-pylon) turn and notices that the pylon is moving behind the wing tip. He should

a. climb and increase airspeed.

b. climb and decrease airspeed.

7. From reader Ed Drury: What is believed to have been the first diesel-powered airplane in the United States?