Get the app Get the app
AOPA will be closed July 4th, in observance of the Independence Day holiday. We will reopen at 8:30 am ET on Tuesday, July 5.
News & Media Pilot Briefing: Fly-Ins 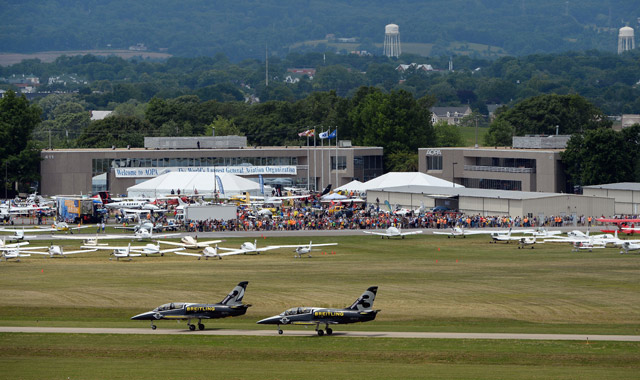 A steady breeze and partly sunny skies greeted more than 3,300 attendees and 375 aircraft at AOPA’s Homecoming Fly-In celebration June 5 and 6 in Frederick, Maryland. Children danced in the flight display area while the Flying Musicians Association band jammed to Jimmy Buffett’s Margaritaville; parents, meanwhile, eyed dozens of aircraft on display ranging from the experimental Bearhawk to Cirrus Aircraft to Textron’s Cessna and Beechcraft lines. 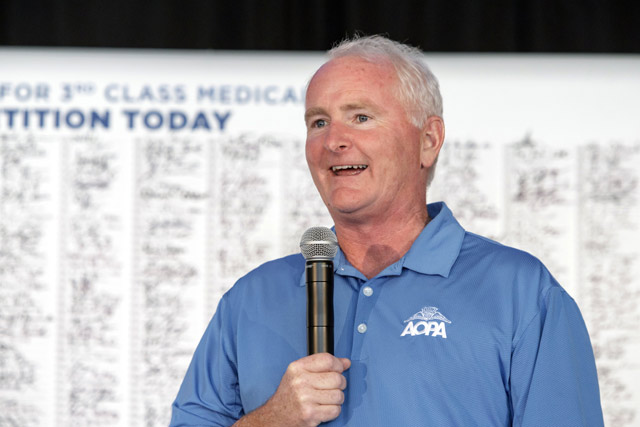 The AOPA Fly-In on August 22 at Anoka County-Blaine Airport (ANE) will be like coming home again for AOPA President Mark Baker.

Baker learned to fly there while he was a student at the University of Minnesota, and he still has a hangar there. The bustling general aviation airport is home to flight schools, museums, vintage aircraft, warbird restorers, and corporate jets.

Join us in the land of 10,000 lakes for a fly-in that will delight every pilot and aviation enthusiast. Anoka County-Blaine Airport is in a suburb of Minneapolis, on the banks of the Mississippi and Minnesota rivers. This will be the first AOPA Fly-In where seaplanes will be featured. Join us for barbeque at the Barnstormers Party on Friday at the nearby seaplane base at Surfside, camp under the stars, and enjoy all the educational seminars and exhibits that are the highlight of our fly-ins.

Baker will be on hand for his fly-in Pilot Town Hall on Saturday where he will update members on work being done to pass the Pilot’s Bill of Rights 2, third class medical reform, and other association initiatives. An ice cream social sponsored by Sporty’s Pilot Shop follows the town hall.

AOPA’s next Fly-In is August 22 at Anoka County-Blaine Airport in Minnesota.

Natural adventure at Surfside Seaplane Base 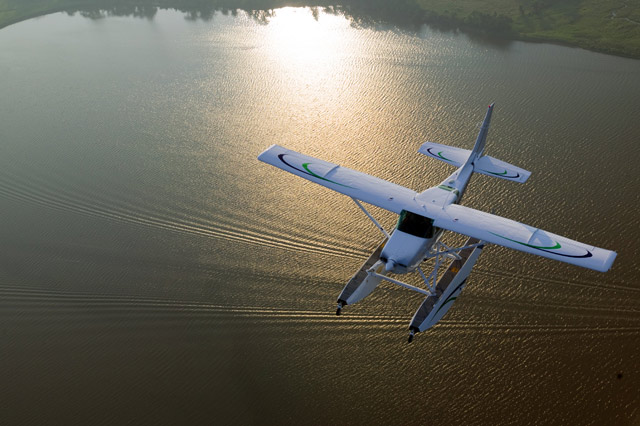 Bruce Hanson, owner of the Surfside Seaplane Base, locks his gaze on the black-and-white forms bounding across his desktop computer monitor.

The fuzzy images piped in from a remote webcam show fuzzy creatures—17 of them. A wood duck hen and her recently hatched brood fill one of the 30 duck boxes Hanson has placed in trees around Surfside. And the webcam shows the youngsters are almost ready to make their first “flight.” In their case, it’s a nearly 50-foot plunge from the box near Hanson’s residence to nearby Rice Lake.

“They’re just about ready to make their leap,” said Hanson, 83, who bought the seaplane base with several partners in 1970. “You’ll see them fall right by this window.”

Hanson has helped build the 30-acre seaplane base just five air miles from Anoka County-Blaine Airport into the second busiest seaplane base in the continental United States. About 50 seaplanes are based here, and pilots come from all over the world to fly here. It’s a stopping-off point for floatplane pilots flying up or down the Mississippi River, and it’s a jumping- off point for flights to and from Canada. There’s a 1,800-foot turf runway at Seaside in addition to the water landing area.

“I’ve always been drawn to this type of flying for the adventure of it,” said Hanson, who shares his home and office with wife Joanne. “When you’re in a floatplane, you’ve got unlimited runways. You can always land into the wind. And you get to go where the fishing is good.”

Visiting airplanes are likely to include everything from ultralights on floats to de Havilland DHC–2 Beavers, Staggerwings, and even hulking Grumman Albatrosses—several of which are based at Anoka County-Blaine Airport.

“When an Albatross goes by, it fills my entire [dining room] window,” Hanson said.

Brian Schanche, owner of Adventure Seaplanes, provides floatplane rides to pilots (and their families and friends) who want to learn about adding seaplane ratings to their pilot certificates.

The Surfside Seaplane Base is usually a tranquil and bucolic, but Hanson said he expects it to be a hub of activity during the AOPA Fly-In. “We’re bracing ourselves,” he said. “We’ll be ready for anything.”

And watch for wood ducks. Even the young ones will be flying in late August.

The most-anticipated arrival of the day, the Breitling Jet Team, brought attendees in droves to the flight line in front of AOPA’s headquarters, searching for an early sighting of the civilian L–39 jet team. The French pilots wowed spectators with multiple formation passes. Aerobatic star Michael Goulian followed with a high-impact aerial demonstration.

Pilots got down to business with AOPA President Mark Baker during a Pilot Town Hall, in which he talked about the association’s ongoing effort on third class medical reform. “So we’ve all signed the petition, right?” Baker asked attendees, referring to the large petition AOPA takes to all of the regional fly-ins and major aviation events. Baker acknowledged that “it’s taking a really long time to educate” officials and encouraged members to continue contacting their elected leaders. “We’re going to stay on this thing every day, every week,” Baker pledged.

See the fun in Frederick in this online video.