Get the app Get the app
AOPA Members DO more LEARN more SAVE more - Get MORE out of being a pilot - CLICK HERE
News & Media Pilot Briefing: People

His other airplane is a Cheetah 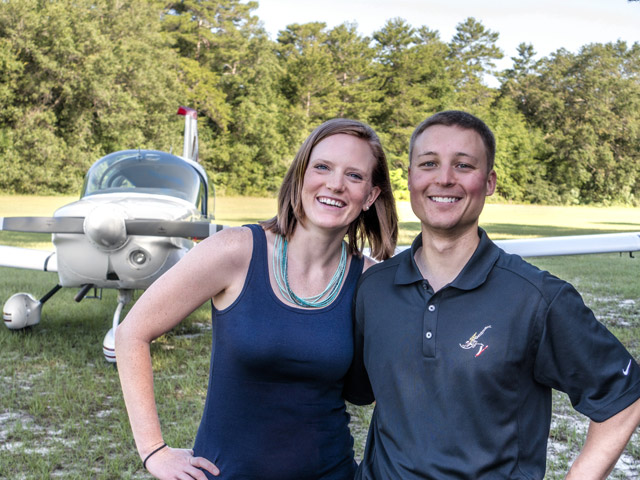 Why would a naval fighter pilot want to slow from 1,000 knots at his day job to 105 knots on weekends? There are several reasons. He can bring his wife along, for one thing. Katie and Lt. Joe Campbell co-own a 1978 Gulfstream American Cheetah that allows them to tour Florida after Joe was assigned to Eglin Air Force Base in Fort Walton Beach.

“He hates driving so I don’t think we’d ever be able to go see [the state] if we didn’t fly there,” Katie said. Joe is the transition-phase head for pilots learning to fly the single-seat Lockheed Martin F–35 Joint Strike Fighter at the VFA-101 “Grim Reapers” squadron, the name given it by pilots in 1942.

“The runways you can access in a small airplane are much easier. You don’t have to have 8,000 feet of runway. You can take off from a little grass strip,” Joe added. He launches his hamburger searches from a grass strip in Niceville, Florida.

Katie discovered she loves flying in small aircraft. “It’s completely new to me. Before Joe and I bought this airplane I had never been in general aviation at all. I just like being able to fly with Joe and get up and go somewhere.” She works from home for a radiology group doing physician licensing and credentialing.

While Katie was new to GA, Joe had been raised in airplanes since childhood. “I’m from Cleveland. My grandfather owned Bonanzas and restored a warbird. When I was a kid I flew with him. I got my pilot’s license when I was 18. I found out I got an appointment to the Naval Academy so all the money we had saved for college was used for my pilot’s license.

“I didn’t get to fly very much when I was at the Naval Academy. When I was in my first fleet squadron—I flew F–18s prior to this—I had gotten married. My wife had never flown in a small airplane, so I rented a Cessna. It was very expensive, $130 an hour plus renting headsets, and it was always $200 every time I went. I did that a few times. She liked it, so that was a sign that I picked a good wife. When I came on my shore tour I said I will buy an airplane.”

Now he has a 150-horsepower Cheetah costing about the same as a new car, and a 40,000-pound-thrust F–35 fighter for the day job costing $149.3 million. (It comes with a helmet costing more than $500,000 that allows the pilot to see through the walls of the aircraft using external cameras.) What would he do if he won the lottery? “Buy more airplanes,” Katie said.

Twelve years ago Capt. Stephan Lanfermeijer watched the groundspeed of his Boeing 737-800 airliner climb past 600 knots. The London charter pilot asked colleagues if that might be some sort of record. But what sort?

That’s when he started Ground Speed Records (groundspeedrecords.com). It’s where pilots can say, “Here’s a picture of my airspeed indicator, see if you can beat it.” If no one can, you have a record. He’s had some interesting ones recorded.

“The record entries that stand out in my mind are obviously the fast ones with Concorde being fastest with 1,205 knots followed by military jet aircraft. I enjoy the records of vintage aircraft (like the B–17 Sally B or B–25 and Constellation) and generally aircraft that are less common. Brand-new airliners like the A380 and B787 always make a nice impression once they start to appear,” he said in an e-mail interview. “I am still waiting for the first Russian entry.”

Currently featured on the website are a humble Rockwell Commander 112 that recorded 230 knots of groundspeed; a diesel-powered Diamond DA42 Twin Star two-engine aircraft that went 208 knots; and a Beechcraft King Air 90—smallest of the King Air fleet—that went 388 knots one windy day. There are anti-speed records as well. A Socata TBM 900, among the world’s fastest single-engine turboprops, faced a 70-knot headwind above Muncie, Indiana, December 3, 2014, during slow-flight practice and saw a groundspeed of 11 knots. —Alton K. Marsh