Get the app Get the app
AOPA Members DO more LEARN more SAVE more - Get MORE out of being a pilot - CLICK HERE
News & Media Letters: From our June 2015 issue

Not one thing can be done

Wow! We received a tremendous number of responses to Tom Haines’ editorial on the problems with solving the declining pilot population. 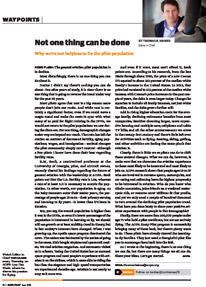 Wow! We received a tremendous number of responses to Tom Haines’ editorial on the problems with solving the declining pilot population.

Tom Haines’ editorial “Waypoints: Not One Thing Can Be Done,” raises the crucial issue of the general aviation pilot population, and makes a number of important points.

First, I am heartened to learn that AOPA is looking at the pilot population systematically by listening to people like E.M. Beck. The GA community needs to understand the demographic and cultural shifts of the U.S. population in order to understand and plan how to maximize the sustainability of the population.

Haines is on point about appealing to young people who are interested in extreme sports and similar activities. Many oldsters think that young people today are couch-potato slackers with their heads buried in their smartphones (many are), but the videos on YouTube show young people who work at perfecting difficult physical movement. And I suspect that there are more young people who would enjoy the physical activity of flying if it were made relevant to them. My suggestions:

1. Promote personal GA for recreation more than for practical transportation. Cars and, yes, even airlines, provide practical alternatives for getting people and stuff from one place to another. But only light airplanes can provide the freedom, sensation, and challenge of flying. The GA industry should actively market flying as a cool and exciting recreational experience, in ways that appeal to young people and adventurous people of all ages.

2. Provide affordable access to flying and emphasize the flying experience over aircraft ownership. The concept of flying clubs points in this direction; it could be pushed harder.

4. Lobby effectively for more efficient and less costly certification processes in the FAA. Everyone blames the FAA for the high cost of airplanes today. AOPA, GAMA, and other interested organizations need to push hard in this direction.

There are certainly many “one things” that need to be done to save personal GA. Returning the fun and affordability to flying will help make it possible.

Cost is a factor since flying competes for people’s discretionary dollars. However, when I see what people spend on things like Starbucks coffee, cellphones, and status automobiles, I can’t help but think that there is discretionary money available within a certain percentage of the population.

People attracted to passive activities are not our audience; people who participate in sports, even non-extreme sports, are the audience for recruiting new pilots. These people get off their chairs and do things. They seek out real experiences. And what experience is more real or satisfying than being pilot in command?

Ouch! NASA does not always do the best job of publicizing its accomplishments, but it is assumed within the agency that the general public is aware that the United States has a manned (and women) space program. The assertion in your Waypoints article that, “Today, the United States has no manned space program,” indicates NASA is is failing to inform the general public that NASA is spending billions of dollars every year for U.S. astronauts to perform science missions aboard the International Space Station.

True, the Space Shuttle has been decommissioned and NASA relies on other nations for launch services, but the U.S. manned space program continues to make discoveries in physical and bio-science that improve the lives of people on Earth. There continue to be space travel opportunities for capable adventurous individuals.

The primary barrier for missions to more distant destinations like the moon and Mars is sufficient public interest and the will to fund these missions.

From 1972 to 1997, the average middle-class American lost 75 percent of their disposable income. That is huge when it comes to the decision of airplane versus bass boat or golf membership. The general population has been essentially isolated from general aviation since 9/11. Most GA airports are surrounded by chain link fences with security gates. Commercial airports are even worse. If you stand outside the fence watching airplanes land and take off, you may be accosted and questioned by security personnel. This November will mark 50 years since my first flying lesson as a college student. Sad to say, I believe the wonderful aviation years of the 1960s and ’70s will never be repeated.

“Henry Ford’s genius came from the fact that he invented a way to make automobile ownership affordable to middle-class Americans, through lowering the cost producing the cars coupled with high wages for his employees. Aircraft and avionics manufacturers (indeed, the whole GAMA) should take a page out of Henry Ford’s book!”

“I think it’s broken, Mr. Haines. The cost of aviation fuel has not followed the downward trend of other petroleum products and that makes flight instruction much too expensive for the average human. The ongoing/upcoming/soon-to-be pilot shortage will not be solved by mom and pop flight schools; I think the airlines are going to need their own pipelines. With the increased requirement to 1,500 hours to sit in the right seat of an airliner, that makes this an interesting time.”

I have just come back from Israel and read Barry Schiff’s “Proficient Pilot: Big Trouble.” Sadly, he is correct. The demise of general aviation hits Israel same as in the United States. People there simply do not care or understand the concept and importance of GA.

I fondly remember the day I flew with a friend in a rented Cessna 172 from Herzelia to Jerusalem, circled Massada, continued and landed in Rosh Pina near the Sea of Galilee, and ended back in Herzelia. These days in Israel are gone with the wind. Same as what happened in California to little Santa Susana airport. Now it is a long, straight street called Airport Drive.

I was disturbed by the closing sentence in Schiff’s article. I share his concern that governments are discounting the value that GA brings as they allow airport closures and associated pilot development activities in favor of what appears to be more lucrative development. However, unless I missed a large dose of sarcasm, to say “that such a thing never could happen here” is ludicrous. It has happened, is happening, and will continue to happen unless something turns around.

Barry Schiff responds: It was meant to be facetious because such things obviously are happening here. I suppose that I should have written it in a way to make the sarcasm more obvious.

How old were you on your first flight as pilot in command?