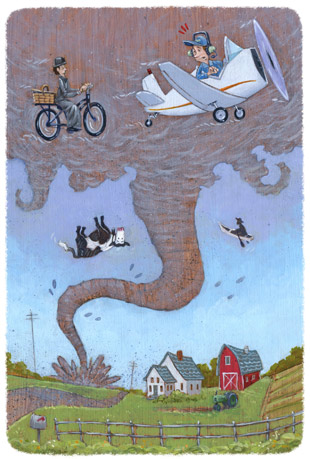 2. A pilot knows the maximum cruise speed and climb performance of his airplane when flown at its maximum gross weight. He is curious to know, however, how this performance would be affected if the gross weight were to be increased by 25 percent. How can he determine this during flight without actually overloading the airplane?

3. What was the largest, heaviest, most-powerful, piston-engine airplane ever produced?

5. True or false? Each of two major U.S. airlines have had well-publicized, major accidents involving the same type of jetliner on the same day.

6. Tornadoes are born in the bellies of thunderstorms and most often are found in the _______ portion of such storms.

7. A most inspiring radio report was transmitted by a World War II liaison pilot on February 23, 1945. He transmitted matter-of-factly, “Target Area One Three Two Peter. One flag. Red, white, and blue.” Where was this target area?

8. What is an airspeed bomb?

1. Capt. Eric “Winkle” Brown, 96, was in Britain’s Royal Navy, was a test pilot, and holds a number of other remarkable records in naval aviation (such as being first to land a jet on an aircraft carrier).

2. The pilot simply notes the cruise and climb performance while stabilized in a 37-degree banked turn. At such a time, the aircraft experiences a 1.25-g load factor and effectively weighs 25 percent more than when in level flight. Using this procedure (establishing the bank angle resulting in the desired load factor), you can determine climb and cruise performance during any overweight condition (within reason).

3. The Convair B–36A, B, and C models of the Peacemaker had six 3,500-horsepower R4360 Pratt & Whitney engines and a maximum takeoff weight of 370,000 pounds. Later models were supplemented with four J47 General Electric turbojet engines and takeoff weight was increased to 410,000 pounds. The B–36 was then said to have “six turnin’ and four burnin.’”

4. 2340 UTC. The time of sunset (or sunrise) at the same latitude changes one hour for each 15-degree change of longitude (24 hours equal 360 degrees) Ten degrees, therefore, represent 40 minutes of time. Because an easterly flight shortens the day, sunset occurs 40 minutes earlier.

6. (c) As a possible visual aid in determining the safest direction of thunderstorm circumnavigation, consider that tornadoes typically descend from a rotating wall cloud that often forms the lowest portion of the thunderstorm cloud base.

7. Target Area TA132P was Mount Suribachi on Iwo Jima. The famous image of this American flag being raised was the most reproduced photograph of World War II.

8. An airspeed bomb is a pitot-static source that trails via a long tube below a test aircraft. It moves through the undisturbed air well beneath the aircraft to determine the accuracy of the installed airspeed indicator.