Get the app Get the app
AOPA Members DO more LEARN more SAVE more - Get MORE out of being a pilot - CLICK HERE
News & Media Never Again: Speaking up

Storms and an overconfident right-seater

I was influenced by the senior pilot to my right, who I believed had experience in dealing with decisions like this. 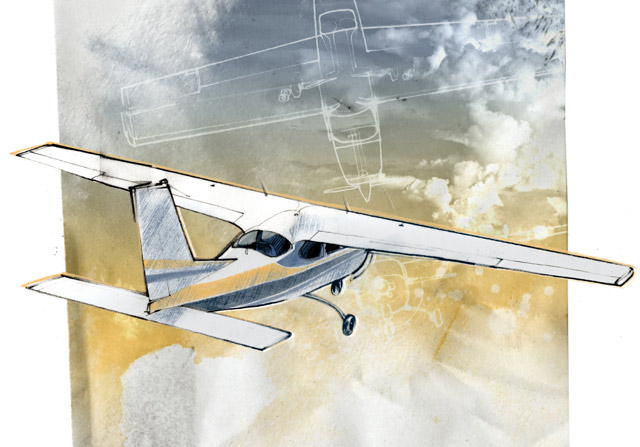 As a new pilot, I joined the local flying club where I had access to a meticulously maintained Cessna 177, and I found great camaraderie and mentorship among the members. I flew with many fellow members during my time with the club, including one pilot who joined several months after me.

“John” had recently moved to the area and was already an experienced pilot. Like me, John was not yet instrument-rated, and though I didn’t know his actual experience, he gave me the impression that he had much more flying experience than I did. He was about 10 years my senior and had a responsible job. As a graduate student I was in a different stage of life. John exuded confidence; I looked up to him as a person and as a pilot.

One day John invited me to join him on a trip to attend an airshow at a city on the other side of the state (a two-hour flight)—my first cross-country with him. Our girlfriends came along, and although they had never met, both had significant experience as right-seat flyers, and they got along well. We agreed that John would be the flying pilot on the way there, and I on the way home.

The flight out was uneventful, and we enjoyed the airshow. Toward the end of the day I became increasingly worried about the weather, as a line of thunderstorms was approaching the state. I was surprised that John didn’t appear worried about this at all, and I felt amateurish for raising the issue in the face of his self-confidence.

During the preflight for the return, the weather showed a line of thunderstorms approaching right into our route. We decided to divert our course to a commercial airport with a full-service FBO where we could wait out the storm if the weather required. We engaged VFR flight following (my normal routine), and about 60 miles from our intermediate destination ATC warned us of the approaching storm line.

I suggested diverting to some nearby small airports, but John pressed to carry on. I was influenced by the senior pilot to my right, who I believed had experience in dealing with decisions like this. Yet I was very apprehensive; as pilot in command, I found myself in the midst of a flight that I would not have normally have decided to initiate. When I voiced my concerns, John responded with comments like “We are fine—this is how it’s done.” We had no cockpit weather information, so we were relying on our eyes and ATC. As conditions worsened, I insisted that we land at a small airport 10 miles short of our planned stop. John reluctantly agreed and did not hide his disapproval.

Once we landed, things got worse. We found the FBO closed, not a soul on the field, no outside telephone for a briefing (this was before cellphones), and no shelter. So John pushed to take off and beat the storm to the large airport, just 10 miles away. Feeling overcautious, I let John convince me. All four of us climbed back in the airplane, and as the flying pilot I taxied and took off, heading straight toward the dark sky. The cockpit was silent. John was angry that I had insisted on stopping; the ladies were scared to death (I later learned they had been clenching hands); and I was focused on controlling the 177 in what was the roughest climbout I’ve ever experienced.

As soon as we were about 500 feet above ground level I could see a black cloud over our destination. A sudden wave of insight came over me as I realized I had made the wrong decision. With new confidence I announced to John that we would stay in the pattern and return to land. He argued, but I wasn’t flexible anymore. The trip around the pattern was jolting, and the final approach was a fight. I was flustered and conducted the worst landing I have ever made. But we all walked away safely and sat through one of the most severe thunderstorms I’ve seen.

After the storm passed, our flight home was calm and beautiful. It was the last time I ever flew with John. I now knew that he was one of those pilots you read about, with a lack of respect for the true importance of caution. I regretted my decision to initiate the return flight with John, and I knew that as PIC it was ultimately my responsibility. But I had not yet learned my second lesson: It never occurred to me to report the incident to the flying club. I followed the lead of someone I perceived as a more experienced pilot, assuming that his experience correlated with better judgment. It could have ended very differently. Although I made the personal decision never to fly with John again, I didn’t have the confidence to be sure he was wrong; I wondered if my apprehension was simply caused by my inexperience.

About a year after that flight, I took some friends on a flight for lunch. It was a beautiful flying day with clear skies, calm wind, and great visibility. It was my last time in the 177 before I moved out of town. The flying club later called because the next pilot to take the 177 out discovered a subtle rippling of the wings during his preflight, only noticeable when the line of vision was placed right along the top of the wing. It was estimated that the aircraft had undergone several Gs of force consistent with thunderstorm-related turbulence. The 177 was totaled. Our flight had been smooth, so I had missed the damage on my preflight. I learned that the last person to fly the aircraft before me was John, and at that point I told the story that I should have told months earlier.

John soon resigned from the flying club. We know the airplane had been flown past its structural limits. The irony here is that by remaining silent about my concerns with John, I may have put myself and my passengers at risk a second time, despite my decision never to fly with him again. Second lesson learned.

Rollin J. “Terry” Fairbanks is an emergency physician and director of MedStar Health’s National Center for Human Factors in Healthcare and MedStar SiTEL in Washington, D.C.