Get the app Get the app
AOPA will be closed July 4th, in observance of the Independence Day holiday. We will reopen at 8:30 am ET on Tuesday, July 5.
News & Media NASA tests ELTs

Not all pass with flying colors

Tightly spaced black dots against a white background is the livery of doom for aircraft at NASA’s Langley Research Center, but a paint scheme that could help make the rest of us safer in the end.

A research team at the aeronautical research facility in Hampton, Virginia, is busy analyzing the results of a recent 82-foot drop test involving a 1958 Cessna Skyhawk sacrificed for science, and four emergency locator transmitters purchased off the shelf.

Interestingly, not all of them activated within 50 seconds (the design specification) after the Cessna 172 plunged at 72 feet per second onto a concrete pad, the first in a series of planned tests—this one designed to simulate a controlled emergency landing on a hard surface.

NASA reported that the three stragglers did trigger “a short time later,” and the team will take some time to figure out why three of the four took a little extra time. (Note to self: a compelling reason to activate during descent, if able when comes to that.)

The setup for the test was much the same as in drop tests conducted in 2013 and 2014 involving CH-46 helicopters chock full of sensors and crash test dummies, painted in that same polka dot scheme that enhances analysis of images captured by high-speed cameras. Elastic deformation of the fuselage during impact can be studied in detail at leisure through a technique knowns as photogrammetry. 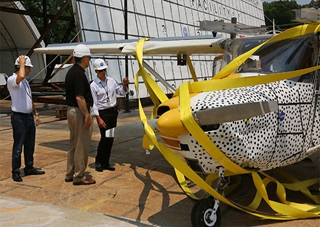 "What we found was we needed to study ELTs at the component level first to better understand why the systems fail," Stimson said. “Too often they fail to work as expected, in part, because of inadequate performance specifications in several areas including vibration, fire survivability, automatic activation, crash safety and system installation.”

NASA chose the Cessna 172 because it is the most common general aviation airframe, though there is no evidence that ELT performance is affected by differences between aircraft. The aeronautics and space agency also made a point to celebrate its work on behalf of general aviation, which is not always headline-grabbing. The mission is nonetheless taken to heart, according to Lisa Mazzuca, NASA Search and Rescue mission manager.

"There needs to be a technical arm that typically works in the background to allow search and rescue forces to affect rescues using satellite-based technology,” Mazzuca said. “NASA's here to innovate that technology, which will ultimately improve the probability of a successful rescue."

The recent and future drop tests could help refine the placement and other installation details for future ELTs in GA aircraft, NASA noted.

A number of factors impact the effectiveness of an ELT in the event of a forced landing, but pilots can better their odds of being found quickly by carrying survival equipment and following guidance in the Air Safety Institute's Survive: Beyond the Forced Landing. The institute recommends pilots not rely on an ELT as their main emergency signal and carry a communication device such as personal locator beacon, radio, or cellphone in their survival vest as well as a signaling device to help reduce the time it takes to be found.