Get the app Get the app
AOPA Members DO more LEARN more SAVE more - Get MORE out of being a pilot - CLICK HERE
News & Media Pilots: Free Spirit

Nothing stands in her way

Nothing stands in her way 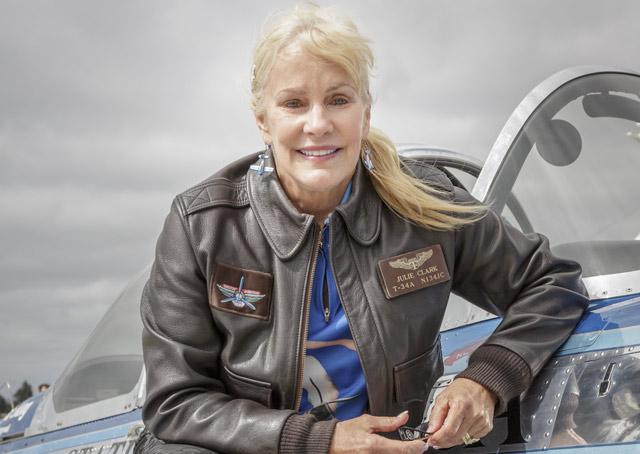 To describe Julie Clark as enthusiastic would be akin to describing the sky as blue or the sun as hot. This is one energetic woman, passionate pilot, and intense patriot. After all, she flies a painstakingly restored red, white, and blue 1949 Beech T–34 Mentor in an airshow routine that features music such as God Bless the USA and, at the conclusion of her performance, jumps—leaps—from her aircraft to meet fans with such power that it belies her 67 years. She’s been flying airshow routines for more than 36 years and is rated in 66 different aircraft. And she has wanted to do exactly what she’s doing since she was 8 years old. “While most little girls were playing with dolls, I was building models of airplanes and reading all I could about flying,” she says.

Her father was the chief pilot for Pacific Airlines in the 1960s, and Clark idolized him and his career. “I thought that was the greatest thing when I could go fly with my dad,” Clark says. Tragically, in 1964, Capt. Ernie Clark was filling in for another pilot on a flight from Reno, Nevada, to Oakland, California, when a passenger entered the unlocked cockpit and killed both Clark and his first officer. The aircraft crashed, killing everyone on board. Cockpit doors have since been locked during commercial flights under the “Clark Act.”

The loss of her father (and her mother a year earlier in an accident) did not deter the aspiring pilot. She spent her college book money on flying lessons. She was the first woman to fly for Golden West Airlines and eventually became a captain for Northwest Airlines in 1984. She retired in 2004.

She bought her T–34 in 1977 “sight unseen” and spent four years restoring the aluminum airplane, hand-polishing it inside and out. It is painted her whimsical version of “Air Force One” and dubbed Free Spirit. A former instructor in the T–34 for the U.S. Navy, Clark is the only airshow performer in the aircraft in the United States. Although the T–34 was a trainer for the U.S. Navy and Air Force, it demands tremendous skill to fly aerobatics. “In the T–34, inverted flight must be carefully calculated because it does not have an inverted oil or fuel system,” Clark says.

Clark wrote a memoir in 2004, Nothing Stood in Her Way, published by Women in Aviation International, and calls it a “tell-all” book about her life. “I talk to my dad when I’m getting ready to perform. I say, OK, Dad, don’t let me do nuttin’ dumb.”