Get the app Get the app
Already a member? Please login below for an enhanced experience. Not a member? Join today
News & Media Inside WARP radar 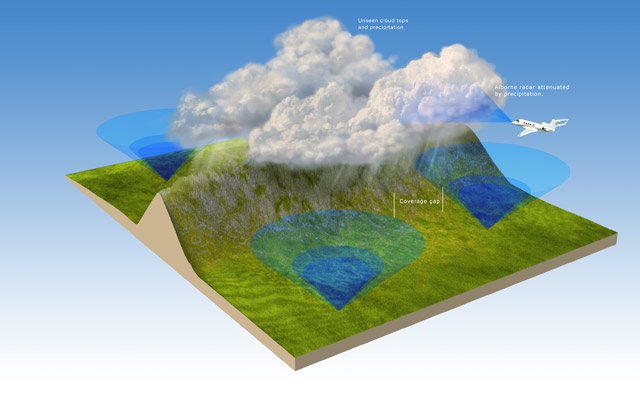 Airborne weather radar can’t penetrate areas of heaviest precipitation, so the pilot doesn’t receive a complete view of the weather ahead. Similarily, ground-based Nexrad weather radar has its own limitations. Like airborne weather radar, it can’t identify cloud tops, or cloud types. Nexrad sites in remote areas don’t have dense coverage areas, so meteorologists have to fill in the gaps by creating a best guess as to the weather between them. -Illustration by Charles Floyd

U. S. ARTCC (Center) controllers utilize a system known as Weather and Radar Processor (WARP). The input for WARP is from the ground-based Nexrad system and, although the system has a very robust update capability, it is still prone to some significant limitations. In order to understand these limitations, a brief review of key Nexrad limitations is necessary.

Individual Nexrad sites are programmed with a specific “profile” called a Volume Coverage Pattern, or VCP. The VCP controls certain technical parameters of interest to meteorologists, including the number and elevation of the individual scans in the selected profile. From these scans, two common products are available: The Base Scan, which is the result of the lowest scan angle, and the Composite (or Volume) Scan, which is a collection of the highest reflectivity of all the scan angles. Data from the Base Scan can be rapidly disseminated to users and vendors, but the Nexrad antenna bound by the speed of physics still has more work to do; it continues onward and upward until the profile is complete.

The time it takes to do this translates to latency. This latency affects the accuracy with which rapidly changing weather is displayed (height, intensity, and the displayed location). But an additional detail must be considered: the geographic location of the Nexrad sites.

Draw a line from approximately Minneapolis to Midland, Texas. East of that line, Nexrad is a robust system with redundant coverage. Any weather in this area will normally have more than one Nexrad site scanning it. That data is fed into WARP, providing for a fairly robust update rate. Even if an individual site is offline, adjacent sites will likely be scanning a given weather target.

However, to the west of that line it can be a very different story. With the exception of the extreme West Coast, single sites are tasked with scanning vast geographic areas with little or no redundant scanning by adjacent sites. Here, latency will be directly correlated to the VCP of that site. For context, the VCPs commonly used in a convective weather environment take approximately four to six minutes to complete. Sounds fast, but consider a cell growing at 5,000 feet per minute or a line of fast-moving weather; latency can be significant. And if a site is down, it could mean the majority of a state does not have coverage. During preflight planning, a quick glance of the operational status of individual Nexrad sites, available via the web, is a good idea.

In some locations west of this line, large geographic gaps exist where there is no coverage at all. When hazardous weather is located in these areas, pilots requesting deviations for weather should anticipate that the controller, viewing WARP, won’t see it. There are numerous such regions in the West (the Dakotas, the Four Corners region, south central Oregon, et cetera).

Other considerations west of the line include limited resolution because of the distance from the Nexrad antenna, intervening terrain, or curvature of the Earth. These limitations all affect Nexrad, and in turn, WARP.

Three levels of intensity are displayed by WARP, including “moderate,” “heavy,” and “extreme” precipitation. Although WARP uses different colors and display patterns than a pilot would be accustomed to, that in itself is not significant. What is important is that pilots are able to quickly correlate the nomenclature issued by the controller to what is being observed on the aircraft radar display. Thankfully, the “thresholds” within WARP are somewhat similar to most traditional aircraft weather radar systems so it is fairly easy to do.

“Moderate” equates to yellow on aircraft radar; “heavy” to red; and “extreme” to magenta (for those lucky enough have magenta displayed as a level of precipitation instead of as turbulence). This is not an exact science, but a technique to begin trying to form a cohesive picture of existing weather and its intensity as viewed by different systems.

WARP, like aircraft weather radar, cannot distinguish between stratus and convective precipitation. The pilot (or controller) must have an idea of atmospheric potential. If that sounds complicated, it is not. A 30-second glance at any number of products available on the web will provide the necessary information. The Convective Outlook available at www.spc.noaa.gov is a great place to start.

However, a limitation of WARP is that the controller cannot tell where within the selected block the precipitation resides. That is why you may get an advisory for weather that is not a factor for you, or perhaps not even visible to you, cruising along at FL410. Nor does WARP provide the echo tops to controllers. The controller can get that information, but not from the WARP system. Time (and radios) permitting, always provide the controller with a report of the estimated tops. Both the controller and other pilots will appreciate it.

WARP can provide useful information to assist pilots in making weather-related decisions. One limitation of aircraft radar is that it is prone to the “dispersal effect,” meaning very intense cells viewed at great distances tend to be understated. A common way this will manifest itself is when approaching a line of weather. Close cells appear strong, but cells down the line, in the distance, appear to be weak, so pilots will turn toward that apparent area of less intense cells with a plan to transit the line in that area. However, as the area is approached, cells are displayed progressively stronger and a safe avenue across the line is nowhere to be found. Verifying, via in-flight Nexrad or WARP, what appears to be an area of weaker cells in the distance (in a line or otherwise) is a good technique to counter the dispersal effect.

Aircraft weather radar is particularly susceptible to precipitation attenuation (weakening of the radar energy). One way this can manifest itself is that a significant mass or area of very dense, hazardous cells can appear on the aircraft radar as a thin band of weather—something that could be transited quickly. Don’t bite! Pilots properly trained in the use of radar will know how to look for a shadow but also, the controller may be able to assist. Ask how many miles the weather extends (i.e., in range, in front of the aircraft) or if there are multiple lines, one lying behind another.

For those of you who have the luxury of having on-board Nexrad, use it in a similar manner; for strategic planning, not tactical maneuvering in an area of hazardous convective weather. Although onboard Nexrad is fantastic technology, remember that it augments aircraft radar but does not replace it. Also, vendors of Nexrad products may disseminate the Base Scan, or Composite Scan, or both—make sure you know which you are viewing.

For users of ADS-B weather, that system is not only exposed to the same geographic gaps and latency inherent in the Nexrad system, but additionally, gaps in ADS-B coverage. This limitation, as well as others specific to that system, must be understood in order to properly employ the information it provides.

And finally, should you find yourself in an area of dynamic, rapidly changing weather, don’t be surprised if the information provided by the controller via WARP and onboard Nexrad agree, but conflict with what is displayed on the aircraft radar. Remember, the on-board radar provides true, real-time information.

Each of these systems—Nexrad, WARP, and aircraft weather radar—possess unique limitations. Using them together, synergistically, provides the best information upon which to make weather-related decisions. Equally important is having the technical skill to translate and correlate what they each communicate as well the ability to mold that information into a cohesive picture.

Erik Eliel is a pilot for a major airline and president and owner of Radar Training International.

In the past, the use of in-flight Nexrad weather technology was plagued with abuse. Albeit not necessarily intentional, the abuse was caused in part by a lack of education regarding Nexrad limitations, exacerbated by misguided early marketing efforts that advertised it as either “real-time” or “up-to-the-minute” weather; it is neither, nor has it ever been.

Possibly turning the tide to getting Nexrad back on track to being used correctly as a strategic tool was NTSB Safety Alert SA-017. All pilots should be familiar with the details of this document. To summarize, it addressed the latency of in-flight Nexrad products, highlighting that Nexrad does not display what the weather is, but rather what the weather was a few minutes prior. WARP, being a Nexrad-based system, possesses some of those same limitations. 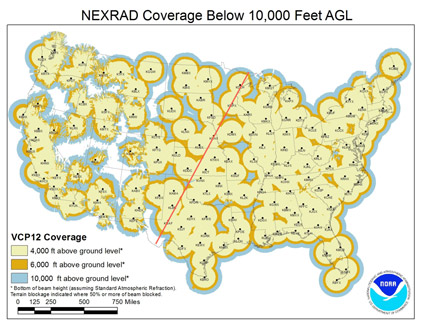 Maximum operational range above 10,000 feet for each site (volume coverage pattern 12) is annotated in blue. East of a line extending from approximately Minneapolis to Midland, Texas, Nexrad (WARP) coverage is robust and redundant. West of that line, there is limited redundancy and numerous large geographic gaps.