Editor's note: This article has been updated to reflect developments reported as of July 9.

A father and son were killed when their Cessna 150 and a U.S. Air Force F-16 collided just after 11 a.m. on July 7 over Moncks Corner, South Carolina. Teams scoured marshland and lake for more than 24 hours to find both missing men; the F-16 pilot ejected and was not seriously hurt, according to the U.S. Air Force.

Witnesses described a broadside collision and a fireball, pieces of both aircraft scattering in the sky. The county coroner confirmed July 8 that Michael Johnson, 68, and his son, Joseph Johnson, 30, were aboard the two-seat Cessna. Family members told a local television station that Joseph Johnson was building time toward a commercial pilot certificate, and flying his father to Myrtle Beach with plans to continue cross-country from there. Local media reported the grim discovery of the pilot July 9; both missing men had been found the day before.

The F-16 was flown solo by Maj. Aaron Johnson, according to Air Force officials who spoke at a July 7 news conference.

No one on the ground was hurt, though debris was scattered over a wide area.

Air Safety Institute Senior Vice President George Perry, a retired U.S. Navy fighter pilot, said collisions between military and civilian aircraft are extremely rare, though vigilance remains of paramount importance and there are steps general aviation pilots should take to minimize the risk. Among them, VFR flight following and ensuring that the transponder is always on increase a GA aircraft’s electronic visibility.

“Any time aircraft that have vastly different performance envelopes share airspace, it’s especially important for all involved … to be especially vigilant, communicate intentions, and do everything possible to sanitize the airspace to avoid these types of tragedies,” Perry said.

While much remains unclear about the circumstances of the July 7 accident, Perry said GA pilots who have not incorporated Automatic Dependent Surveillance-Broadcast technology should consider the situational awareness benefit—whatever particulars the investigation will eventually reveal.

“Although ADS-B In is not a requirement of the 2020 mandate, having TIS-B traffic awareness information in the cockpit will change a pilot’s perspective and give them the tools needed to mitigate many of the risks associated with midair collisions,” Perry said “For ADS-B In traffic information, there are both certified boxes and noncertified, low-cost portable solutions. Whichever a pilot chooses, It’s a small investment in safety when one considering the possible alternatives.”

More than one witness on the ground described clear views of both aircraft just before impact, though details about the flight visibility and other crucial factors had yet to be made known July 8. The Cessna had reportedly launched from Berkeley County Airport shortly before the collision. Air Force officials told the media that the F-16 pilot was flying an instrument training mission and communicating with ATC. Perry noted that most military training routes are flown at low altitude, often 500 feet agl or lower, and general aviation pilots should avoid extended flight at those altitudes. 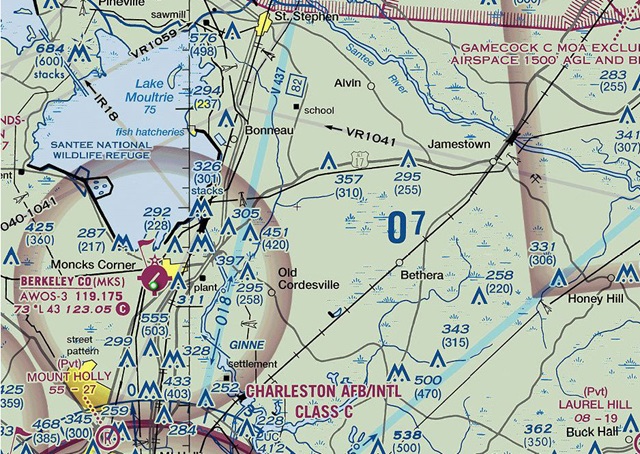