Get the app Get the app
AOPA will be closed July 4th, in observance of the Independence Day holiday. We will reopen at 8:30 am ET on Tuesday, July 5.
News & Media Avidyne joins the wireless game 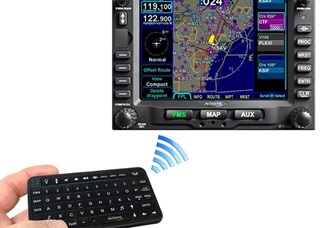 A trend is emerging from the news releases pouring from EAA AirVenture 2015—a theme of connectivity. Avidyne Corporation is opening its glass cockpit system to developers—even hobbyists—to stream wireless data to smartphones and tablets. Avidyne’s IFD540/440 models featuring touchscreen controls for systems including flight management, GPS, navigation, and communication have Bluetooth and Wi-Fi as standard features. Those are the units that will stream data to portable devices running applications for aviation.

Avidyne announced a software developer kit to third-party developers and hobbyists for the creation of apps using the data. The company said it is already working with several developers. Avidyne President and CEO Dan Schwinn said in a press release that the data is available not only to developers, but to students, flight schools, and anyone with a new and innovative idea for an application. Flight schools could use the data for electronic logbooks and fleet tracking.

The company will make two different development kits. Tier 1 developers creating read-only applications (those that receive data from the wireless data stream) will be able to register, accept the licensing agreement, and download the kit from the Avidyne website.

Tier 2 developers planning to create read/write apps (those that send data back to the IFD540/440 units), will be required to complete a more thorough vetting process and testing protocol.

Avidyne expects the Tier 1 kit to be available in late summer or early fall 2015. Tier 2 developers should contact Avidyne, according to the press release.

In other news, a computer simulator for the IFD540/440 is now available on the Avidyne website.