Get the app Get the app
Already a member? Please login below for an enhanced experience. Not a member? Join today
News & Media L-3 debuts Genesis electronic standby instrument system 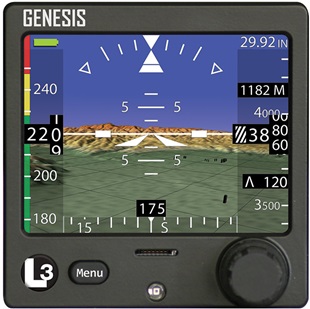 L-3 Avionics showed off its new, full-featured electronic standby instrument system at EAA AirVenture July 20. Dubbed the Genesis ESI-500, this instrument is basically L-3’s already-popular Trilogy on steroids. The base unit runs $6,100, but the add-ons can turn the Genesis into an all-in-one display that can act like a small version of a high-end primary flight display.

For example, heading information on a horizontal indicator tape can be added by purchasing L-3’s MAG-500, $1,570 magnetometer. Software to provide synthetic vision and terrain and obstacle warnings lists for another $1,300. And navigation software listing for $670 will let you shoot ILS and GPS approaches—all on the same instrument. The instrument fits in standard panel cutouts, L-3 said.

Standard features include altitude and airspeed tapes, a vertical speed indicator, a slip-skid indicator, and track information. The ESI-500 also comes with an internal lithium battery that will power the instrument in the event of a loss of ship’s power.

AOPA Pilot Editor at Large
AOPA Pilot Editor at Large Tom Horne has worked at AOPA since the early 1980s. He began flying in 1975 and has an airline transport pilot and flight instructor certificates. He’s flown everything from ultralights to Gulfstreams and ferried numerous piston airplanes across the Atlantic.
Go to Thomas A. Horne's Profile
Topics: Events, EAA AirVenture, Avionics