In a departure from his long-held practice of keeping his airplane projects secret while still in development, Burt Rutan used a public forum at EAA AirVenture on July 22 to reveal details of the SkiGull, an ultra-efficient, long-range seaplane capable of landing on asphalt, grass, snow, or water. 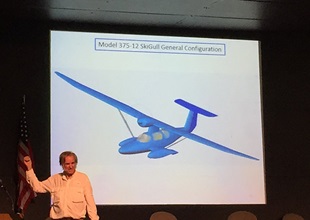 "I've been working 18-hour days in an effort to fly the airplane to Oshkosh," he told an audience of about 300 people. "But I realized three weeks ago we weren't going to make it."

The airplane nearing completion at Rutan's home is a two-seat (tandem), high-wing, Rotax-powered, strut-braced, composite seaplane with a trimaran hull and a wheel/ski combination designed to operate from any surface. It's also extremely sturdy and efficient with a goal of being able to operate off rocky beaches, in large swells, and in saltwater, and have enough range to fly nonstop from Hawaii to California.

Rutan gave a 1.2-hour presentation on the SkiGull that included construction photos and detailed drawings and performance estimates. He cautioned, however, that the prototype hasn't flown yet, so "this could all be BS."

Still, Rutan's dedication to the project and his enthusiasm came through loud and clear to the overflow audience.

"I'm going to go home, work at a slow pace, and do the test program right," he said. "We'll invite the Icon people to come over and have a fly-off as some point."

The SkiGull will be able to operate in ocean waves, travel 140 knots at high cruise (177 knots at high altitude if turbocharged), be almost silent at low power, and use composite parts that won't corrode in saltwater.

The airplane will use skis with hydraulic shock absorbers for water takeoffs and landings. Four small (4-inch diameter) wheels will protrude from each ski for hard-surface landings, as well as a tailwheel for ground steering.

Rutan estimates it will take off in 12 seconds after a water run of 460 feet.

The SkiGull has a 47-foot wing span and folding wings. It's designed for ground transportation without a trailer, and it's meant to operate away from airports. He selected the Rotax engine because it runs best on auto fuel and not avgas.

The airplane's high-aspect-ratio wings and T-tail give it the appearance of a motor glider. It has a 44-percent-span Fowler flap placed at the center of the wing to provide extra lift at high power, and a pair of electric motors with reversible propellers to simplify docking and provide a power boost (if desired) at takeoff.

"I've worked at airports since 1965," said Rutan, 71. "I realized (during the course of this project) that I don't like airports."

The SkiGull cockpit has a side-stick controller and plastic rod-ends that won't rust in saltwater.