Joe Dory IV is an accomplished backcountry pilot, flying a Super Cub and a Hughes 500 for a living in Idaho, but he admitted he was a little nervous about the task at hand: competing in the short  takeoff and landing (STOL) event at EAA AirVenture before thousands of pilots July 21.

It was Dory’s first STOL competition. He and the other pilots in the competition were sizing up the winds and planning their technique. “Today, if there’s a little crosswind, it’ll be a wheel landing, a modified wheel landing, tailwheel low,” Dory said of how he planned to touch down in the Cessna 180.

Dory had reason to be nervous. He would be flying against other highly skilled pilots including Shawn Holly of Soldotna, Alaska, who has won his category (light touring) in the Valdez Fly-In and Air Show STOL competition the past five years in a row. Flying a Cessna 170B modified with a 210-horsepower Continental IO-360 engine, bush tires, and a Sportsman STOL kit, Holly once performed a 76-foot takeoff and 104-foot landing at Valdez. 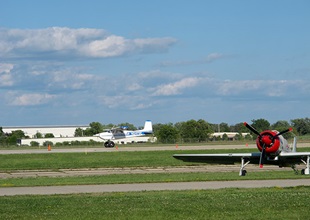 Dory’s father, Joe “Pops” Dory Jr., watched proudly from the flight line as the pilots made two circuits around the pattern. Although Pops had introduced the younger Dory to flying, it was son who turned his father onto backcountry flying. Pops competed in the first heat on July 20 in an experimental Super Cub.

During both days of competition, pilots faced tricky crosswinds that approached some of their aircrafts’ maximum demonstrated crosswind components. The pilots were flying in either bush or tour categories for bragging rights, but they each seemed to enjoy the good-natured competition as they joked with one another.

Dory said the camaraderie among bush pilots, as well as the ability to fly in and land where he couldn’t walk or drive, are two of the attractions of bush flying.

Ed Doyle of Manhattan, Kansas, and Mike Olson of Yakima, Washington, share that sentiment. Olson built his experimental aircraft, Cuzoom, from scratch in just a year and a half and had Doyle fly the aircraft in Valdez in 2011 when they won their category with a 42-foot takeoff and a 35-foot landing. “That’s why I call him the hired gun from Kansas,” Olson said of Doyle. Olson’s shortest takeoff in his 20 years of bush flying is 43 feet, and the shortest landing is 50 feet.

Doyle competed at Valdez from 2008 to 2011 but took a break because 3,500 miles is a long way to fly for two circuits around an airport, he said. However, he plans to compete next year. “It’s become like a big family,” he said of the STOL competition that takes place the second week of May each year in Valdez. The competition started in Gulkana, Alaska, decades ago before moving to Valdez. 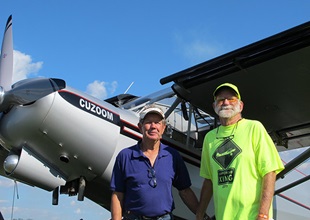 If the competition is like a family, then Jerry Burr is the patriarch.

Burr flies his certified albeit modified Piper J-3 Cub, White Hawk, from Washington to Alaska to compete in the STOL event. One pilot told Burr that he remembered watching him fly 36 years ago at the Gulkana event.

When it comes to technique, he is the pilot to watch, according to many of the participants at EAA AirVenture. Burr’s personal best while practicing for a competition was a 17-foot takeoff and a 24-foot landing, he said. He’s also been known to touch the wheels, stop without rolling forward, and turn off—once prompting a bunch of friends watching at the airport to get on their knees and bow down.

Burr said competitors used to take off tail low, or three point, until he “discovered that if I took the tail up first, [I] could save 15 feet.” That technique is very popular among competitors today, he said, but he’s changed his mind and has gone back to a three-point takeoff “because it works best.” Burr said he also prefers three-point landings because he can come in at the highest angle of attack and slowest airspeed, allowing him to land in the shortest distance.

The precision of these pilots takes practice—Pops said he practices every day. The key, according to the pilots, is to “get very competent in your airplane,” nail your airspeed and touchdown point, and get comfortable maneuvering in slow flight.