Get the app Get the app
AOPA will be closed July 4th, in observance of the Independence Day holiday. We will reopen at 8:30 am ET on Tuesday, July 5.
News & Media Flying with fire 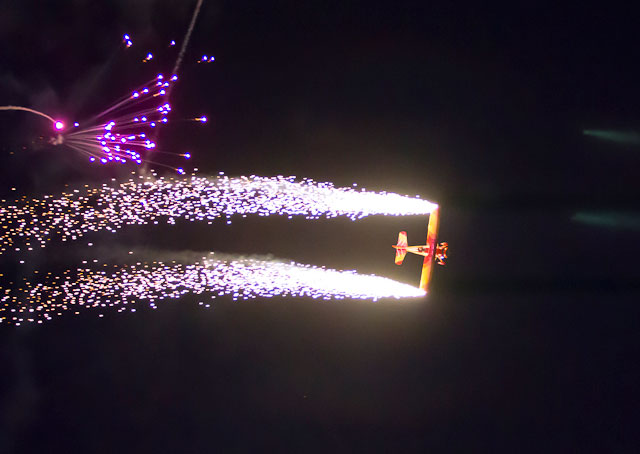 If strapping live fireworks to an airplane wing sounds intrinsically dangerous, it apparently once was.

The night airshow, featuring flights spitting sparks that streak across the sky, is a visual treat that dates to the 1920s, when brave barnstormers attached railroad flares to the struts of their Curtiss Jenny biplanes—a feat captured in pictures that were uncovered in research by modern airshow performer Steve Oliver, who re-lit the fuse on modern night shows along with Gene Soucy back in 1989.

The two pilots, working independently, picked up the (spark-spewing) baton four years after the death of airshow legend Art Scholl, who had in turn followed the lead of 1920s pilots like Clyde E. “Upside Down” Pangborn and “Loop King” Billy Brooks—the aforementioned Curtiss pilots whose after-dark aerial feats Oliver uncovered in his research.

“As primitive as it may be, you have to give them credit. There were two of them doing it together,” Oliver said in a telephone interview. “It’s really hard to do anything new in this business that hasn’t been done before.”

Oliver flies SkyDancer (a de Havilland Chipmunk) at airshows across the country, and has long been partnered in life and aerobatics with Suzanne Asbury-Oliver, who is also a famous airshow performer and skywriting pilot. (They married in 1982 after meeting the year before at the Kentucky Derby, and continue to fly skywriting and airshow gigs today.) 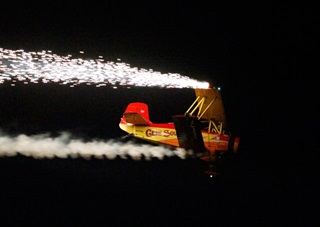 When Scholl began flying night shows in 1974, he was alone in the night sky, reducing the degree of difficulty, somewhat, while he closed a half-century gap in the art of aerial pyrotechnics. Oliver has never found a specific explanation for the hiatus in night airshow performances, though one can surmise that unshielded railroad flares proved to be incompatible with early airframes. The modern show pilot has much more sophisticated incendiaries to work with, and firing rigs and launcher racks that are usually custom designed by pilots themselves or team members or consultants with electrical engineering experience. In Oliver’s case, the fuses are all safely disarmed by a triple-redundant switching system that is not armed until he’s up at altitude and throws a pair of grounding switches.

Contrary to what some might surmise, the FAA has a relatively small role to play in approving night displays, though other federal agencies oversee the acquisition and delivery of the fireworks that are often a key ingredient. (The Aeroshell Team relies on lights and smoke to create a dazzling display.) Some performers buy their fireworks off-the-shelf, while others have their pyrotechnics custom-made (as is the case with Oliver) to exacting specifications.

State agencies may add another layer of regulation and oversight, though Oliver said that there again, once the fireworks are loaded on the aircraft, oversight falls to the FAA. For a California airshow this year, to satisfy the most stringent state requirements in the nation, Oliver had his fireworks shipped directly to a licensed handler, who maintained control until it was time to load up for the show.

Oliver said there is no federal aviation regulation that applies to the controlled discharge of fireworks from an aircraft in a properly waivered airshow box, which means the FAA is not in the business of saying “yes” or “no” to night displays.

Weston Liu, a New Hampshire pilot and skydiver who performed in the 1980s and 90s with the Star Spangled Flyers, put his engineering expertise to work rigging a smoke canister system affixed to the landing gear of a Cessna 182. When it came to the Form 337 approval, “The FAA part is really just like any other airplane modification,” Liu said. 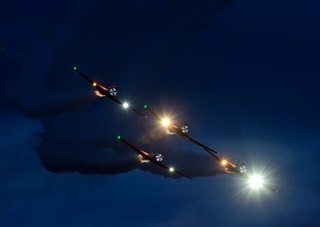 He submitted the paperwork and set up a ramp inspection for local FAA staff, who were most concerned with ensuring the military smoke canister was securely attached to the aircraft and would not fall off. Liu was prepared to answer questions about operating temperatures, how the airframe was isolated from the high-temperature surfaces of the smoke canister, electrical and aerodynamic loads—none of which were asked.

“The local fire marshal is concerned as long as it’s in the parking lot,” Liu said, referring to the pyrotechnic package. “Once it goes on the airplane they don’t care. Really the rule is, don’t hurt anybody else.”

The U.S. Department of Transportation and Bureau of Alcohol, Tobacco, Firearms and Explosives both have had oversight, though DOT is concerned only with shipping dangerous cargo using proper declarations, markings, procedures, and carriers, and while ATF has tight control over explosives of various kinds, that agency classifies fireworks of the type used in night shows today in a different category from more powerful pyrotechnics. Since the terrorist attacks of Sept. 11, 2001, tighter regulations have required a more modest approach to pyrotechnic displays.

“Now we’ve had to go down one class to what would be considered roadside fireworks,” Oliver said. Some acts use pyrotechnics designed for stage shows, firing from canisters that stay cool enough to hold in one’s hand.

It is in the cockpit, performing the first show, that a pilot will typically discover the difference between “can” and “should.” Oliver described a flight with an unnamed airshow performer who was interested, many years ago, in developing a night show, but appeared to lose interest after seeing one in action.

“Yes, there’s definitely, from the pilot’s standpoint, a different perspective at night for a couple of reasons,” Oliver explained. For one, the bright flashes of light can be blinding when reflected off the canopy. Oliver relies on a combination of some ambient light in the cockpit and having the tower turn the field lights to maximum brightness to offset the effect.

Locations where the ground lighting is limited or absent pose a special challenge.

“It would literally be like closing your eyes,” Oliver said. “The first few times that I did that, it was kind of unnerving.”

The International Council of Air Shows sets the standards for airshow performers, and requires a higher minimum altitude of all pilots at night, at least 500 feet, regardless of their demonstrated daytime competency. That is because depth perception gets lost in the darkness.

Rigging the Chipmunk with fireworks is a labor-intensive process.

“It takes me about six minutes, seven minutes to shoot off my pyro,” Oliver said. “It takes eight hours to wire it.”

Oliver said he recently developed a new, custom-designed rig that significantly streamlines the airflow—and no longer slows him down by as much as 60 knots.

“I now barely even know they’re out there,” Oliver said. “I’m now able to safely do a lot more aerobatic maneuvers.”